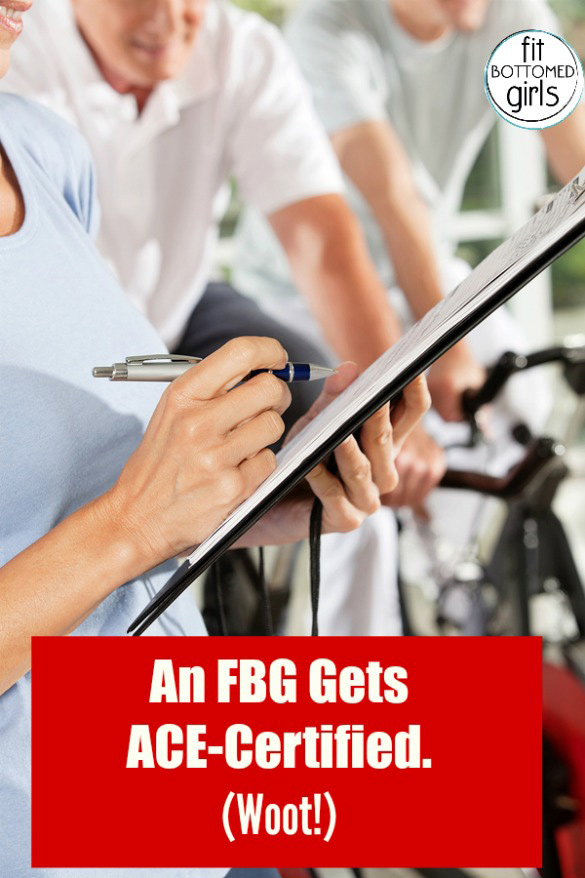 Remember when I told you that I was going to get all super legit and get my personal trainer certification from the American Council on Exercise? I don’t blame you if you don’t remember; it has been coming up on a year now. But the big news is that I passed my test last week! Cue the trumpets! Toss some confetti! Take off your sports bra and throw it to the fans! (Okay, that might be going a bit far.)

It’s quite a relief. I mean, when those two big books landed on my doorstep last year, I was a bit intimidated. It had been a long while since I took a test of any kind (those Buzzfeed quizzes don’t count, unfortunately), so I was a bit overwhelmed by all of it. There was so much anatomy, and so much physiology that I didn’t know. I’m decidedly more of a “word girl” than a scientist, and it’s hard to be motivated when you’re not attending a class or getting tested periodically. Plus, I don’t exactly live in an environment that’s conducive to studying.

I mean, I was pregnant for the first half of the time I was studying, so I’d fall asleep a couple of pages in when I’d sit down to study at the end of a long day. Then my beloved best beast died, and I was too distraught to crack a book for a month. And then I had my third child in September, so again studying just wasn’t a priority. But I took my time and kept plugging along, even if it was a couple of pages at a time. I wanted to be sure that I wasn’t just “passing the test,” but that I was actually getting something out of it. I wanted to be sure that I was actually more knowledgeable by the time I took the test so that I can better motivate and help the readers of this site and those who benefit from other projects we sink our fit bottomed teeth into in the future.

I knew going into the test that I’d learned a lot in my many moons studying, but I wasn’t sure if I’d pass. I’d felt like the world was conspiring against me and the test. I’d sit down to study at night and as soon as I’d crack the book, a kiddo would need my attention. Then I almost messed up getting my CPR certification. Then the night before the test, I was filling out paperwork for my youngest to go to daycare and had missed the form about immunizations. My doctor takes at least a week to do paperwork like that, so I had a panic that they wouldn’t let us come because we didn’t have her medical records. Luckily I was able to scrounge up insurance documentation showing that she had been immunized, so I had something to show and that something was enough. PHEW.

The test itself was a little tricky, and I was happy to hit “submit” at the end. Unlike when Jenn got certified back in the stone age, I knew within a minute whether I had passed — no waiting for a letter in the mail. I was able to skip out of the building, shaking my gluteus maximus the whole way. (That’s the fancy word for butt.) I’ll share some tips with you in a later post if you’re interested in becoming certified or are studying for the test, too. For now, I’m going to work my brain a bit less and work my body more!

Have you had a recent success lately? Share it! —Erin