Ever had a question similar to this?

“I started riding my bike last year while training for my first sprint triathlon. This year, I’d like to do a century ride. There is a weekly group ride with my gym I want to train with, but I’ve never ridden with others. What do I need to know before I go?”

If you’re training for a century ride (also known as a 100-miler), group riding can be a lifesaver, literally and figuratively. A group of cyclists, also known as a peloton, can be easier for drivers to see than an individual cyclist, increasing the likelihood cars will move over to pass you safely. A group also aids its riders when one has a flat tire or runs out of nutrition during a ride. Most importantly, groups work together — when one rider is tired or struggling, he or she can tuck behind another rider to conserve energy (this process is known as drafting, where the front rider blocks the wind for the person behind, reducing air resistance). This is especially helpful when doing rides lasting many hours.

But group riding can also be unsafe if riders don’t follow group etiquette. Before you saddle up with your training partners, here’s what you need to know. 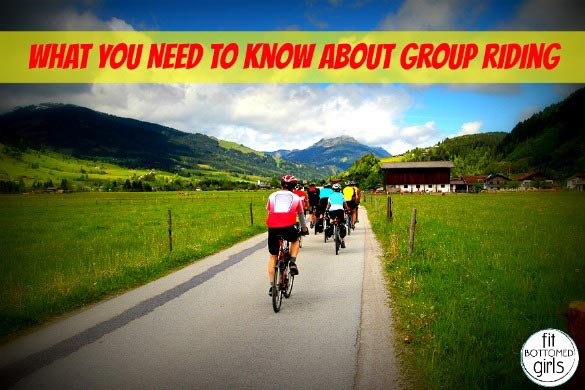 1. Be honest. Group rides are not the time to fake fitness. Ask someone in the group for the average speed of the ride. If they’re barreling down the street at 18 miles per hour and you’re averaging 15 on a good day, find a different group or ask if there is a “B” group (sometimes groups follow the same route, but split up into two different groups based on speed). There’s no shame in being a different speed. Put in the time and hard work, and you’ll be in the 18-mph group before you can say “Tour de France.”

It’s also important to let others know you’re new to riding in a group. There’s no shame in being a newbie! In fact, groups appreciate knowing there’s a new rider in the midst. In addition to going out of their way to welcome you, they will be sure to notify you of any special information about the ride, like planned stops or special hand signals.

2. Know the signs. Because your ears will be filled with wind and traffic, your fellow riders will communicate with you using hand signals. When you see the rider in front of you give a sign, copy that same gesture so the rider behind you knows what is up ahead. The gestures get passed down to the end of the group. Some common gestures: 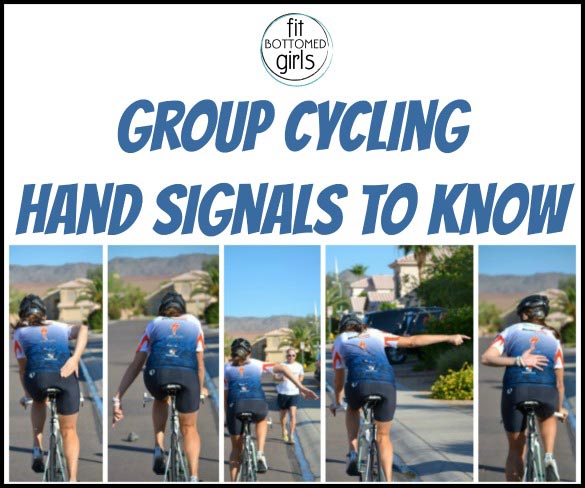 3. Don’t be an asshat. Pardon my French, but it needed to be said. Common sense should prevail whenever you’re riding in a group. Carry enough nutrition and hydration to get you through the ride. Always bring a spare tube and air supply in case you get a flat tire. Though your fellow riders will help you out in extreme circumstances (say, you get more flats than you have spares), they are not your pack mules.

Also be aware of your impact on your fellow riders. If you’re not confident in your bike-handling skills, stick to the back of the group. If people are taking turns at the front (known as “pulling,” because you’re pulling the rest of the group into the wind), take your turn so your other riders can conserve their energy for a few minutes. If you’re a triathlete with aerobars on your bike, never, ever, ever get into aero position while riding in a group. Never. Did I mention NEVER, EVER, EVER? It’s less stable than riding upright, and in a group, you’ll need to have your hands over your brakes at all times, in case you need to react quickly.

4. Be social. Some group rides are full of Chatty Cathys. Others remain silent while they chase each other up, down and around mountains, preferring to save the social hour for the post-ride breakfast. Whatever the tone of the group, match it. When you’re struggling to keep up with the group, let one of the riders know. Usually one or more will stay behind at your pace to ensure you get back safely. Repay the favor if you see another rider struggling. It’s good karma.

Don’t hide in the back by yourself because you don’t know anyone, and don’t pack your bike and leave as soon as the ride is over. You’d be surprised how much you can learn about a person just by riding side-by-side. Some of my most profound lessons and happiest memories have taken place in the midst of a peloton. 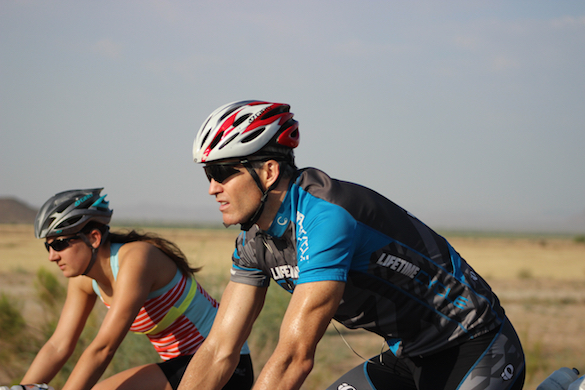 In a group ride with my husband, Neil. If you squint your eyes and turn your head, it almost looks like I’m faster than him, right?

5. Have fun! Group rides used to intimidate me. I always thought I was too slow and didn’t want to sandbag my friends. Once I got over my fear, however, I realized riding with my friends was not only a blast, but was actually making me faster. The group setting is a fantastic way to build fitness and log serious miles on the bike while having a great time. Turn off fear and show up with a smile. You won’t regret it.

Have you trained with a group of cyclists before? What tips do you have for new members of the group? —Susan