I’m really enjoying the triathlon off-season this year. I’m still getting out on my bike now and again, and I’ve gotten in some great runs this winter, but I’ve also been making yoga, strength training and dance classes a much more regular thing. Specifically, I’ve been hitting hip hop classes as often as I can — usually around once a week, depending on my schedule.

And I’m LOVING it. It’s got all the sass and fun of Zumba, but the moves are more reminiscent of what I grew up doing to, like, Heavy D & the Boyz or Digital Underground. You know, lots of popping and pumping and jumping and attitude. Have I mentioned how much I love it?

So, the other night, after running into a few technical issues while trying to play a workout DVD (THANKS A LOT FOR BEING IN RETROGRADE, MERCURY), I decided to, well, not just stand there; bust a move! I put on some dope tunes (specifically, the “Y’all Ready for This: ’90s Jock Jams” station on Songza) and worked up a crazy sweat in just over half an hour. Turns out that my version of “dance like nobody’s watching” is … intense.

Now, it’s probably obvious, but this dance and strength workout is entirely what you make it. If you want to break out the Roger Rabbit and Running Man and body rolls and whatever other moves you’ve got in your arsenal and go all out (plus throw a variety of different strength moves in between), you will be exhausted by the end. I promise.

But, if you’re looking for something a little more beginner-friendly, just take the intensity down — maybe do moves that really raise your heart rate just during the chorus of each song and stick to grapevines and step-touches in between, and when you’re doing the strength work, take it nice and slow, focusing more on form than number of reps. As long as you don’t stop moving, you’re rockin’ it. 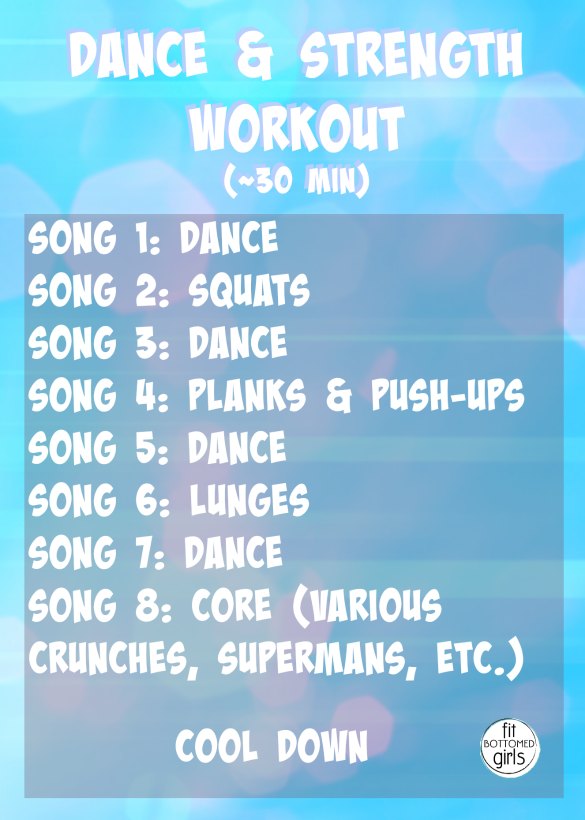 What songs would you put on your playlist for this? If you need inspiration, we’ve got some pretty great suggestions!  —Kristen

Find more workouts you can do at home in The Fit Bottomed Girls Anti-Diet!