Today’s hilarious excerpt is from Una Lamarche’s book, the title of which alone should make you want to pick up a copy: Unabrow: Misadventures of a Late Bloomer. Any book that has a unibrow-ed girl as adorable as this on the cover is one I want to read. Particularly when it includes brutally honest and hilarious accounts of parenting and life, like the excerpt below. 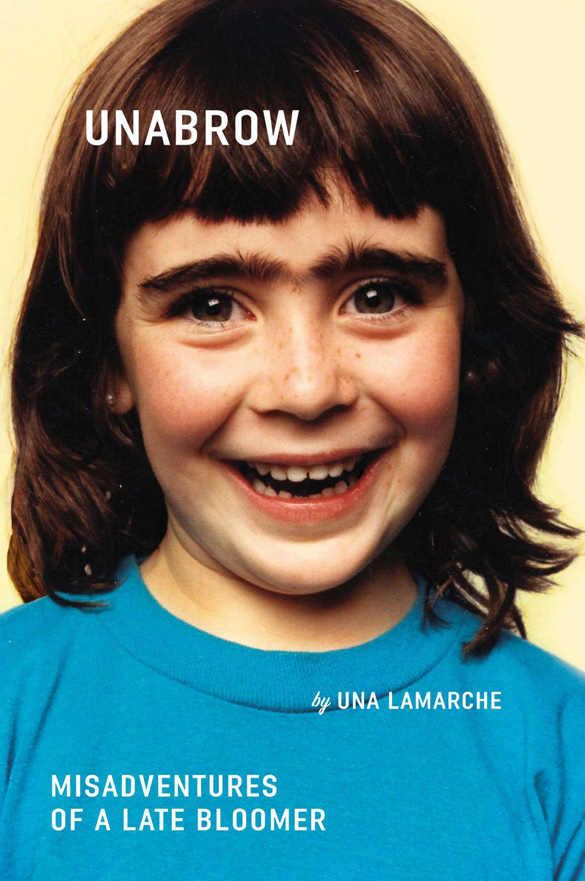 I don’t dole out much parenting advice as a rule, largely because I have only one child, who isn’t even old enough to spell, much less shout creative expletives at me, and I still spend most of my days feeling like a complete and utter fraud and failure.

Before Sam was born, I fetishized parenthood as a kind of beatific state that involved a lot of staring down at a swaddled, sleeping child while visitors arrived bearing gifts of wine and foot-long sandwiches.

It doesn’t help that my mother has what is either the world’s most selective memory or the patience of Job waiting in line at the DMV. She was one of the original attachment parents, a baby boomer brought up in an emotionally barren household who had attended many years of Reichian therapy in pursuit of her goal to love and bond with my sister and me to an absurd degree.

This meant that I was held constantly, that I slept in bed with my parents well into kindergarten, and that I breast-fed until I was four years old. (Or five, maybe. My mom has always been fuzzy on the exact math, but I choose to go with four, because as it is, people tend to look so shocked that I’m afraid their lower jaws might actually fracture were I to add a full year to my tenure of latching on to what I liked to call “nippy.”) Mom says she tried to convince me to wean at age two, but that I refused, arguing, “But, Mommy, I like it.” Incidentally, this is also why I refuse, as an adult, to go on any diet that excludes alcohol.

When I ask my mother if any of her sacrifices — being regularly kicked in the face during slumber, being suckled like a Holstein into her forties — took a toll, she always smiles brightly and tells me that she loved every minute. So that’s how I entered into motherhood. Completely excited, naively confident, and totally fucking deluded.

To say that my first weeks as a mother failed to live up to my expectations would be a staggering understatement. First of all, in my visions of postbaby rapture, I always pictured myself in a flattering maxidress that clung to my newly bountiful cleavage in a manner that would remind my guests of Halle Berry emerging from a waterfall in a string bikini. Instead, I wore what amounted to a diaper made of enormous maxipads, held up with mesh boxer briefs.

I also, freakishly, lost my appetite, so the plentiful gifts of banana breads, casseroles, and lasagnas were wasted on me. I didn’t glow; I withered. I looked pale and sad. I was too tired to do much besides sit on the couch holding my son and looking overwhelmed. My skin broke out and my nipples, which had up to that point never had to work a day in their lives, literally cracked under the pressure. Approximately eight thousand times a day, after feeding my mewling little miracle, I would alight to the kitchen, where I would carefully dip my breasts first in salted water and then in olive oil. It was sort of like making a sexy bruschetta (aside from the scabs) and it was the closest I came to cooking for a good twelve weeks.

There were bright spots: I rewatched all of 30 Rock and Mad Men and Lost over the course of a month, while sitting and breastfeeding like a really lazy martyr, Our Lady of Perpetual Hulu. I eventually stopped needing adult diapers and didn’t have to wear a bra most of the time. I automatically got free two-day shipping with Amazon Prime just for expelling another human being from my body. It wasn’t all bad. And of course, I loved my newborn son so much it consumed me. It was like a tidal wave of hormones I drowned in, for better or worse. It’s true that for about six weeks I cried whenever the sun set and that I did once add Brooke Shields’ Down Came the Rain to my Amazon cart for overnight shipping. But I didn’t end up ordering it. Postpartum depression is a serious illness, one that I thankfully did not have. What I had, I came to understand over time, was the normal reaction to becoming a new parent, which can be boiled down to a single, haunting refrain: What in the fuck have I done?

The chapter goes on to rail on all of the “helpful” parenting books available to new sleep-deprived parents, why you should stay away Google in the early months with a baby and why parenting is a fake-it-’til-you-make-it kind of deal. In other words: this book is hilarious and right up my alley. Read any good parenting humor  lately? —Erin