To three or not to three? That was the question. As you know, we opted for three; we’re more than 7 months into being a family of five. My husband and I wanted three kids, but we talked about it endlessly to be really sure.

Is it the right decision? Can we handle three? We decided, hey, we already feel outnumbered by two powerful tots, what’s one more? Still, I read endless blog posts on having three kids, more to be ready mentally than anything. The number of kids you want is a very personal decision, but I’ll share my thoughts in case you’re hovering on the line between two and three, too. Spoiler: I can’t imagine life without our third! 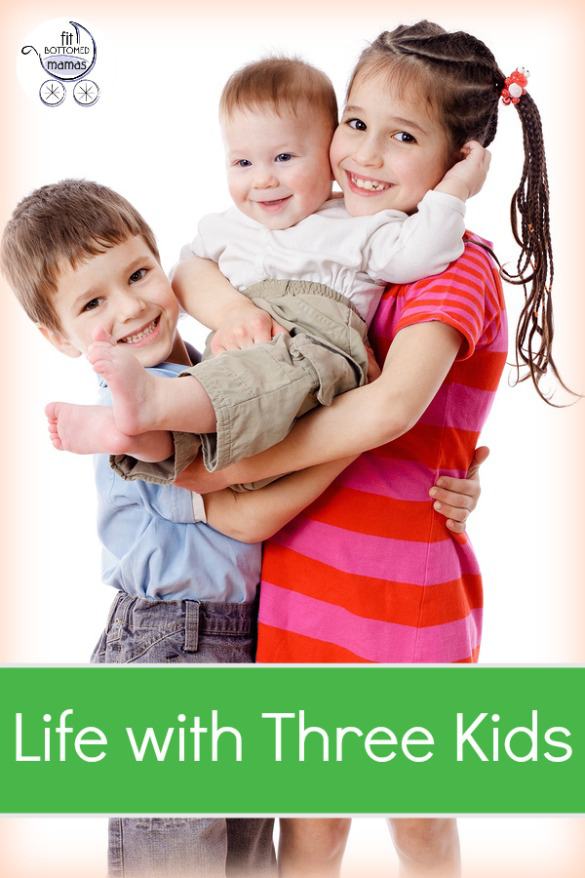 These are not my three. Mine would never look at the camera and smile at the same time.

1. Transition. The transition from two to three was way easier than from one to two. You’ve already established a baseline level of chaos, so you’re used to the demands and chaos that reigns supreme. My oldest was used to being the center of attention when her brother came along, and there were months when we struggled with her being mean to her little brother. But when you’ve got two kids already who are used to playing with each other, they don’t notice the new addition nearly as much. They play (and fight) together but don’t struggle as much with the split parental attention because they have each other. That being said …

2. Delayed reaction. My middle child seemed perfectly happy and disinterested in the baby. But somewhere along the 4- or 5-month mark, he started freaking out on me. He saw my time spent tending to the baby as the time to tantrum. And holy hell, I’ve never seen behavior like this before. It took me weeks to figure out that he was reacting to the baby. That seems obvious, but whereas you might expect a kid to take out frustration on the baby (like my daughter did with him, poking, jabbing eyes), he took out his frustration directly on me. And only me. I’d be in tears because of worry and my husband never even saw that kind of behavior so he was at a loss. It was a very hopeless feeling. I think it was a perfect storm of attention-getting behavior combined with being a 3-year-old, and luckily it’s gotten a ton better. As with any stage, it passed, but when you’re in the thick of things, it can be really awful.

3. A face to the workload. Before the third came along, I struggled to imagine what it would be like to get the big kids ready and have a crying baby to tend to. I couldn’t imagine getting the big kids in the car AND having to get an infant seat in, too. But once the baby arrived, there was a face attached to the added workload so it didn’t seem like work. And as time goes by, the big kids become more independent and life gets easier. Having the big kids potty trained and able to listen to directions helps immensely.

4. They gang up on you. I don’t know how it’s possible that my kids’ bowel movements sync up, but they totally do. I’ll be changing a diaper while getting yelled at to wipe a butt. It’s amazing.

5. Juggle. The hardest part of three is that you’re constantly juggling. When you’re by yourself with three, you can feel like you’re spinning in circles. (See No. 4.) All kids want to snuggle at once OR no one needs you at all. There is rarely a happy medium. Making sure your kids are getting individual attention is hard, but we try to make a point of getting in solo time. Their little personalities come out in different ways when they have one-on-one time.

6. The mess. My goodness, the mess. So now you have three kids to make messes. And boy, do they ever. I’ve usually got someone spilling milk on the floor and then someone spitting up down my back. I’ll get a load of laundry done only to find that my kids have taken off all of their clothes AGAIN. I’ll start unloading the dishwasher only to get interrupted and have to put the baby down for a nap and five hours later the dishwasher remains full. Or the day I clean the kitchen floor is the day someone forgets to make it to the bathroom (TWO FEET AWAY) and pees all over the floor. I feel like I can clean all day and get absolutely nowhere.

7. Speaking of naps … Poor Baby 3. Her naps are perpetually cut short by screams of the big kids or banging from thrown objects or “emergencies” that necessitate busting into the baby’s room just as she’s falling asleep. I feel like I’m always yelling at the kids to be quiet to no avail. It will be nice when we’re down to one long nap a day and we can adjust our quiet times accordingly so it’s not all-day-long quiet time. She also has to sleep on the go a lot more than my other two did — it’s just hard to stay home all day with two big kids.

8. The Easy-Going One. I hear a lot from parents of three that their third was the easiest baby ever. That’s certainly the case for me. Not only is she so relaxed and chill, but as a parent, you know what to worry about and what’s just a phase that will pass. Plus, you know all the tricks that worked to calm and soothe babies, so it takes so much less trial and error to learn what works for your baby. I can see why people have four kids.

9. Four kids. While I have NO plans to have four, I can totally see how the third is the gateway kid to a bigger family. By the time a fourth came along, all of the big kids would play together and keep each other occupied. Kids really do start to run in packs — and the older the bigger ones get, the more they can help you out. I constantly say, I could do another kid, but I couldn’t do another pregnancy.

10. Two kids. While it seems like no big deal now to have three, when I’m down to two kids for whatever reason, IT IS SO EASY. It barely seems like work.

11. Easier than being pregnant. Having my third out in the world is so much easier than being pregnant. Pregnancy fatigue is no joke, particularly when you’ve already got kids to take care of, so once Emery was born, I actually slept better and had more energy despite the round-the-clock baby care. Not having pain helps me be able to chase the kids around and do more. too.

12. Recovery takes longer the third time around. It’s taking me a while to bounce back after pregnancy this time. It took several months to kick the pelvic pain this time around and be able to attempt moves like lunges again. Not only do I have less time for working out, but I’m trying to figure out how to juggle everything. It’s only now, 7 months later, that I’m consistently working out again several times a week. For awhile it was all I could manage to keep us all clean-ish and fed and if I could fit in a walk or a DVD once a week, it was a success. Instead of getting down about it, I knew it would pass and things would get back to normal. And it did.

Honestly, I can’t imagine life without our third now. It seems weird to look at pictures and think that there was a time when she wasn’t here. The older kids are really sweet with her, which is fun to see, and the more interactive she becomes, the more they enjoy talking to her and making her laugh. You can also see how proud they are when they want to introduce her to people. It’ll be interesting when she’s on the move, but she’s also my laziest baby yet and is in absolutely no rush to move and join the fun. PHEW.

Are you considering three? What’s your big fear? Mine was the fatigue, and while it’s a rare night when I don’t get woken up by someone, at this point I’m just used to sleep deprivation! —Erin