I was stoked about getting to check out Erin Dooner’s The Sweet Side of Ancient Grains, a cookbook dedicated to creating healthier baked goods with everything from farro and einkorn to teff and spelt. Her concept is a noble one; replace refined baked goods in the diet with ultra-healthy ancient grains in order to benefit from their high vitamin, mineral and fiber content.
Unfortunately, we, as the reader, are initially informed of the many pitfalls one can encounter when attempting to bake with ancient grains: most markedly taste — as in bad taste! Given that ancient grains “have a very specific and noticeable flavor profile that some may find unpleasant in certain recipes in which the flour’s taste is not covered up by other stronger flavors,” whole-wheat, white whole-wheat and oat flour may be substituted. 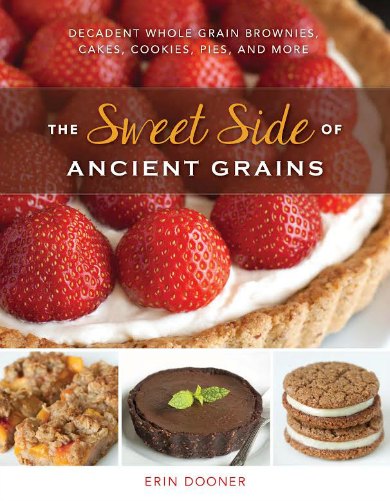 Not a great endorsement for the ancient grains.
The second drawback is that most ancient grains are fairly expensive and hard to acquire in the United States.
The author’s brainchild came when she relocated to Berlin, where hearty white whole-wheat and barely sweet European desserts left her longing for the intensely sweet and decadent treats she grew up with. Her endeavor is by no means (and by the author’s own admission) meant to be a low-fat ensemble of recipes — rather it’s a whole-grain cookbook.
However, baking solely with ancient or even modern whole grains can be problematic. First and foremost is the lack of gluten in the grain. Without gluten for structure, pie crust turns out tough — not tender, cookies mealy — not chewy and cakes dense — not delicate. (Gluten-free bakers most often add xanthan gum to help mimic the structural characteristics of gluten.)
I first whipped up a batch of Oat Flour Cheesecake Brownies and thanks to the lack of gluten in the oat flour, was rewarded with a fudgy block of chocolate and cream cheese that in no way resembled a brownie, or at least the one I craved.
My next attempt: Quinoa Blueberry Peach Ginger Crumble required a scant half-cup of quinoa flour along with rolled oats. (I dutifully toasted the quinoa flour to avoid the “bitter, unpalatable taste” associated with said grain.) The lack of gluten did not adversely affect the outcome of the crumble topping and the flavor of the toasted quinoa flour was not disagreeable. However, with a suggested serving of eight to 12 per an 8x 8 baking dish, the amount of nutrients derived from the addition of quinoa was minimal and hardly worth the effort.
Try as I might I could not get excited enough about baking with ancient grains to attempt a third recipe.
Maybe I’m a purist when it comes to baking, or perhaps my German heritage prevents me from finding fault with a simple fruited kuchen. If the author’s mission is to advocate whole grains, I feel that this book missed the mark. Instead of disguising wholesome grains with sugar and fat, why not welcome their unique, nutty, earthy flavors into the diet through other means? I applaud her effort, but think the ancient grains might be best left for more savory fare.
Are your dessert choices an all out extravagance? Personally, I prefer the European style of barely sweet treats. —Karen