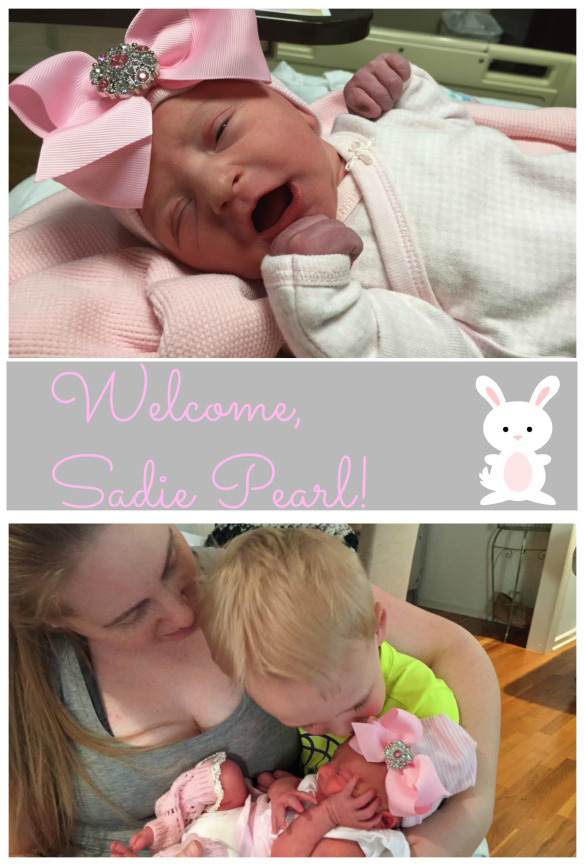 We were admitted into the hospital the evening before to start Cervidil. Although I was 39 weeks, 4 days, I had onset preeclampsia for a few weeks and my doctor didn’t see a need to push me any longer and endure the complications I did with Evan. So, there I lay, unable to move for at least an hour, trying to thin out my cervix. I was still extremely closed off and barely an inch dilated. I had a long way to go. Jake and I sat and watched a movie, read our magazines and did whatever we could to keep from being bored. What that meant was he slept, and I lay awake listening to our sweet girl’s heart beat and the buzzing of the machines.

At 6 a.m. on March 30, the Cervidil was removed, and I was able to shower. Anyone who knows me knows that means my hair needed to be curled. The nurse laughed; Jake just rolled his eyes. This wasn’t new to him; he knows if I shower, I blow dry and curl! That and mascara are my most important to-dos in the morning! The nurse was sweet and gave me an hour; after all, Mommy has to look good for her princess!

Once I was back in bed, that was it. The nurse checked me and we learned my cervix had not taken to the Cervidil much, even at all. I was barely soft and had made little to no progress. Let the fun begin! At 7:30 a.m., the Pitocin started to drip. Drip by drip I was prepared; I’ve been here before, I may feel good now but it can change in a second. The doctor broke my water and the fun began. The hours went by and I wasn’t feeling much until BAM! Hello contractions! Let’s start dilating! By noon I was completely miserable … COMPLETELY MISERABLE! Two epidurals later, I learned that my body does not respond to the medication, which also happened with Evan. I do not have the receptors in my spine that are necessary to numb the abdominal area. Awesome! Not much to do at that point but grin and bear it, and cry and breathe heavily and hyperventilate. (Yes, that happened.) So much for curling my hair — the cold washcloths changed that look real quick. All of this … and yet, I was barely a three. A THREE!

The anesthesiologist did an amazing job keeping me as comfortable as possible and was able to numb me from my bikini line down and give me something to make the pain of the contractions not as strong. Jake asked to run somewhere real quick and the nurse said as long as he’s back within an hour it was no big deal. I was progressing extremely slowly. (Don’t worry, my mom was there; I was not alone!).

Fifteen minutes later the nurse came to check me and gave my mom a look. I saw my mom mouth “bloody show” and heard the nurse calmly and sternly tell her to call Jake to return immediately. I lost it. I was crying hysterically, shaking, scared out of my mind that Jake would miss the birth of his child. I asked the nurse what was going on and she calmly told me I was completely dilated, 100 percent effaced and crowning. CROWNING?!?!?! Just a little bit ago, I was a three and Jake was able to leave! She told me not to push down, not to sneeze, not to do anything. She had me follow her voice and breathing patterns to settle me down. The room was moving so fast and carts were coming in, different nurses were rushing the room; then like out of a Hollywood story, my husband came running in and the doctor was running on his tail.

Three pushes, one contraction and three minutes later, our princess was on my chest. There is nothing that can replace the immediate skin-to-skin moment. Nothing compares, nothing beats it. I stared at her, the most beautiful girl I have ever come across was right there in front of me. Her color was amazing; her cry was crystal clear. She is perfect.

Jake is one of four boys and my entire pregnancy he told me he wasn’t sure what he would do with a girl, but he figured it out pretty quick. He was head over heels in love. Evan is smitten with her, too. He sings to her when she cries; she’s his first kiss in the morning and last kiss before bed. He’s always concerned about her whereabouts and tells her she’s his little girl. The two of them melt me. I am exhausted and overwhelmed, but I know this time will pass quickly. Going from one to two was a big change, but life could not be any sweeter.

Any of you ever had a husband nearly miss the birth? —Jennifer

Add a comment Cancel reply
2 Comments
Just for You
Working out at home
Get free strength, cardio, yoga, and meditation videos.
Try them
STAY IN THE KNOW
When new stuff happens, you'll be the first to know!
About Us
Jenn and Kristen are passionate about letting women know they're more than a number on the scale.
Get the deets
Instagram
X