As a plant-based endurance athlete, it’s always awesome to find a new sports fueling product that meshes with my nutrition philosophy. It’s even more awesome to discover a mainstream product jumps on board the vegan train.
Though there are dozens of options for endurance athletes desiring squishy food in foil packages, GU is the one most likely to be stocked at aid stations. Because of this, I stocked up on GU in my early years as an endurance athlete, training my gut to tolerate what would be served on the course.
And then I found out GU wasn’t vegan. Not a dealbreaker for this vegetarian — I’ve eaten products containing honey, for example — but the information was still worthy of further research. There wasn’t a ton of info online about GU’s qualification as a plant-based product, and some debated whether the vegan info was fact or fiction (the ingredient list doesn’t have any ingredients known to be animal-derived). Wanting to get some facts, I went straight to the source and e-mailed the GU crew. They confirmed their product was, in fact, not vegan. One of the amino acids utilized in the formula was derived from bird feathers.
You guys, I don’t think there’s enough gut training to allow me to stomach that information.
That said, I gave my GU stash away and found other products. Instead of taking gels on the course at marathons and triathlons, I carried my own gels in jersey pockets and fanny packs, like a sweaty pack mule. It wasn’t ideal, but still better than the image of bird feathers tickling my throat every time I swallowed.
Recently, though, I got an e-mail from my contacts at GU, announcing the removal of all animal products from their nutrition line. For the first time in 20 years, the base formula of their gels has been tweaked to remove amino acids derived from animals. This is in part a performance decision — the amino acids in question were actually found to inhibit, not help, training adaptations — and part an ethical choice. Bird feathers, they decided, were just plain silly. 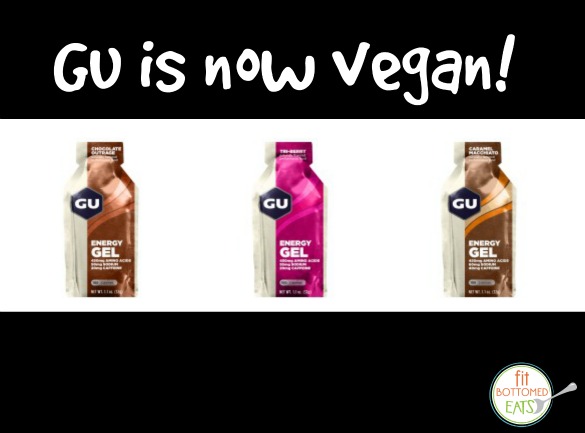 The new formulation is completely vegan and totally tasty. Though it had been a few years since I last had a GU, I couldn’t tell any difference between the old GUs and the new. That’s definitely good news, especially since I find their chocolate outrage flavor to be one of the most delicious things to grace my lips during a long bike ride.
The even better news is that we No Meat Athletes don’t have to carry a fanny pack of squishy foods in foil packages anymore. I don’t know about you, but this pack mule is retiring. I’m getting my nutrition from the race-course buffet.
Mad props to GU for creating a vegan-friendly product! Will you try their new formula? —Susan
New Fitness
New Mamas
New Eats
New Zen
STAY IN THE KNOW
When new stuff happens, you'll be the first to know!