When I headed to Seattle for the Brooks Running blog ambassador trip, I didn’t go in with my typical race plan. You see, my typical race plan includes paces and goals, and my plan for the Rock ‘n’ Roll Seattle Half Marathon? All I wanted was to cross the finish line with a smile on my face.

Earlier this year, I had every intention of rocking the race — after all, I do tend to run my best out West. Then we sold our house, but still I had a training plan that seemed totally manageable, even though I knew I’d be in the process of moving to a new home in a new city right at the point when I would want to be putting in some big miles. 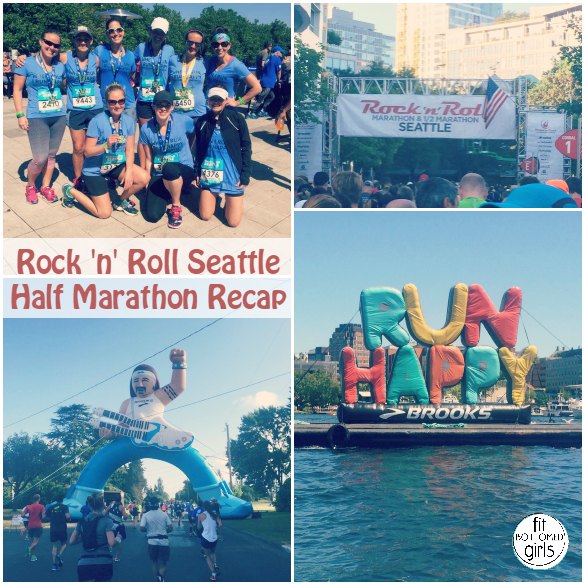 As you’ve probably guessed (especially if you’ve moved recently enough for the memory to be fresh), the training didn’t exactly go as planned. I had a couple of days where I reached 8 or 9 miles total (split up between two or three separate runs), but I’d done no speedwork, no crosstraining and no actual long runs. So, when I arrived in Seattle, I was all set to just coast through the race, see the sights and keep smiling. No time or pace goal to be seen.

Then I started listening to some of the other bloggers talk about their goals, training, races, paces — they were seriously inspiring — and I started having second thoughts.

Not about being able to complete the race, mind you, or about whether I belonged there. No, I had second thoughts about taking it easy.

This voice in my head started telling me that I was better prepared than I thought. That although I hadn’t run big distance in one fell swoop, I’d been running multiple times each week (and feeling strong). That I was in pretty darn good shape, and, seriously, what’s the harm in trying? It’s not like I’ve never experienced a miserable half marathon before. Even if I went out a little too hard and suffered on the back half, I would still finish. And hey, I’d have a story! 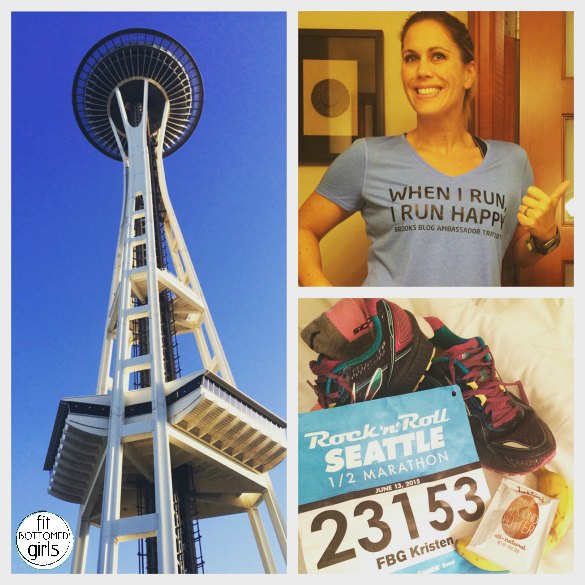 The morning of the race was clear and cool (especially to a Floridian who’s gotten most of her run in around 6 or 7 in the evening), which is fabulous running weather. I lost my group shortly after getting to the race site, so I went right to my assigned corral, right in the middle of the pack based on my estimated finish, which I’d put down as 2:25.

Note: Apparently, lots of people don’t put down their real projected finish time. People often put down much faster finish times than they’re actually planning, so, when you put down a time that would have you running, say, an 11-minute-a-mile pace, you’ll be surrounded by lots of people who … start out at a brisk walk. And if you end up running a bit faster than that, it’s doubly obvious.

Because of my corral position, I started about half an hour after the rest of the Brooks bloggers, but within a few minutes, the crowd had spread out around me and I found my groove. It felt good. Really good. Especially because much of the first couple of miles slopes downhill, and since I’m a huge fan of free speed on the race course, I took advantage, which meant that around the time I hit the 5k mark, I was … scarily close to my 5k pace. I consciously slowed it down a bit, but only because I wanted to be smart, not because I needed to. Besides, I always gain lots of speed on downhills. And I always lose a lot of it going back up. I’d seen the elevation profile for the course. I knew those uphills were coming.

There was music every couple of miles (if not more frequently), so while I had an awesome playlist (and most appropriate, I’d say), I spent a lot of time with my earbuds out, just soaking up the sounds and songs on the course. And the sights were pretty great, too!

Shortly after the 10k mark (at which point my pace was still much faster than anticipated, but I felt great!), we came upon Lake Washington. It was gorgeous, and I was delighted to see the big Run Happy barge out on the water. It wasn’t long before I hit my biggest challenge, though — I got completely choked up and had trouble regulating my breathing at the sight of the military memorial, which was set up for a mile or two along the shore. There must have been hundreds of people holding flags, with pictures of fallen soldiers set up every couple feet. My throat got tight, my eyes got watery — it was really powerful. And then it hit me — the people this memorial honored were probably being honored at this event because it was the type of challenge they believed in, and the best respect I could show them was to push myself and stop being a weepy sissy.

A mile or so later, as I crossed the 15k mark, I realized that not only was I on target to hit a personal record for the half, but, unless something went very badly, I’d beat my previous record by a few minutes. Since I’d already climbed the biggest hill out there without much trouble, I finally allowed my confidence to soar and decided to see what I had over the next four miles. 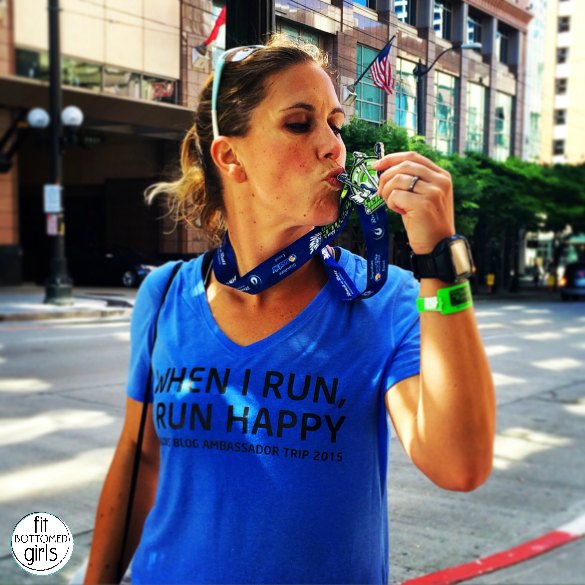 Sweaty, tired, but oh so happy.

There were one or two short walk breaks — not surprising, since my initial plan had been to stick to a run 3-minute, walk 1-minute schedule for most of the race and I’d ended up skipping most of them because I refused to walk on a downhill (or past a band playing good music, or in the sun, or if I was feeling really strong … ), but I didn’t lose any overall speed. And when I hit the final uphill toward the finish (and yes, it does finish on a climb), I found myself nearly breaking into a sprint as I flew toward the finish line. I was happy to be done, of course — running for two hours and 16 minutes is plenty! — but I was shocked by how much energy I still had left. That’s never been the case for that distance.

My final time — 2:16:39 — was close to four minutes faster than my previous PR, and while nobody was more surprised than I was, the whole Brooks crew (all of whom had finished long before, partly because they were in a corral that left 30 minutes before mine, but also? They’re faaaast) was excited to hear the news. It’s funny — the race would’ve been an awesome experience regardless, but getting to share the news with a bunch of new friends really took it up a notch.

Have you ever gone into a race with every intention of running strictly for fun, but ended up pushing for a new record? It’s really a neat feeling … and it has me inspired to sign up for another half. Maybe this winter? Who knows of a good one? —Kristen