Did you know that August is Breastfeeding Month? Oh, it is, and I’m squeaking in to mention it on the very last day. Hashtag momontheball. My third baby is coming up on her first birthday (hashtag itgoessofast hashtag I’mdonewiththehashtags), which means she’s my third bambino to hit a year of breastfeeding. I’ve spent three years of the last five years breastfeeding. I don’t even know how that’s possible because that’s a lot of time breastfeeding and it doesn’t feel like it. I guess because as opposed to the beginning when you notice every excruciating minute of that nipple pain (because no matter how perfect the latch is, it hurts those first couple of weeks!), once you and the baby get into a groove, not as much of your day is taken up by breastfeeding any more. And while I’m slightly sad to think about my breastfeeding days being over, it’ll be kind of nice to be able to take a medication without wondering if it’s safe while breastfeeding. And I’ll be so glad to retire my nursing bras that I might throw them in the fire.

As I’ve been reminiscing about all of the boob feeding, it’s made me think of how much the baby changes from that first latch to their first birthday. They get good at a task they’ve been working on for a year, and they also turn into little comedians. Here are just a few of the stages you’ll see in that first year. 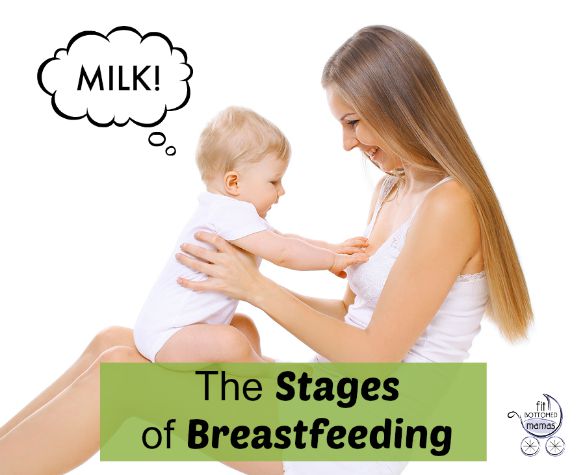 The Torturer: Your new baby with its voracious appetite will manage to make you cry and bleed, not necessarily in that order. You will wonder how such a little mouth can do so much damage. You will count and breathe and curse for that first minute of latch-on pain until it goes away after that first week or two. Then you will thank the breastfeeding gods that it doesn’t always have to be torture.

The Insatiable: Your baby wants milk, and he wants it all the time. You will no sooner finish a feed than he wants more milk. You will wonder if you’re even providing any milk, but the dirty diapers will prove that there is something getting in that tummy. Eventually, the insatiable newborn will not want the boob 24/7 but for awhile, you will feel like your sole purpose is as a milk provider.

The “Oh, It’s YOU!”: There is a moment when the baby looks up at you while nursing when she realizes that oh! there is a human face attached to this warm milk-providing contraption. This will elicit a smile that will cause a mouthful of milk to dribble everywhere and will melt your heart.

The “Oh, It’s You, Let Me Claw You”: Once the baby is familiar with the fact that a face and boob are a package deal, those little arms are long enough to say hello to every inch of your face. This means baby fingers will go in your mouth, up your nose, and gouge your eyes. You can’t really be mad.

The FOMO (Fear of Missing Out) Baby: At some point, your baby starts noticing more of the world around her. Every noise must be investigated, and when this is done while nursing, you’ve got a baby who will latch on and off so many times it’s a wonder she doesn’t get dizzy. If you’ve got older kids this stage is annoying and you’ll retreat to a quiet room to get a feed in. This is when you start to be scared of nursing in public because you never know when the baby will just up and leave you exposed to the world to check out a bird chirping.

The Slammer: Similar to the FOMO stage, the Slammer occurs when baby is interacting with the world around him but still very much wants to nurse. This happens because by now a baby is so good at latching that they can do it at full speed while slamming into your boob, again and again and again.

The Test Biter: This stage strikes fear in the heart of every nursing mother; it comes out of nowhere and there’s little you can do to prevent it the first time. All three of my babies eventually bit me; with teeth, without teeth — it doesn’t really matter. It is painful however you slice it. Luckily with my kids, this stage was very short, but watch out toward the end of a feed when baby is done and getting bored. That first bite is typically just testing out a new skill and hopefully they’ll get bored of it quickly.

The Acrobat: At some point, your baby grows so proud of his/her physical abilities that he/she will want to try them out while nursing. They want to prove that they can play and kick and sit up straight while nursing. You draw the line at headstands.

What was your favorite breastfeeding stage? They’re easiest before the fear of missing out starts, but it’s fun when those little personalities start to show, too. —Erin