What’s cuter than your baby’s grin when that first tooth pokes through? Almost nothing. What’s worse than a grumpy baby who can’t sleep and is uncomfortable during waking hours? Almost nothing.

My daughter was late to get any teeth, with her first appearing after 11 months. But now she’s making up for lost time, having cut both of her bottom teeth and both of her top teeth, with several more just below the surface. Needless to say, we’ve been in a constant state of teething for awhile, with the drool, sleep disturbances and sore gums to show for it. Most parents are willing to try anything to ease the teething pain, and the Fit Bottomed Mamas team is no different. Here are just a few of the solutions we’ve tried and loved! 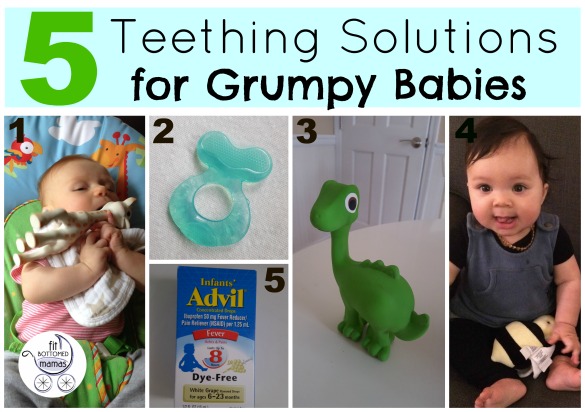 1. Sophie the Giraffe. There’s a reason why every mother and their mother has a Sophie giraffe: babies LOVE THEM. Before I had kids I thought Sophie was just a cute toy, but it’s pretty much teething magic. This was one of the first toys Gwen ever really held and played with, and in those first few months, it went with her everywhere. Sophie is the perfect size for babies to grasp, and her tall neck makes it easy for them to hold and chew at the same time. Pretty genius; not to mention it’s free of phthalates and BPA. Cute, too. —Jenn

2. Nuby Teethe-eez Soft Silicone Teether with Bristles. When I was walking through the store, I saw this teether and thought, “Yes, that would feel good on sore gums” and bought it immediately. This teether is made of silicone so it’s soft and flexible, but has enough firmness to bite. I like to imagine the bristles bring a magic, massaging touch to babies’ gums. I think it works because my daughter loves it. Plus, it’s only $5 and comes with a case for when you’re on the go.

3. Nuk’s Soothasaurus. I somehow managed to get through having THREE kids without a Sophie. But I recently got the next best thing from NUK: a Soothasaurus. Besides having a super cute name, it’s a super cute dinosaur that comes in red and green, and it comes in at a more affordable price than Sophie at less than $10. It helps with babies’ sensory development, makes a fun squeak when squeezed and is a squishy softness that is perfect for nibbling. The natural rubber is BPA-free, too. Be warned: Big kids like to steal this one.

4. Amber teething necklaces. I’ve never tried one of these, but Tish swears by it. In her words: I swear once you start down the path of hippiness, there’s no turning back. The minute I signed up for birthing classes at a more holistic birthing center I was a homeopathic goner. My friends weren’t surprised when Zoey started sporting an amber teething necklace at 4 months old. It’s definitely a sensitive subject. People approach me a lot and offer unsolicited opinions on the safety and effectiveness of the pieces, but I did my research and spoke to moms who swore by them so I thought I’d try. I notice immediately when she’s not wearing it. She goes from zero drool to California’s drought savior in a matter of hours. They say amber is a natural pain reliever; it contains succinic acid which is anti-inflammatory. Zoey still chomps and bites things so I’m not sure it’s 100 percent effective, but it’s definitely helping with something happening in her mouth and that’s enough for me.

5. Children’s Advil. With babies, I try every solution before resorting to medicine, but sometimes you’ve just gotta whip out the Children’s Advil. I always have it on hand for fevers because there is nothing worse than a midnight pharmacy run when you need to bring a fever down, so when all of the other things fail and I can tell the baby is just sore, I pull out the Children’s Advil. It can be used for babies 6 months and up for about 8 hours of relief from teething pain. (The Infants’ Advil® product and information have been provided by Pfizer Consumer Healthcare.)

Some kids are terrible teethers, some you don’t even know are getting teeth. Which end of the spectrum were your kids on? My kids were usually fairly calm teethers, but it seems like they’ve each had several teeth that really gave them overnight fits. —Erin