I mean, we had so many questions! How do you finger knit and run at the same time without falling? Heck, how do you even finger knit just sitting there? And how did this all come about?!

Meredith answered our burning questions in this video that was created by We Are Knitters and Anthony Gentles / Yothann Productions and in a quick Q&A!

How did you come up with the idea of running and knitting — and why do you enjoy it?

When I was an intern at We Are Knitters, a startup in Madrid, Spain, that sells knitting kits and supplies, we were brainstorming fun, outside-the-box ideas. We saw on social media that someone had run a marathon while finger knitting, and so I joked that I would do it, too. The next day, I brought a ball of the wool with me on a run to try it out, and found that it was actually very calming! It really helps me take my mind off the long distances I am running, and lets me really let loose during my run. After I got accustomed to bringing the yarn with me on runs, I realized that it helps me set a steady pace as well! This is really important for long distances, since it is easy to start out too fast, but with the knitting I can regulate my running pace because of the repetitive motion.

How exactly do you do it?

It is actually pretty simple! First, you start with a slip knot on your pointer finger, and then you loop the yarn around each consecutive finger, leaving out the thumb. After you get to the pinky finger, you wrap the yarn around the opposite direction on each finger so that you have two loops on each of your four fingers. Then, starting with the pointer finger, you slip off the second loop on each finger. Add a new loop of yarn around each finger and continue slipping off the second loop until you have reached the desired length! (Watch the video above or here to see it live!) 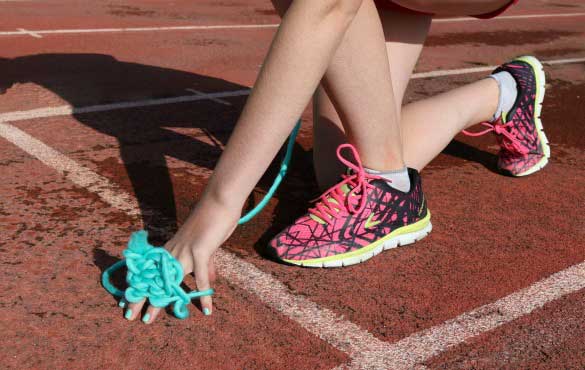 What have you knitted so far?

It is hard to get too complex when I am running, so I am a bit limited in what I can knit! I have been making scarves on my runs, and they can range from a few feet long to over 12 feet long! Maybe the next step is to try and knit a sweater when I am running, after all winter is just around the corner!

We can barely chew gum and walk at the same time, so how do you do this without falling down?!

It definitely takes some practice! First, I tried walking with the yarn just around my apartment and around the block before I took it with me on a run. I wear the yarn like a bracelet so I don’t have to worry about dropping it when I run, since the first couple times it slipped out from under my arm and rolled down the sidewalk! Next, it is important to find a balance between paying attention to what is in front of you and what you are knitting, but after a few miles it becomes natural and you find a rhythm in the running and knitting. 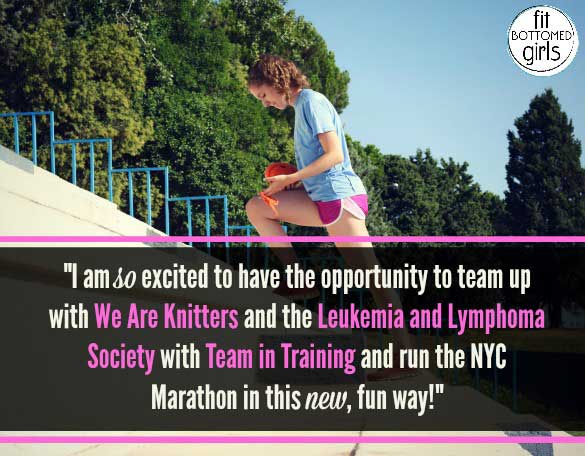 Any other advice? Thoughts?

I am so excited to have the opportunity to team up with We Are Knitters and the Leukemia and Lymphoma Society with Team in Training and run the NYC Marathon in this new, fun way! I never thought I would be combining two of my interests, running and knitting, but I am ready to take on the race!

We’ll be cheering you on the whole time Meredith! —Jenn