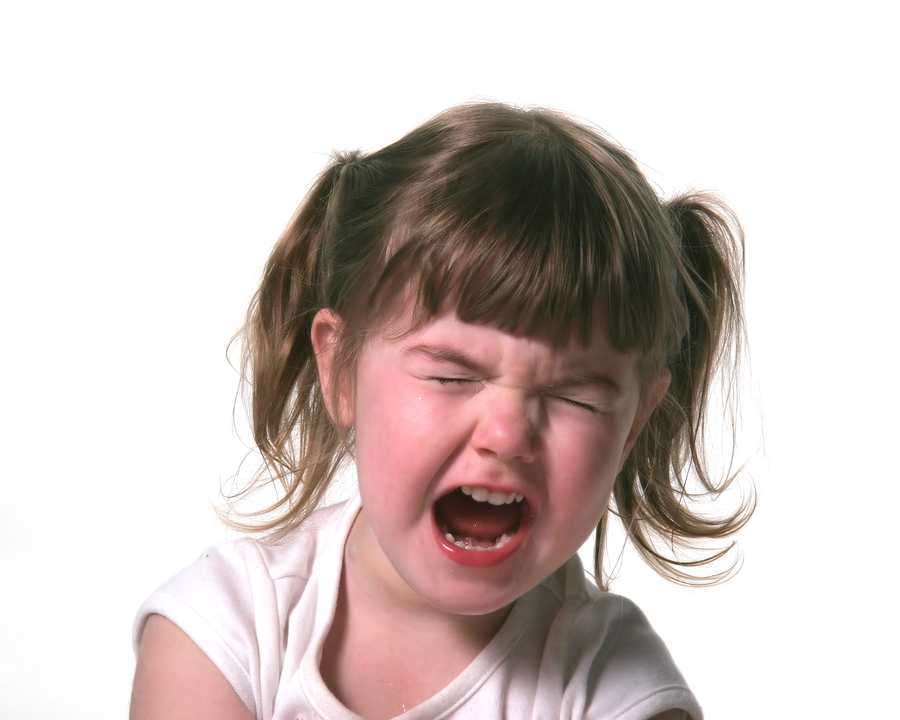 Every now and then in my pre-kids life, I’d see kids throwing a tantrum in public and think, “What a brat. My child will never act like that.” And then you have a child and through excellent timing and tantrum management, you keep the tantrums confined to home. And they’re relatively few and far between and manageable.

And then you have a second child and boy, the tantrums are different. You don’t remember the first being quite this explosive. And then through a series of unfortunate events, you aren’t as able to be in control of the tantrum in a very public space. Then … then you suddenly have that child who is acting like that.

The other day we had to pick up my oldest from school. It was a day when the baby was refusing her nap and I was frustrated enough that I decided to leave the house early just to drive so that both she and my son would sleep in the car. (He refuses a nap although he very much needs one. Hang tight! You’ll see!) They both conked out after a few minutes, so I parked in the school lot and listened to the pitter-patter of rain, what would be the last moment of peace I’d get for the next 15 minutes. I had to wake up both of them when pickup time came.

The baby woke up happy. Owen? Not at all. He wanted to be carried, and thinking it would be quicker than getting the stroller, I decided to just carry the baby in. Owen began screaming “MOMMY CARRY” as we walked through the parking lot up to the building. He continued screaming MOMMY CARRY as we entered the building. Screamed MOMMY CARRY as we walked down a very long hall. Threw himself on the floor refusing to walk — three times. He got the crazed look in his eye that said to me no matter what I did it wouldn’t help, so I refused to carry him — not that I could have anyway because of the baby. He screamed as we got to the classroom door, screamed as I signed my daughter out and continued screaming as we made the long trek back to the car.

We got a reaction from every single person we walked by. I don’t blame them; it’s kind of hard not to stare at a screaming 3-year-old. But it was beyond mortifying for me. Every parent we walked by commented, most in total support. “Been there!” “The threes are the worst!” The teacher: “Don’t even worry about it.” There was one woman who I’m pretty sure was making rude comments to me, but by the grace of a language barrier and ALL OF THE SCREAMING, I couldn’t hear so therefore didn’t have to punch her.

I tried to get him in the car but physically couldn’t in his crazed state — I tried three times. I had to wait it out. He stood in the parking lot, screaming.

A mom I knew saw my struggles and drove out to see if I needed a hand, needed a break. There was nothing she could do, but I was touched by her offer. It was only once he’d calmed down, once I’d gotten him in his car seat, driven off and gotten halfway home that I let myself cry — the sense of failure and fatigue were acute. It wrecked me.

There is a whole series of reasons and excuses I can make for the 10-minute tantrum. He had just woken up. He was hungry — because he’d left half his lunch on his plate at lunchtime. He was jealous — I was carrying his little sister but not him. He flat out didn’t want to walk. He’s three. And yeah, he also flat-out has much more frequent and emotional outbursts than his big sister did. I’ve done everything the same, but by virtue of being the second child, he’s a different child than my first and I’m a different parent to him.

Another day, Owen and the girls sat so nicely at lunch when we were out to eat that the table of women next to us kept looking back at us. After being caught staring for the third time, one of them said, “I’m sorry for staring but your kids are SO WELL BEHAVED. We’re teachers and we are so impressed!” I told her we just got lucky.

As parents, we do our fair share of eating our words. When you’re faced with the reality of parenting, the things you’d “never do” become things you do. The way your kid will never act becomes the way he or she might act every now and then. Parents who have kids who would have never acted like that might be right. They might have a kiddo or series of kiddos who had calm temperaments. They might not have had a kiddo in that situation at that very time who reacted that way. They might have just plain lucked out.

When I was on vacation, my 5-year-old came down with a terrible fever when we were out sightseeing. We let her sit in the back of the double stroller to rest. I vowed never to judge a parent whose kiddo seems “too big” for the stroller. You just never know the situation. Now that I’ve been involved in the most epic tantrum in public ever, I vow to never judge a parent struggling with a tantrum. You just never know the situation.

When a parent is in that situation in public, they might laugh. You might think they’re ignoring their kid and letting them be a brat. But more likely, they’re mortified. They’re likely trying their damnedest to get out of the situation as quickly as possible. They’ve likely tried different techniques, read parenting books, waited patiently for their kiddo to grow out of it. Give them the benefit of the doubt. They’re likely not a terrible parent. The kiddo is likely a really sweet child. They just had a really, really unlucky day.