Despite having lived in Michigan for the first 20 years of my life and spending parts of nearly every summer north of the Canadian border, I had never wandered beyond Ontario. Over the last few years, however, I’ve been hearing more and more about what an incredible food and culture scene Quebec — and Montreal specifically — offered, so when the Federation of Quebec Maple Syrup Producers reached out and asked if I’d be interested in spending a few days with them* in Quebec City and Montreal during the Grands Prix Cyclistes races (which I already covered a bit at FBG), well, saying yes was a no brainer.
And that was even before I laid eyes on the culinary delights they had in store for us. 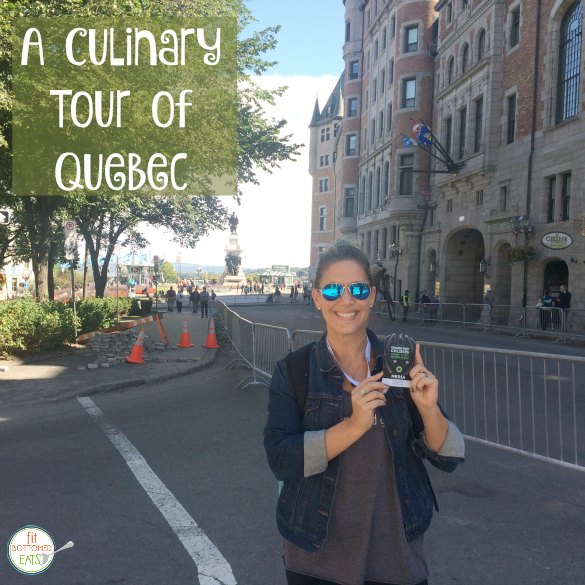 Every dinner took place at restaurants with chefs who were certified Maple Masters — a big deal, since there are just 100 in the world — which means that every meal featured maple used in surprising and seriously delicious ways. (I’m going to apologize in advance for the lack of awesome pictures — with fancy restaurants comes dim lighting, and I didn’t get as many appetizing shots as I’d hoped. So you’ll just have to trust me!)
Our first meal was at Panache, where we got to interview Chef Louis Pacquelin prior to dining. He wasn’t just passionate about using maple (although he said he never uses regular sugar anymore — the pastry chef might, but he is a pure maple purist); he was also a huge advocate of creating as little waste as possible. “I’m very careful because, in a hotel like this, there is so much food waste. So, when I cook mushrooms, for example, I’ll take the parts that are a little less appetizing and put them in the caramel sauce [that comes with the dish], so you get a little extra taste, and I waste as little food as possible,” he said. Plus they source pretty much all their ingredients from Panache’s own local garden! 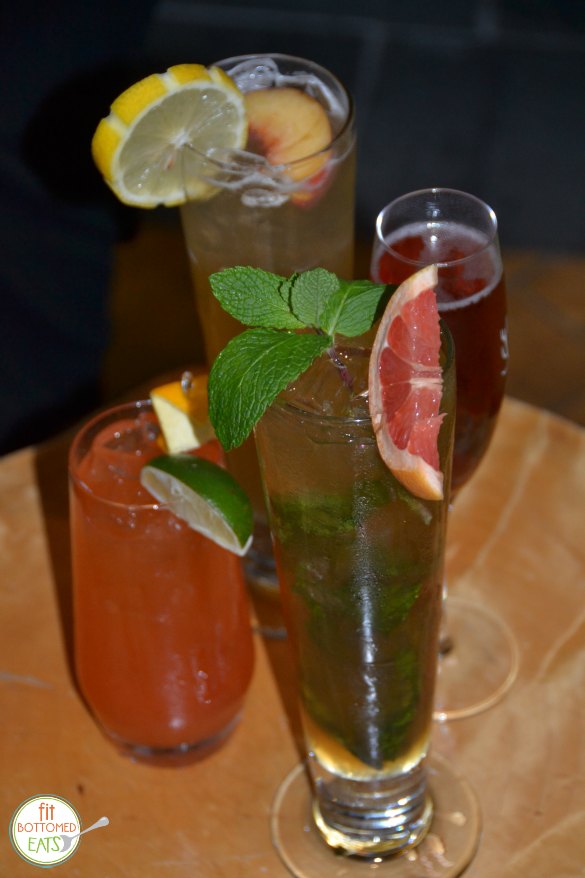 After sampling a few maple cocktails, it was time for dinner. Chef accommodated several dietary restrictions (pescatarian for me, and we also had someone who was gluten-free and someone who was vegan — quite the challenge!), and did so beautifully. I had a mushroom consomme with seared mushrooms and maple syrup, radishes served three amazing ways, and a halibut filet (that I think I dreamed about that night) with vegetarian foie gras. We also sipped on some maple wine — it was a big hit with many in the group, but a bit sweet for me. If you find yourself in the area, I’d recommend trying it before buying it, because if you like it, it’s kind of a perfect souvenir. 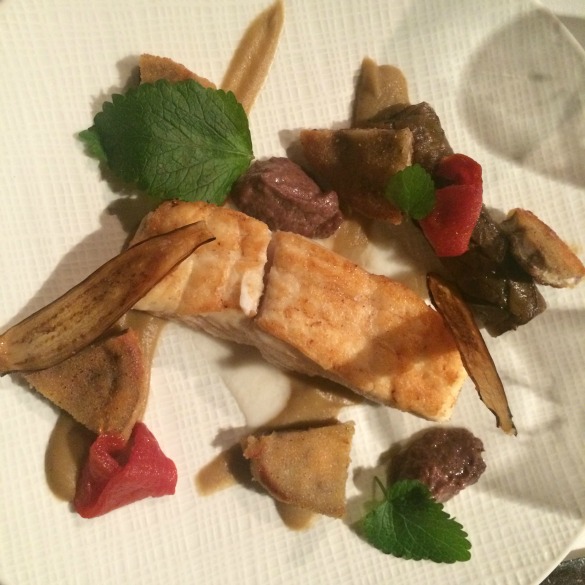 Figured I’d share a picture … just for the halibut. Hahaha.

The following day was filled with cycling and walking all around Quebec City — truly a gorgeous location that I’d go back to any time — but between watching the race, chatting with cyclist Hugo Houle (and yep, he fuels with maple — I’ll have recipes to share shortly!), and hitting the road for three hours to get to Montreal, we dined at Chez Boulay, which seemed to be a favorite meal for a few people on the trip: organic vegetables with maple syrup and peppery green alder vinaigrette and a salmon filet with maple and boreal spice glaze. Oh, and a really nice maple cocktail that I would certainly order again! (And maybe again …)
We spent the following day learning all about the benefits of maple, specifically for athletes (yes, really!), but it actually has some pretty sweet (see what I did there?) properties for other folks as well — it has 63 antioxidants, and real amounts of maganese, riboflavin {B2}, zinc, magnesium, calcium and potassium. Then, we got to sample some syrup. And sample some maple products. And sample some more. There were multiple types of cookies, four types of syrup (they’re awarded distinctive grades based on how light or dark they are, which has to do with when in the season it’s harvested), maple popcorn, maple butter, maple vinegar pearls (so interesting in the best possible way!) … I know I’m leaving things out, but it was a pretty fascinating look at the different ways this one regional product can be used. I can honestly say I had no idea. 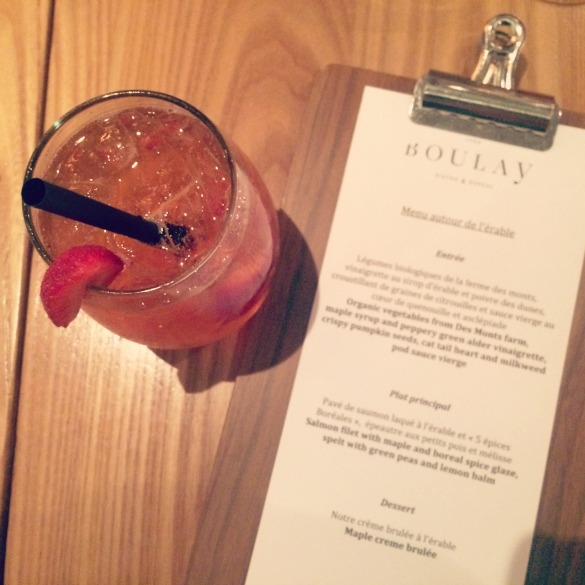 Our final dinner was a big one where we journalists (or, as my media badge said in French, journalistes) were joined by members of and partners with the Federation, as well as the day’s big winner, cyclist Rémi Pelletier-Roy. He just happens to be the top endurance track cyclist in Canada, and you guys? Cycling wasn’t even his first sport. He was an alpine skier. He just (just) wants to compete in the 2016 Olympics, then he’ll get back to focusing on — get this — medical school. Let’s all cheer him on in Rio, okay?
Anyway, dinner! We all but took over Renoir, and I know this is the biggest food blogger fail ever, but I took no pictures of the menu or the food — I was too busy chatting with the group around me. I’m sorry. It was delicious and I know I enjoyed it enormously, but that’s as much as I have for you. I’m sorry. 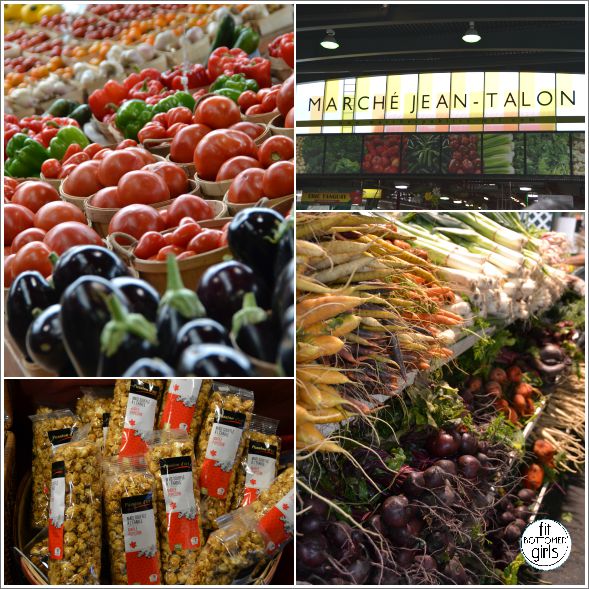 Our foodie adventures extended beyond the restaurants and maple tasting, too. We walked around the Marche Jean-Talon, which I’m going to say is an absolute must-do should you find yourself in Montreal, and we had delicious box lunches every day that put the typical American box lunch to shame. I had fresh, flavorful salads, quinoa, and sandwiches of baguette, brie and roasted veggies. No chips or fruit salad soaked in sugar. And, of course, we also made a point to hit a couple of local bars — you know, to soak up the local culture — and it was at this point that I learned that, in other countries, Hoegaarden is served in a Very Large Glass. You’re welcome for that knowledge.
*This was a press trip, so my travel, accommodations, food, etc. were covered, but I’m under no obligation to write anything nice. I just had an amazing time and ate really, really well, so of course I wanted to share that with you!
What’s your favorite city for culinary adventure? I’m finding that I’m creating a pretty lengthy list of places I neeeed to go. —Kristen
New Fitness
New Mamas
New Eats
New Zen
STAY IN THE KNOW
When new stuff happens, you'll be the first to know!
Just for You
Drop the diet for good
A variety of anti-diet coaching programs just for you.
Get free access
STAY IN THE KNOW
When new stuff happens, you'll be the first to know!
About Us
Jenn and Kristen are passionate about letting women know they're more than a number on the scale.
Get the deets
Instagram
X