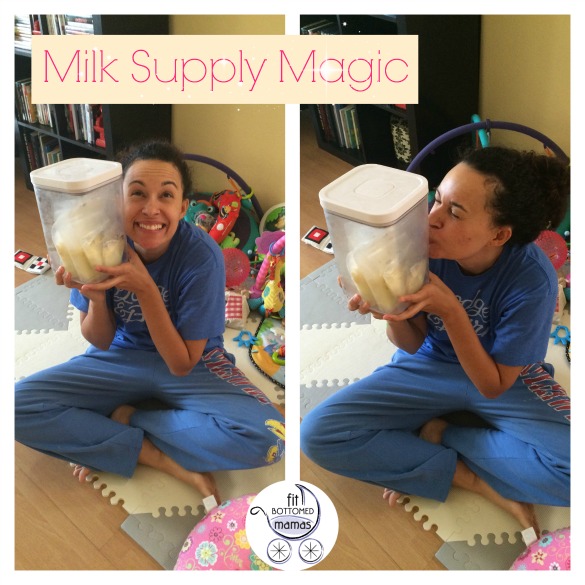 If you’re a breastfeeding mama who pumps and has also stressed about the amount of milk you’re providing for your wee one(s), then this post will be a welcomed hail Mary. I can’t tell you how many nights I Googled “how to increase milk supply.” There’s so much pressure as a working mom to make sure my kid has enough ounces to make it through the day. I’ve drank the teas, swallowed the pills and tried two different lactation cookies, but I was barely making the minimum and I was stressing — which we know is oh-so-helpful for your supply.

Luckily, I caught a blurb Tamara Mowry posted on Instagram about being a working mother and how she pumps. She recently had her second child and posted a pic of a bar next to a full bottle of pumped milk. If you want to get a milk-obsessed mom to pay attention to a post, throw up a pic of a mountain of milk. My mouth fell open. I immediately clicked on the lactation bar’s page and ordered the bars without hesitation.

I’ll cut to the chase: Mrs. Patel’s products work. I placed my order and a week or so later I received the bars in the mail. I froze them for 30 minutes like the company suggested and the next morning I ate my first bar. It’s one bar per day. Easy, right? They taste pretty damn good too so adding them to your morning routine won’t be a chore by any means.

The results? I pumped nine ounces my first pump session. (It’s a good time to note that before I was getting three ounces in a 30-minute sitting.) I seriously almost cried. The next two days I pumped the same awesome amounts. My first pumps provided a ton of milk. The second session I’d get five or six. Then I got sick … And my supply dropped quicker than a new Adele track, but I kept eating the bars and drinking fluids like a mad woman. It took longer than I’d care to admit to get better, but once I kicked the cold, my supply went back up.

I was skeptical that maybe the large pumps had been a fluke, but this week I’ve noticed crazy amounts again. Usually my supply is teeny tiny come night time, but I pumped nine ounces at 8:30 p.m.! I don’t know about you, but I used to be lucky to get two ounces after 6 p.m.

Why they work is a complete mystery. I know they contain fenugreek, but fenugreek alone has never really worked for me. Whatever spices they throw into the mix that promotes Ayurveda (an ancient medicinal system) works. I’m a fan for life. I plan to give these bars to new mamas who plan to nurse.

I know what you’re thinking … “Well, you’re just one review, honey.” Which is why I told a couple of mom friends to try.

I have one bud who has always struggled to produce enough milk for her baby. I recommended she order them. I could tell she was disheartened by all of the other attempts she tried, but she agreed to give it a go. She texted three weeks after finishing her first box of bars to tell me the good news. Unlike me, she breastfeeds exclusively so you’d think it would be harder to gauge if her supply went up, but she said her little one nurses for longer periods of time and for the first time since she was born is plumping up. (The plump test is THE best proof that the dang things work!) I have two other moms who are waiting for their shipments, but I’m pretty confident they’ll work. I’m looking forward to hearing from them.

Breastfeeding has so many awesome benefits, but it can be so unbelievably hard for so many reasons. I’m a firm believer that we moms need to stick together, so when I try a product and it makes my life easier I feel compelled to share the wealth.

Full disclosure: This company didn’t pay me to gush about its bars. They have no idea who I am, but I swear if I saw Mrs. Patel in the street I’d give her a big fat kiss. If you too have found pumping and/or nursing to be challenging this may be just the miracle milk maker for you. Try the products and let me know how they worked for you. We’re in it to win it, mamas!

Do you have any products or tricks you swear by for increasing your milk supply? —Tish

Add a comment Cancel reply
49 Comments
Just for You
Drop the diet for good
A variety of anti-diet coaching programs just for you.
Get free access
STAY IN THE KNOW
When new stuff happens, you'll be the first to know!
About Us
Jenn and Kristen are passionate about letting women know they're more than a number on the scale.
Get the deets
Instagram
X