Bust out your shiny cargo pants, tattoo chokers and super chunky highlights, because the early 2000s are back, y’all!

Everybody ready to dive into the latest workout song battle? We know we are — we’ve been itching to see which tunes released between 2000 and 2010 make you want to work up a sweat, and we’re kicking off our March Madness-style tournament today with the first 8 match ups! (That’s 16 rocking jams, for those of you who struggle with the maths.) 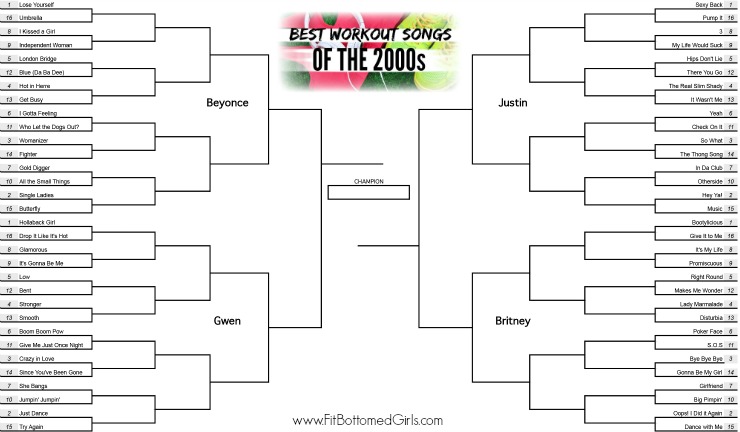 How did we seed the songs, you ask? Well, a couple of weeks ago, we asked readers to let us know which songs they thought should be included, and then we seeded the songs by the number of votes they received, then placed them in a bracket named for a major singer of the decade (Beyonce, Britney, Gwen and Justin). If the initial voting was any indication, we have a feeling we know which song will go all the way … but we’re not not about to tell you what it is!

Voting for the songs in the Beyonce bracket below will remain open for a couple of weeks, but we’ll start going more quickly as we near the end, so be sure to vote right away (and, you know, tell your music-loving friends to get in on the action, too!). After the fun we had with the 80s and 90s workout songs, we’ve, uh, got a feeling that this bracket is going to be all kinds of crazy fun.

Cast your votes for the songs below, and be sure to click submit at the end so your votes are counted. (And if the poll isn’t working, you can always click here to vote instead.)

Which of these songs was your personal jam during that decade? Were any of these terribly tough choices? I’ll tell you in just a sec — gotta go grab my super flared jeans first. Ooh! And my studded belt! —Kristen