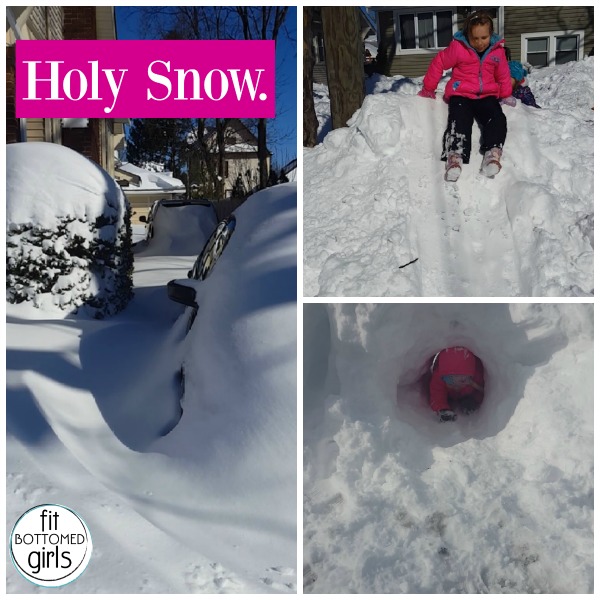 So, I don’t know if you heard, but the East Coast got slammed recently with a blizzard that brought a couple of feet of snow. You heard? A week later, we’re still dealing with the aftereffects. The official total was 28 inches in my town, and I honestly can’t fathom getting the 30+ inches some places got. However, even though I couldn’t make it to the gym because our street wasn’t cleared for a couple of days, I did manage to get in some workouts. You don’t need weights or equipment for these — just two feet of snow and a shovel.

The Walking to the Drugstore Workout

Need some solid cardio? Trudge to the drugstore in blizzard conditions when the snow is up to your knees. My littlest kiddo bonked her head and got stitches the night before the storm, so the day of the storm I had to fill a prescription of antibiotics for her. No big deal, the pharmacy is just two blocks away. HA! When you’re basically high-stepping through knee-deep snow for 10 minutes each way, you are feeling it.  Add in the windy conditions? My thighs were BURNING, and I was wiped out.

I felt hopeless and dejected as I tried to shovel our driveway and walkways. My husband and I took turns and we both concurred that it was never going to be done and we’d never be able to leave our driveway again. We probably did a combined total of four hours of shoveling when good Samaritan neighbors came by with a high school kid and a snow blower — and then wouldn’t accept the money we threw at them. We saved ourselves a solid few hours of shoveling, but we were physically exhausted. It is a testament to my regular workouts that I was able to move the next day.

Ever played in more than two feet of snow? It’s hard to even call it playing because it’s mostly surviving and trying to get around  until you’re too exhausted to carry on. My poor kids were worn out after about 10 minutes from exhaustion just trying to get through the yard. I also built a snow tunnel for them, which wore ME out.

Holler if you got more than two feet of snow last week! Let us know what your snow workouts were. —Erin