Almost exactly four years ago, I ran a half marathon in Miami. My training was on point and I was hella prepared to rock a PR. Instead, this happened — my finish time ended up being 2:31:54 (12 minutes slower than I’d hoped) and I was effing miserable for more than an hour of it. So miserable that I debated whether I ever wanted to attempt the distance again. (Spoiler: I did. A couple of times. Sometimes with other fun stuff added to the mix.)

Just over a week ago, I ran the Sarasota Music Half Marathon with my old college roommates, Corie and Robyn, who had flown in from Seattle and Connecticut. Neither had ever run a half marathon (or much over 10 miles, for that matter), and I was definitely far less prepared than I’d like to be for that distance, but I’d been told that this race was more like a moving party — 20 bands, a Girl Scout cookie stop, and fans cheering all along the course (which wound its way through some of the most beautiful parts of Sarasota). So, we decided we’d give it a try, but with the understanding that we’d stick together until the finish line, walk whenever anybody felt like it, and focus heavily on just having fun. 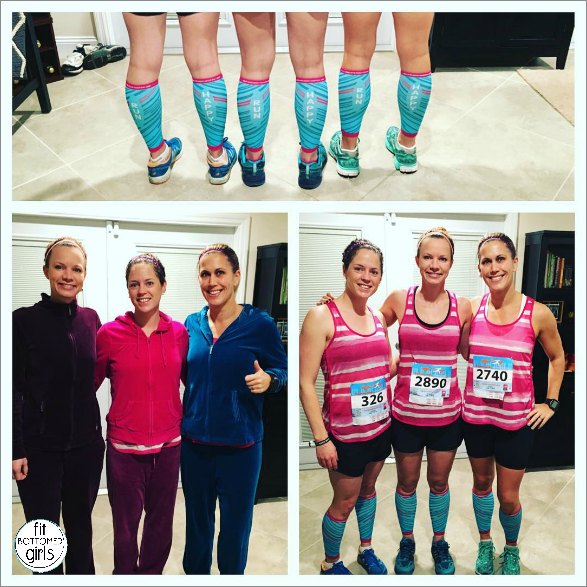 Cute matching outfits (like our awesome Run Happy calf sleeves and pre-run velour track suits from Goodwill) made the whole experience even more fun. Did it help us run faster? I’m not saying no …

We did exactly that — despite really chilly temps and a biting wind, we smiled and laughed almost constantly (to the point where friends who saw us on the course commented afterward, asking what on earth was so funny), stopped to pet a herd of Vizsla puppies (cutest things ever!), ate Thin Mints, took some selfies (safely out of the way of other runners, of course), and even sipped on a beer (which turned out to be really hoppy, much to my chagrin) at Mile 12.5. And our official finish time?

For those who aren’t mathematicians, that’s about 40 seconds faster than my Miami debacle. 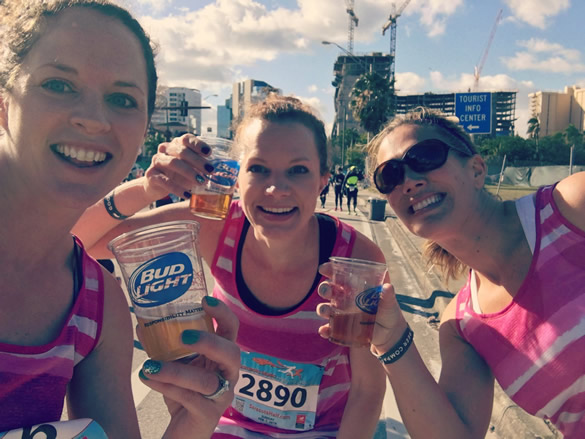 Corie: “You guys! It’s actually good beer!” Me: “You guys! I can’t feel my tongue after drinking this!” You’re either a fan of hops … or you’re really, really not, huh?

And, I should also note that Corie and Robyn somehow managed to finish two seconds ahead of me — sorry to have held you back so much, girls! (Kidding! Sort of.) 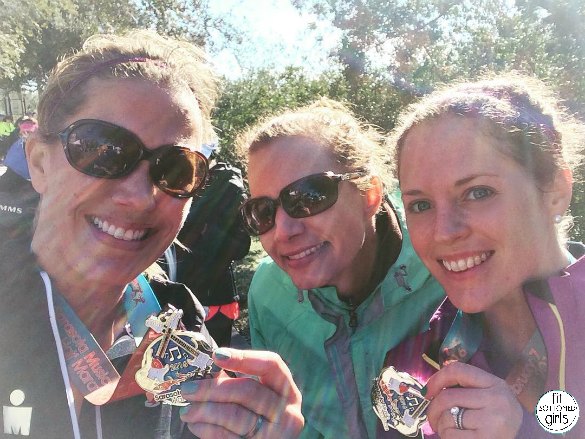 Now, you might see a pattern when it comes to me and the half marathon: When I give zero f*cks, I seem to perform better. After all, I got a PR in Seattle last summer after planning to walk a lot of it! But truly, I don’t think that’s quite the right takeaway.

I’ve had some good luck with my most recent half marathons — pleasant (i.e. not hot!) weather and entertaining courses go a long way toward a solid run. And at this point, I’ve got a good bit of residual fitness built up, so even if my training for a specific race isn’t quite as intense as it could’ve been, I’ve got hours upon hours upon hours of running and cross training to fall back on. In both my body and my mind, I have zero doubt about my ability to finish that distance.

I’m already signed up for a couple more half marathons this year — a first for me, as I’ve never done more than one in a calendar year before — and I’m sure that I’ll actually aim for a PR in one of them. Between now and then, though, I’ll be focusing on how to find that perfect balance — how to set and go for that pace goal while still hanging onto my “give no f*cks” attitude. Seems like that could be the perfect recipe for pushing past those limits I seem to set for myself.

Which camp do you fall in? Do you like to play it loosey goosey and focus on the fun, or do you hit that start line and get down to business? Got any thoughts on how to get the best of both worlds? —Kristen