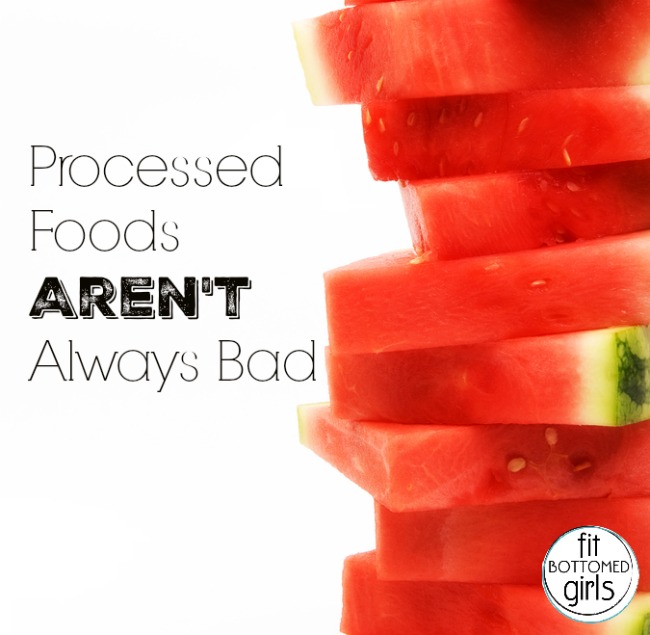 I was reading comments on Facebook the other day on an article about frozen vegetables. I learned a couple of things: 1) I need to stop reading comments on Facebook and 2) I had no idea that people were such purists when it came to their vegetables. In this particular comments section, fights were breaking out about what was in frozen vegetables. One man in particular was adamant that frozen vegetables contained so many added ingredients — and that he would never buy anything that came in a bag in the frozen section. Even when the only ingredient listed on the bag was “green beans” this man was sure we were ingesting poison. For him, “processed” foods were an absolute no-go.

Going back to our philosophy that there are no foods that are off limits, I want to address the concept of “processed” foods. Maybe I’m too liberal in my eating choices, but I certainly don’t consider foods “processed” simply because they’ve been cut or thrown into a bag. Besides, processing foods isn’t necessarily a bad thing and shouldn’t be equated with poor nutritional choices. There is a whole range of “processed” foods, from minimally processed to neon-orange-level highly processed. On one end of the spectrum you’ve got frozen vegetables with nothing added. They’ve been picked at the height of freshness, frozen right away to preserve nutrients and are a great way to make sure you’ve always got broccoli on hand. They’re also a great way to quickly make a stir fry for a healthy meal and they’re great for when you want to make a soup but don’t want to chop onions and peppers. And what smoothie is even a smoothie without frozen fruits? Heck, I “process” my own frozen bananas all the damn time. Then there’s grabbing pre-cut fruits such as watermelon or pineapple because you’re on the go and didn’t bring your chef’s knife in your purse —also “minimally processed” for convenience. I’m not going to scream that people must eat melon from the rind or it doesn’t count.

Then there are more heavily processed foods, like canned tomatoes and soups. Items like roasted nuts, and yogurt. Beans. Canned tuna. Those items still have nutritional value even though they’ve been “processed.” Sure, you have to start watching out for added sugar, sodium and fat, but to act like those items don’t have nutrition simply because they’ve been processed is preposterous. Processing actually has — gasp — benefits like when milk and juices are fortified with calcium and vitamin D. It lets you have packaged fruit as a quick option when you run out of fresh fruit. “Processing” in the form of freezing lets you have access year round to cherries and mangoes and peaches.

So, yes, we should definitely be eating more of the whole foods and minimally processed items. But don’t be afraid of some of those “processed” items or some of those middle aisles of the grocery store. How else will you buy your olive oil? Just read the labels and make choices that are right for you.

Are you a processed purist or do you embrace the right processed foods wholeheartedly like I do? —Erin