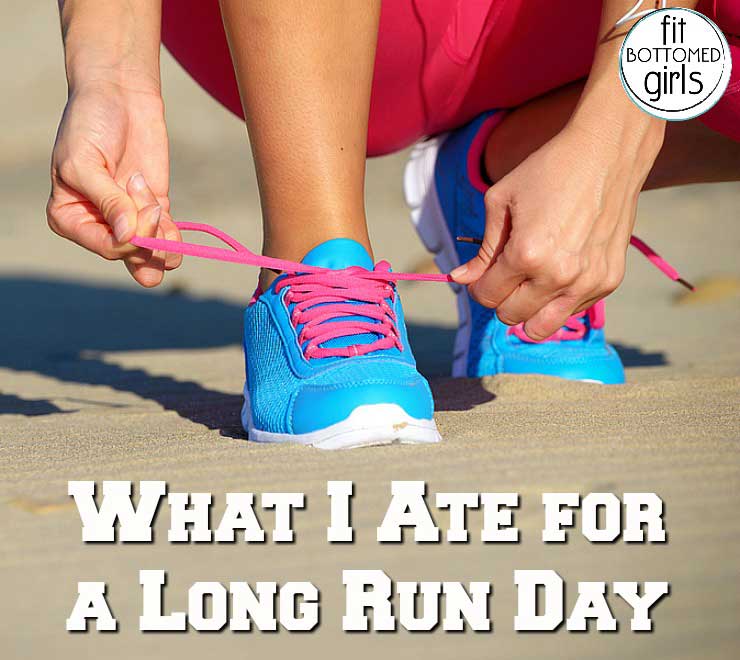 My friends, we have reached my favorite season, and that’s marathon training season.
I’m currently in the process of preparing for an April marathon, which means logging lots of miles and lots of smiles. If you think my enthusiasm is because I love running, you would be wrong. I mean, yes, I love running, but I really love eating, and marathon training means there’s a lot of food-to-face-hole action going on. It’s pretty much the best thing ever.
Of course, I can’t just eat anything and everything. Given that food is the fuel for my training, I’ve got to choose my eats wisely. You see, marathon training makes runners a special kind of hungry known colloquially as run-gry, where people have an insatiable hunger for very specific (and usually very unhealthy) foods, like french fries or ice cream or (and this has happened to me more times than I care to admit) french fries dipped in ice cream.
But when I eat those foods, I feel like crap. That’s why I’ve got to be strategic about the foods I choose on long run day — it’d be foolish to undo all the great work I’ve put into my training with a 24/7 buffet of Cheez-Its and frozen yogurt. (Great, now I’m craving Cheez-Its and froyo. You see what run-ger does to me?)
But I’ve found some strategies to indulge my run-ger on long run day without going overboard. For today’s edition of “What I Ate for a Day,” here’s how I noshed before, during, and after a three-hour training run. 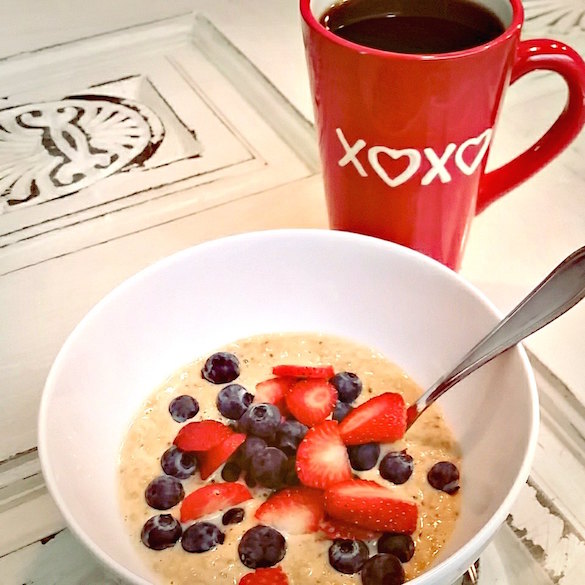 Long run day is a time for me to practice everything related to race day — not just the act of running itself, but what I’ll wear, what time I’ll wake up, and what I’ll eat before the big event. Because I travel so much for races, I’ve found it’s best to eat breakfasts I can find and make anywhere, be it my own kitchen or a hotel room in No Man’s Land. Pre-packaged oatmeal is my go-to race morning breakfast. It’s so easy to travel with — I just include a packet or two in my luggage, then stop at a local grocery store for fruits to mix in. If I forget to pack the oatmeal, I can find it at almost every supermarket or convenience store.
Today, I practiced my pre-race breakfast with oatmeal, chia seeds, and berries. Also, coffee. Always coffee.

In addition to rehearsing what I’ll eat before the race, my long run days are also a time to practice what I’ll eat during the race. That’s something I haven’t figured out just yet. After being diagnosed with Meniere’s Disease, I’ve had to cut back on my sodium intake significantly. That’s tricky for an athlete like me, since sodium is an essential element for maintaining hydration levels. Too much sodium, and I become dizzy and experience headaches; not enough, and I experience the dreaded runner’s bonk. My long runs are a critical time for me to experiment with different types of sports nutrition (each one has a different formula and varying sodium content) as well as how often I consume those gels and chews. Today, I practiced with GU gels and chews, which I tucked into my hydration belt along with a bottle of water. 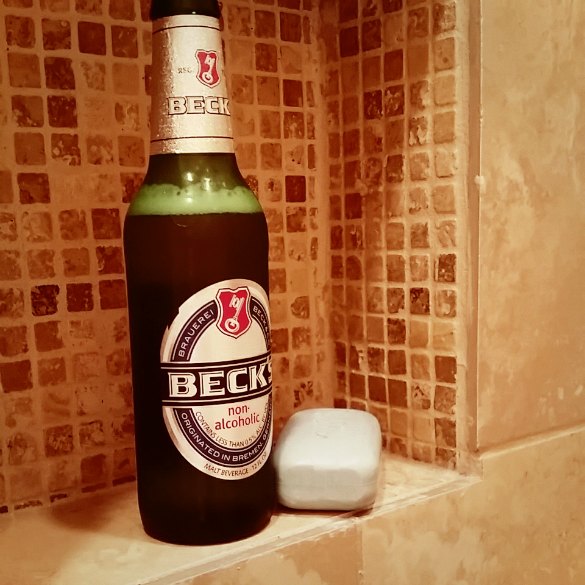 Oh, like you’ve never drank a beer in the shower before? Stop judging me, Judgy McJudgerson. The post-run shower beer is a sacred and delicious thing. It tastes like hops and victory (and sometimes a little bit of soap, if you’re not careful).
My shower beer isn’t the high-octane stuff, though. It’s the non-alcoholic variety. Before you make fun of me, know this: non-alcoholic beer is scientifically proven as a post-workout recovery drink. The regular stuff actually negates the benefit of your workout. I’ve been drinking the alcohol-free stuff for about a year now, and swear by it — I get all of the simple carbohydrates and none of the hangover.

Is there any breakfast better than second breakfast? I’m going to go ahead and answer that for you right now: No. No, there is not. Second breakfast is the best, because it’s the breakfast you’ve earned. After three hours of running, I earned this plate. 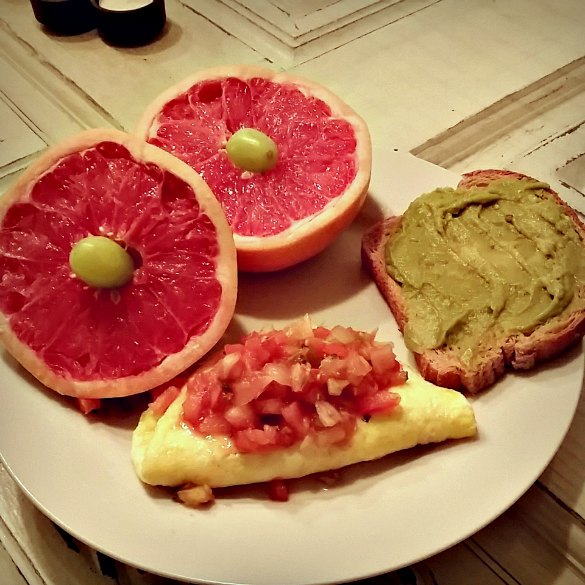 I normally crave a lot of starchy carbohydrates after a long run — bread, pancakes, donuts, and the like. Though those are all delicious ways to treat myself, I’ve found that when I eat a plate of mostly bread, I’m hungry again within an hour. That’s runger, and it makes me wander around the house like a zombie, putting anything edible into my mouth (and possibly some things that are not-so-edible — runger does not discriminate). When I eat protein-rich foods (like eggs and yogurt) and water-dense fruits and veggies, I seem to make smarter choices for the rest of the day. I still eat the baked goods post-run (because of course I do!) but they don’t dominate my plate. Toast (topped with avocado) is usually enough to satisfy my starchy cravings, while eggs and fruit fill me up with the nutrition I need.

For the rest of the day, I’m usually on the couch in my sweatpants, with my feet up to promote recovery. Sometimes I don a pair of compression socks, too. I use this lazy time to catch up on e-mails and/or sleep, depending on how much my run took out of me that day. By mid-afternoon, another case of runger usually strikes, and I have to respond quickly and rationally before my cookie-craving impulses take over. The first step, I’ve found, is to eat something. The second step is to stay away from food-related websites and television shows. A few weeks ago, I came across a recipe for a fancy Italian lemon cake while scrolling through my Twitter feed after my long run. Before I was aware of what was happening, I was at the grocery store in sweatpants and compression socks, spending 40 dollars on cake ingredients. Runger is a cruel mistress. 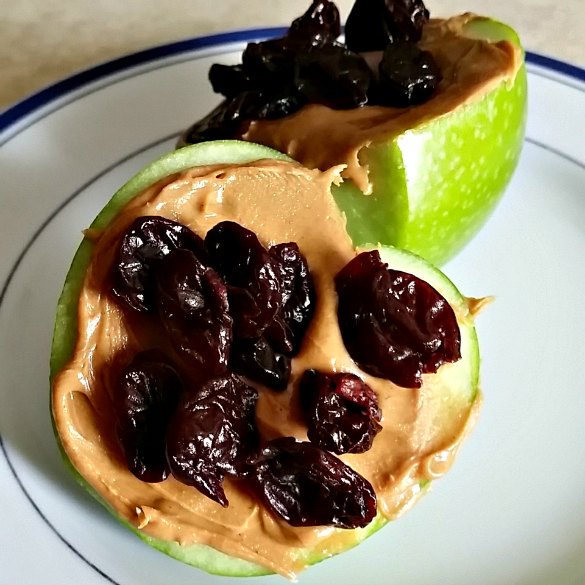 To combat these impulsive decisions, I pick a snack that is both sweet and satisfying. An apple with peanut butter and dried cherries hit the spot today. I also sipped on water throughout the afternoon to replace the fluids lost during my workout. 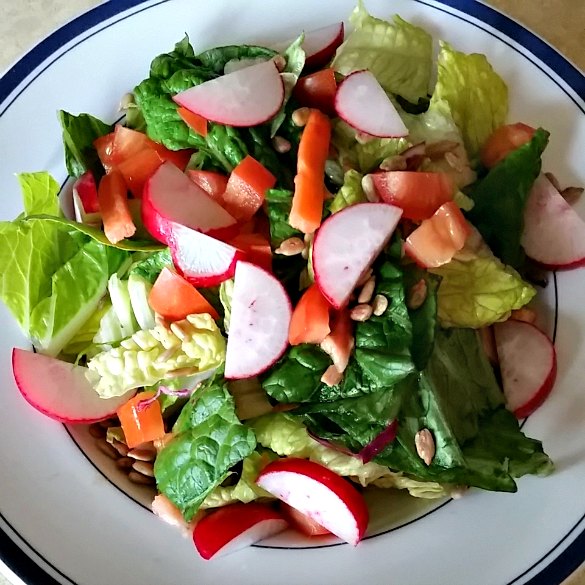 If I’ve made smart choices in the day so far, I’m usually craving something healthy, like a salad, by dinnertime. Once I get over that initial hump of wanting to eat ALL THE FOODS, I can coast for the rest of the day with smarter choices, like today’s big-ass salad with sunflower seeds and lots of fresh veggies. I also save room for dessert, because it’s long run day, dammit, and I want some ice cream. 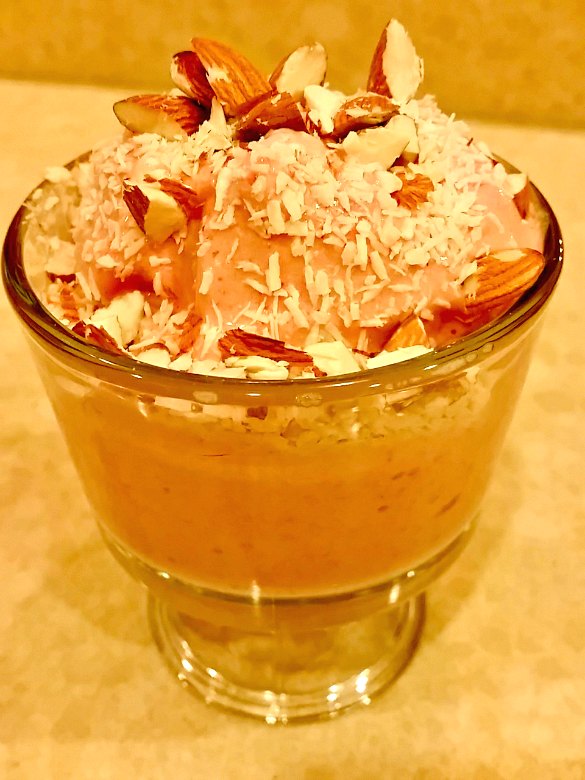 Don’t get me wrong — some long run days, I get in the car and drive to the froyo place for dessert, because … well, I don’t really need to tell you why, do I? Froyo is delicious. You know it, I know it, and runger definitely knows it. But today, I had all the makings in my house for a soft-serve treat. With a blender, all I have to do is combine frozen strawberries, a peeled orange, and a scoop of strawberry-flavored protein powder. When topped with coconut and chopped almonds, it’s a great sundae for a great day. 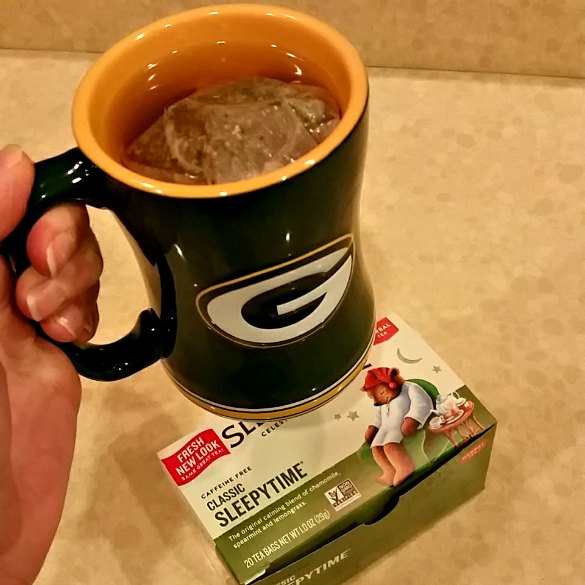 A good night’s sleep is important every night, but especially so the night after a long run. Slumber is the time when muscles repair themselves from the damage done the day before, and I try to get as much as I can the night after a long run. To help this process along, I brew a cup of Sleepytime Tea before bed. Within a few minutes of draining my mug, I’m hitting the pillow, dreaming of more miles and more delicious eats.
What are your go-to eats on long run day? —Susan