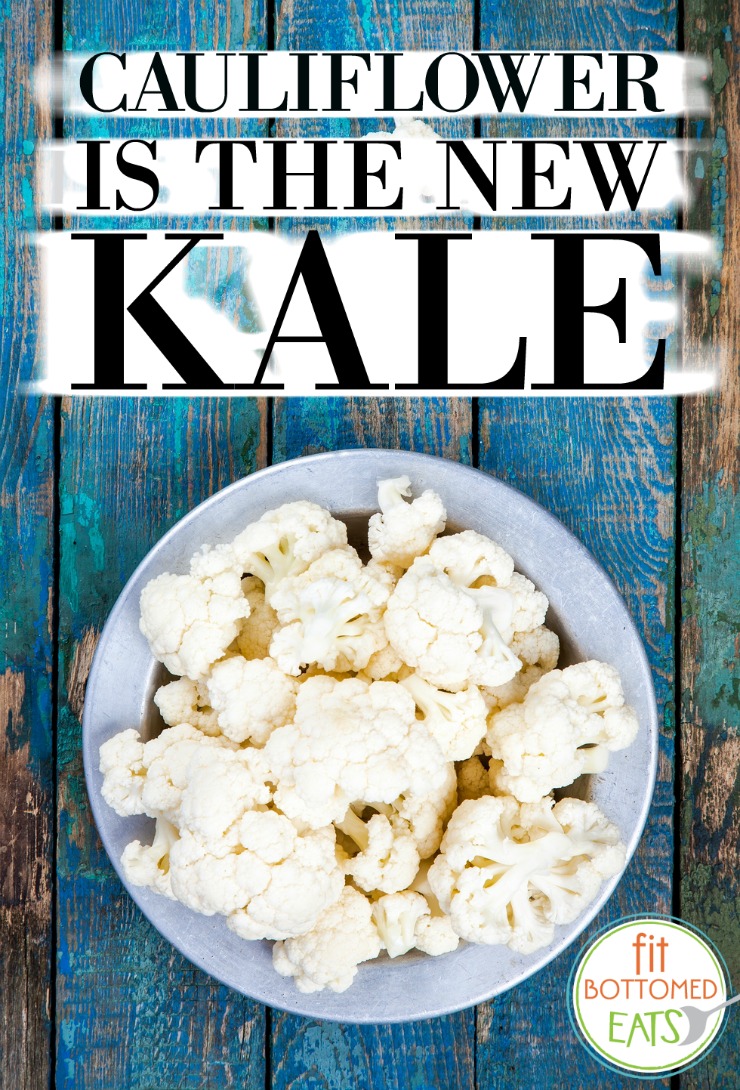 Cauliflower — it’s everywhere! Used to be you’d simply find it next to the broccoli in the produce section, bagged up and frozen, or hanging out with the ranch dip on a crudite platter. But now? It’s everywhere! People are making it into foods resembling rice, pizza crust, and mashed potatoes. We’ve even seen it blended into smoothies and baked into muffins (to which I personally say no, just no).
Jumping on the trend, companies such as Green Giant and Trader Joe’s have started selling pre-crumbled and recipe-ready cauliflower crumbles. The Green Giant version is in the produce section, and TJ’s is frozen (and harder to find than a unicorn). My Trader Joe’s has been sold out for a few weeks and an employee there told me that people stalk the frozen food department, calling them to see when a delivery is coming, then snap up a dozen bags at a time.
The phrase “cauliflower is the new kale” has come up in searches of food trend stories for the past three years. Because of the demand, there’s a bit of a cauliflower shortage and prices are rising. Okay, who’s responsible for this?
We blame our friend Jamie Van Eaton. Back in 2008, the recipe developer, blogger and writer came up with a cauliflower pizza crust recipe and shared it on a low-carb message board. She was looking for a low-carb alternative to pizza crust and her previous creation, which she called “oopsie bread” (now renamed “cloud bread” and also taking the Internet by storm) just wasn’t working.
But we’ll let her explain the phenomenon!
Q. How did you first start working with cauliflower?
A. The truth? I just wanted pizza. What’s more, I wanted a gluten-free, low-carb pizza crust. I remembered years ago, a neighbor of mine shared her rice-based pizza crust with me. Considering cauliflower makes an excellent low-carb rice, I thought, why not give it a shot? That was in 2008, when my cauliflower pizza crust was first shared with the world. (You can still see the recipe here at lowcarbfriends in all its archived glory.) Largely derivative of the pizza crust, I also came up with the cauliflower breadsticks and the cauliflower tater tots. Both also became pretty big hits that have since been shared pretty much everywhere.
Q. When did you realize that cauliflower crust pizza had really caught on?
A. That was totally unexpected. I knew the recipe was popular with low-carbers because it was a little weird (who makes cauliflower into a pizza crust anyway?). I think once I saw other websites using the recipe as their own (sometimes borrowing my photographs as well), I realized it was at least piquing interest. Then, it began showing up on national television, on Martha Stewart and Paula Deen’s sites, and it just kept getting bigger and bigger over the years. It amazes me how mainstream the recipe has become, so much so, people think I’m kidding when I tell them I created it way back in 2008!
Q. Where’s the coolest place you’ve seen the recipe shared?
A. Probably on Doctor Oz, but only because that was the first time the recipe made the mainstream media. To this day, only 50,000 of my closest friends know where the recipe originated. And while a lot of people are upset seeing me getting no credit for my work, I look at it this way: I created some extremely viral content powerful enough to also help other people, and that makes me happy.
Now the oopsie rolls (cloud bread) are the new big thing (those are mine, too! Ha ha!). It’s weird how many years it takes for something to hit the mainstream sometimes. I predict the chicken and cheese pizza crust I developed a few years ago will be the new, huge thing, especially since it makes a killer deep dish, bready crust. (Deep dish is something you just can’t accomplish with the cauliflower crust).
Q. Have you experimented with other vegetables in the same way? Any disasters?
A. So many efforts. So many disasters. I totally biffed what should have been a potato dumpling knock-off. That was pretty freaky nasty. Jicama fries were horrific. The turnips au gratin were lamentable. I made a zucchini pizza crust, too, but zucchini is so moist (I know people hate that word), it was really hard to get it to set up. I’ve also experienced some eggplant disasters. I try to write about the disasters, because they’re a reminder that every failed dish is a learning experience. And another opportunity for takeout.
Q. What’s your favorite cauliflower recipe? Care to share it?
A. Probably my favorite cauliflower recipe these days is cauliflower fried rice (boring, I’m sure). So many people don’t realize that even though cauliflower is fairly pungent, you can add spices to it for an authentic, ethnic vibe when added to meals. I love it! It’s just seriously simple and a great way to get your veggies in. For picky eaters, you could even cut the recipe 50/50 with real rice.