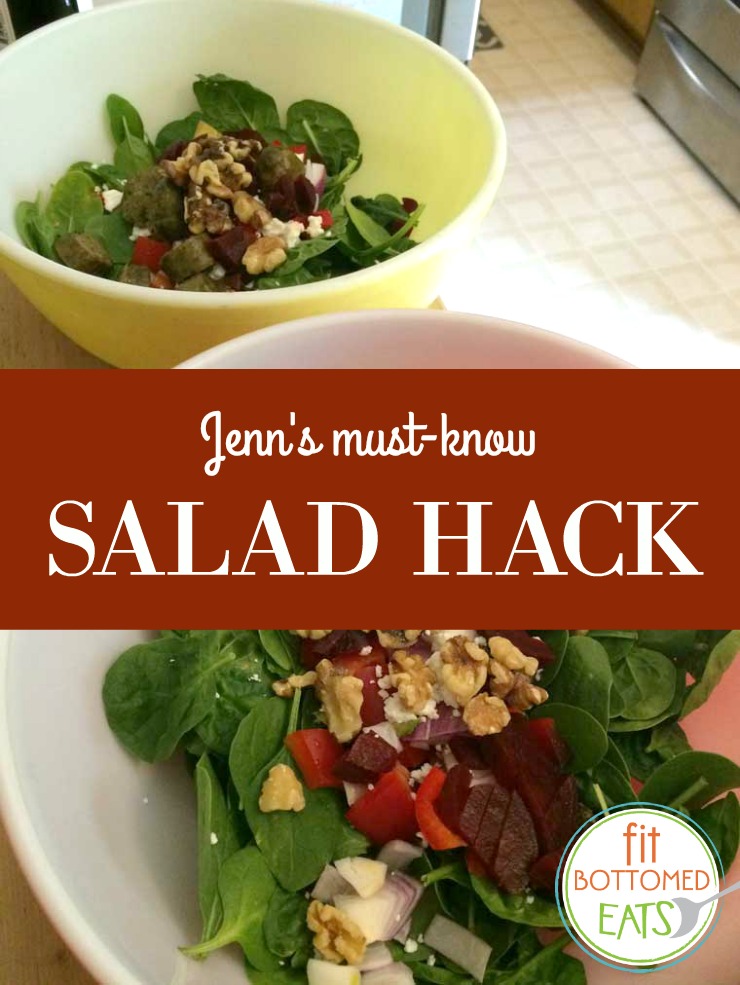 I don’t use the term “ah-ha moment” lightly. I mean, Oprah coined it for a reason — it’s that super special feeling when you just get something. A moment when you see something in a whole new way, and your whole perspective changes. It doesn’t have to be complicated. It can be simple. Almost duh-worthy. But it has to leave you feeling like you’ll never go back to your old ways again. And that’s exactly what this salad ah-ha moment was for me. It’s so obvious and yet so meal-changing.
I love my big ass-salads, but man I hate prepping them. The washing of veggies, the chopping, the cleaning. So. Many. Steps. And I’ve spent many a day thinking “man, if all my veggies were pre-chopped and prepped, I’d eat SO many more salads for lunch and dinner.” And then it dawned on me: I HAVE BEEN DOING THIS WRONG ALL ALONG. Instead of prepping a single salad, why not — all at once — do the prep for double (or even triple or quadruple) salads? Then you could easily make salads in minutes for the rest of the week.
Like I said, DUH.
I’ve been doing this for the past two weeks and my salad consumption has gone up, like 400 percent. (Okay, fine. I didn’t do the math, but that feels about right.) I take about 20 minutes to chop up my bell peppers, avocado, red onion, cucumber and beets all at once. Then, I either put those in separate containers or I go ahead and actually build full ready-to-eat salads (with spinach and nuts and goat cheese and some type of protein). I also go ahead and blend up some dressing (my latest obsession — thanks, Sheryl! — is 2 tablespoons of dijon mustard, 2 tablespoons of olive oil and 2 tablespoons of maple syrup blended to perfection) and store that, too.
Then, no matter how long or crazy my day is, I have a healthy and satisfying meal just waiting for me. (I don’t know about you, but when I’m rushing around and don’t get to lunch or dinner until later than usual, I’m way more likely to grab something less healthy and really dense rather than take the time to prep a salad because I’m so darn hungry. I’m sure that’s not just me!) Not to mention that doing it this way usually allows me to chop and use an entire onion or avocado, instead of leaving it in the fridge to possibly be totally forgotten (and end up in the trash a week later).
Maybe you’ve been doing this all of your life and I’m super late to the salad-loving party. It’s not like I’m reinventing the wheel here — meal prep is a very popular thing. It’s just that I never thought to do it with my beloved salads. So just in case you’re like me, I had to share.
Sometimes the best ideas are the most obvious ones, and I’m kind of embarrassed that it’s taken me 35 years on this planet to figure this one out. But better late than never, right?
What simple idea helps you to eat healthier or make cooking a breeze? I should probably do this with omelete fillings, too, come to think of it!  —Jenn