You know how you go on an awesome trip, and when you come home and people ask you about it, you barely know where to start? That’s exactly where I currently stand with the incredible trip I took to Eugene, Ore., earlier this month with Brooks Running. We’re Brooks Running ambassadors, as you might recall, and they invited all the blog ambassadors out for the 2016 U.S. Olympic Team Trials for Track & Field.

And yep, it was pretty much the experience of a lifetime. I mean, what those athletes did out there on the track? If that is running, I think I need to call the thing that I do something different, because wowza.

I shared a few words about the amazing, amazing eats out there already, but, considering we were only in Oregon for about 48 hours, there’s still so much to share. So, here goes nothing! 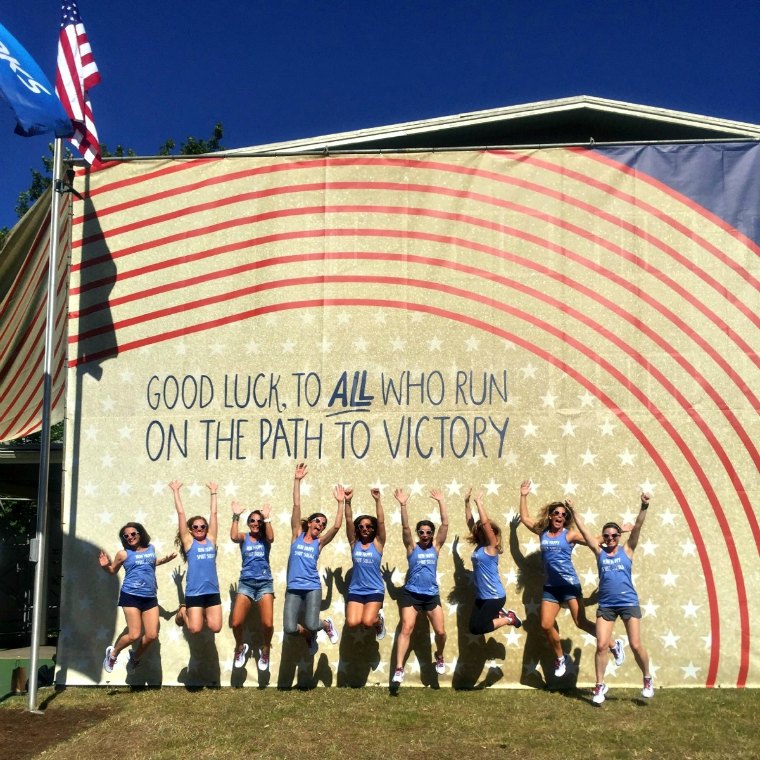 This is the side of the frat house. Seriously. (Plus, look at our shirts! We are the cutest.)

Staying in the Brooks frat house.

Oh, you think I’m exaggerating, like when I say that my house looks like a frat house when I haven’t cleaned in a while? No, Brooks set us (along with many of their employees) up in a fraternity house they’d rented (and cleaned — multiple times — and painted, and decorated like crazy) on the University of Oregon campus right across the street from Hayward Field, where the trials took place. We each had a roommate (I bunked with Lora, which I’ll be doing again — in Oregon, even — in a couple of weeks!), shared a bathroom, and grabbed snacks from the communal kitchen (two words for you: Red Vines). 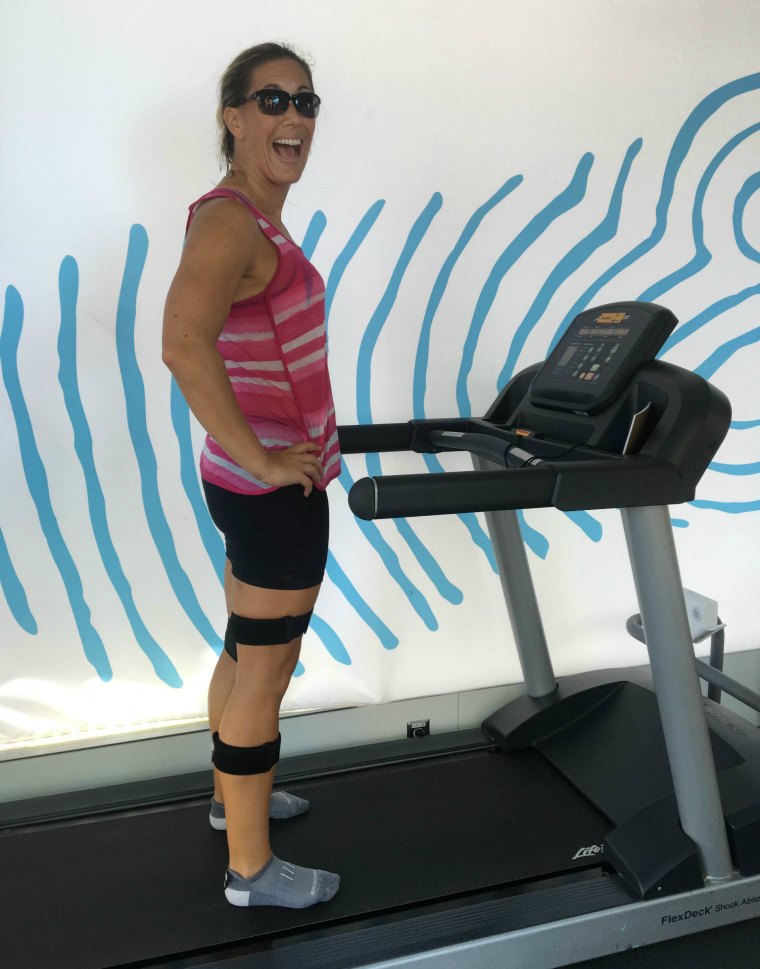 Getting my Run Signature on.

Getting my Run Signature analyzed.

Next to the frat house, Brooks had a super cool trailer set up with two treadmills and equipment designed to analyze our natural movement — both squatting and running — using their Run Signature technology. Looking at the similarities and differences in those movements helped the Brooks team determine which shoes best support our running style. Interestingly, my Run Signature suggested the Glycerin 14, which is one I hadn’t yet tried. (Spoiler: I have now, and YES. Yes, yes, yes. 10 miles of yes. More on that later this week!) Many of us got recommendations for shoes we don’t typically wear, and so far, all the feedback I’ve heard has been awesome. 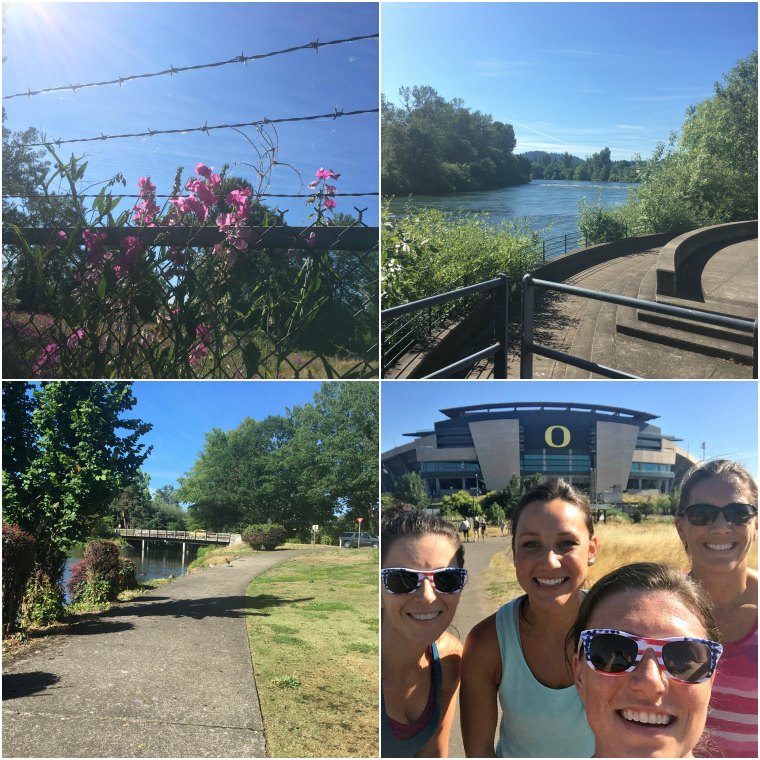 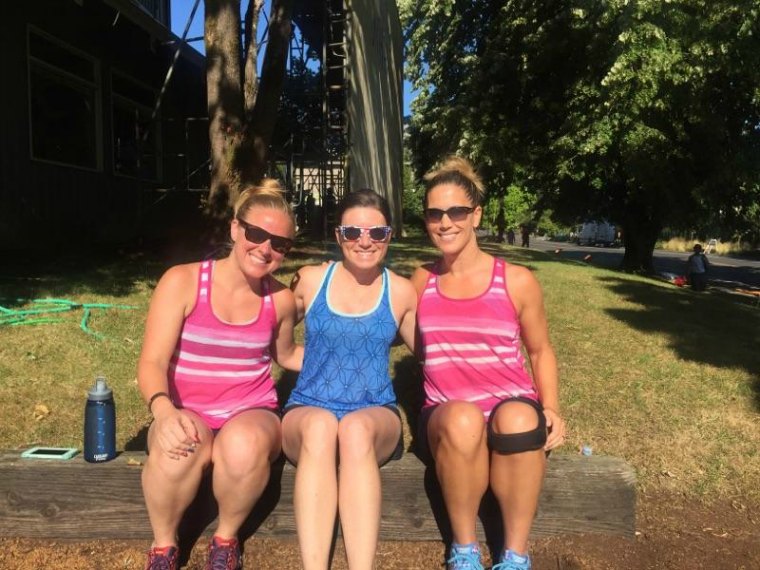 After an extremely long travel day on Friday, it felt fantastic to wake up to a sunny morning and cool temperatures Saturday morning. Brooks has a tradition of hosting a run each morning of the trials starting from the frat house, so we all jumped on board. My fellow blog ambassadors are speedy gals, and I had zero plans to actually run with them — I didn’t even bother bringing my watch or asthma inhaler or anything — so I was really pleased to find myself hanging right with them for the first couple of miles and not dying. I dropped back a bit after that and had just the most lovely run for the rest of the 4.5-mile route, stopping to take pictures or just take in the view now and again. I really, really love running when the humidity isn’t a million percent, as it turns out. (Sometimes I forget this.)

Sporting the cutest gear with my Spirit Squad.

I don’t know if it’s my team sport background or just a love of costumes or what, but I love showing up as part of a group all dressed similarly. Brooks provided us with matching (shiny!) tanks, sunnies, and a pair of the Women’s Launch 3 from the Victory Collection, and you guys, we just looked so adorable walking around. And also very fast, I’m sure. 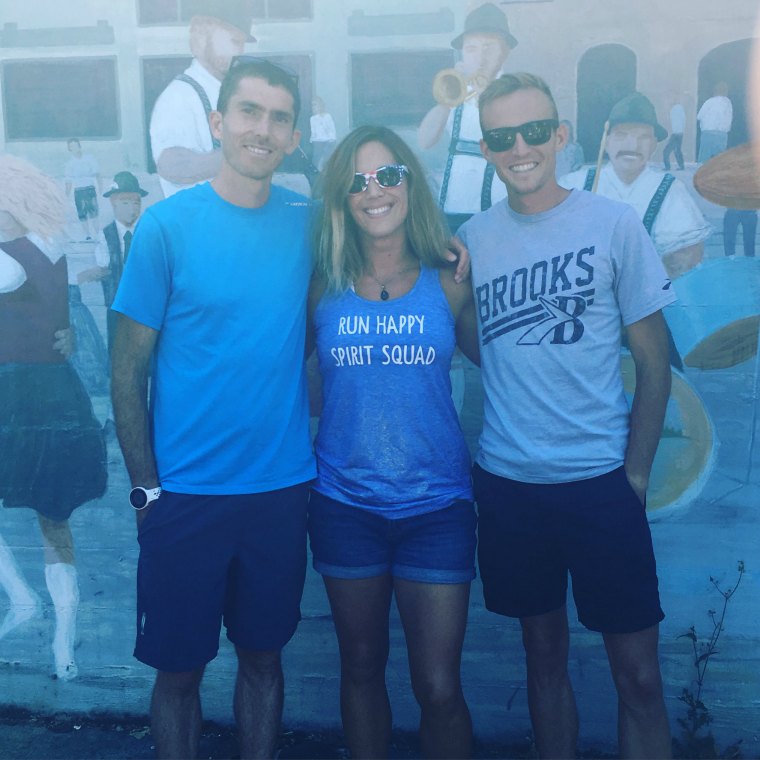 Lunch with the Brooks Beasts.

Not only did we eat well everywhere we went, but we also had a chance to chow down with Riley Masters and Garrett Heath, Brooks Beasts who competed in the 5000m. Our lunch date was July 2; they were racing July 4, but they showed few signs of nerves or anxiety. They were kind, funny, gracious, and, believe it or not, really interested in what we had to say. If you ever have a chance to cheer these guys on, do it — I can’t imagine any athlete being more deserving. 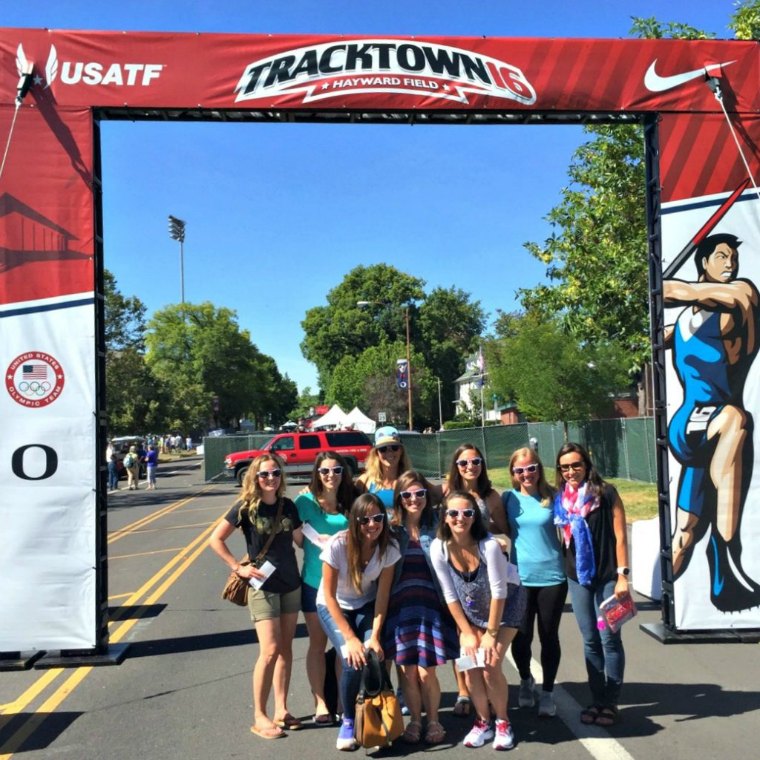 I didn’t participate in track and field in school, so not only did the level of talent blow me away, but also the scope of the event as a whole. There was so much happening at any given time — and the folks competing were the best of the best, making it all the more surreal. We had drama (people falling, tripping, giving up, making last second surges!), records were broken, and, of course, dreams were coming true even as they were shattering. It was intense. 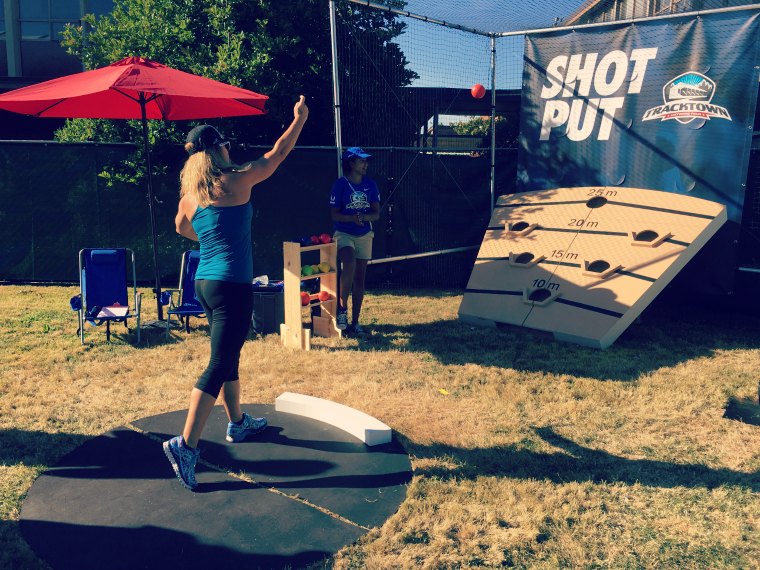 In news that will surprise nobody, I did not land a spot on the team.

If you have the opportunity to attend next time around (so … 2020), take my advice and go. You don’t have to be a superfan of any particular event to appreciate the incredible experience. Trust me.

As always, the trip wouldn’t have been nearly as much fun without my fellow blog ambassadors — and I have to say that it’s been almost as much fun to read about their takeaways from the trip after the fact. We all came with such different backgrounds and experiences that it’s little wonder we all found different highlights! I encourage you to check them out as well: Janae (Hungry Runner Girl), Anne (Fannetastic Food), Meghann (Meals and Miles), Emily (Daily Garnish), Lora (Crazy Running Girl), Jesica (rUnladylike), Tina (Carrots ‘N’ Cake) and Dorothy (Mile Posts).

Are you getting super pumped for the Olympics? After watching these events in person, I can’t wait to see how the track events go down in Rio! —Kristen