Today’s post is written by Julie Krashin, who lost a daughter, a twin, soon after birth. This is her daughter’s story.

This is an account though of neither the before or after. This is her life, her story.

On Christmas Eve morning 2013 (the date is just a coincidence and not significant as my family and I are Jewish), I woke my husband up at 6 a.m. after having taken my fourth pregnancy test that month. This one, though, was positive. I can still close my eyes and see him, laying in bed, head resting on the white pillowcase, smiling ear to ear. We had been married only a month, but we were ready. We were going to be parents. At our first doctor appointment, we learned there was not one baby but two. Twins. I thought this was going to be the defining before and after moment for my life. Little did I know.

In the end of April 2014, we packed up our Chicago apartment into a 26-foot U-Haul and prepared to move our lives to Kansas City. Something about twins in a small city apartment screamed “no thank you” to us. We were excited and scared, happy and joyful. We were a lot of things. Worst of them all, we were naïve. 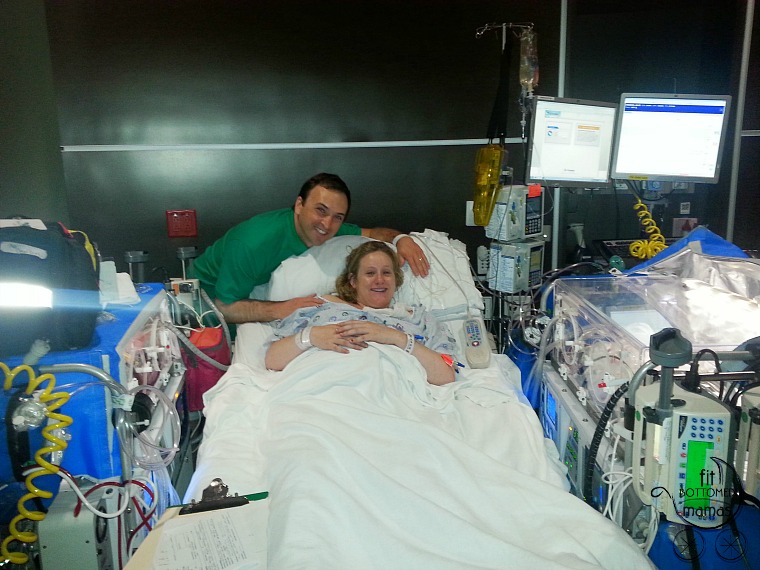 At around 26 weeks, I developed symptoms of pre-e and went on bed rest. There were some complications discovered with one of the babies as well. (At this point we had learned our fraternal twins were both girls. Sisters.) The combination of my pre-e diagnosis and the complications with the baby meant more doctor appointments and more monitoring. It was Monday morning, June 2 when my doctor felt the time had come for me to spend the rest of my pregnancy on bed rest in the hospital. I’ll never forget what she told me just before my husband and I left to drive over to be admitted. She said, “At some point, it will be safer for the babies to come out than it is for them to stay in.” She just didn’t know how long that would be. She couldn’t have predicted that a mere 4 hours later, they would be wheeling me back to the OR racing against the clock to get my babies out. 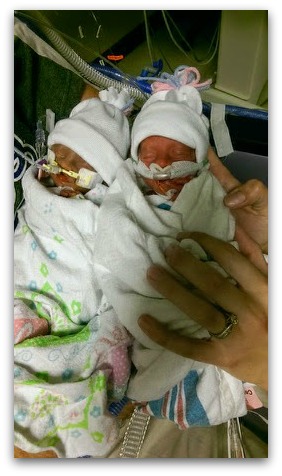 As the doctor stitched me back up and after each of the girls were intubated and stabilized, the amazing nurses brought them for me to meet. They had on tiny hats labeled A and B and were wrapped up in plastic wrap to help their tiny bodies retain heat. In the OR recovery room, my body shook violently from the shock and trauma, as I gave permission for my babies to receive blood transfusions and as I hooked up for the first time to a breast pump to try to make my body start producing milk.

I was 27 weeks and 4 days pregnant when I was suddenly no longer pregnant. And just a few short hours after, Goldie and Ilana were transported to Children’s Mercy Hospital. I had to stay behind. Before they were transported, the girls were brought to my room and we took our first and only one of two family photos. This is when the reality of my before and after starts to take shape.

Tuesday morning, my husband and our families got to go over to see Ilana and Goldie. My husband got to hold Goldie for the first time. Wednesday morning he went to Shul and before G-D gave them their Hebrew names. By Wednesday night, the final hours of my before had started to tick away. Around 9 p.m., the Chaplain at Children’s Mercy called and said something was happening with Ilana and that we needed to get there. It takes 30 minutes to drive between the hospitals and Jeremy got there in 15, rushing to be by our daughter’s side, rushing to the scene of our daughter coding, rushing to witness the nurses and doctor’s faces as they desperately and relentlessly worked to bring her back, their faces undoubtedly seared into his brain. 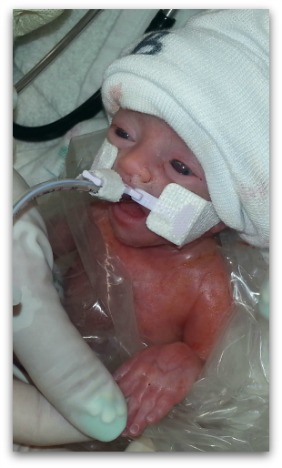 After shooing my nurse away several times, she finally came back with my doctor on the phone, who I told between sobs, what was happening. She and I both knew that I needed to go be with my baby and discharged me early. My father and father-in-law picked me up to take me to Children’s. I can only imagine how awful that drive was for them, but they sat silently the whole ride listening to me repeat over and over, “Please let her be okay, please G-D, please protect her head, please protect her.”

By the time I got there, much of the chaos had calmed down. Ilana had stabilized. Jeremy and I spent the rest of the night moving between her bedside and a small room they had given us on the NICU floor. We stood by her for an hour, then went back to the room where I pumped and we tried to sleep for a little before going back to be with her. In the early morning, the social worker came and told us the doctor wanted to have a meeting with us to discuss what had happened the night before. This meeting is the before and after I knew my child would die. He told us Ilana had six major complications that individually would be extremely unlikely for her to overcome at this gestational age. He told us that there was nowhere for him to go up in support, she was at the highest level they could give. Her tiny body, on ventilator settings that would be considered high for a full grown adult. We asked as many questions as we could and he answered them all. The hardest one to hear was, “Yes, she is probably in a lot of pain.”

I thought the hardest part about becoming a mom was going to be deciding what outfits my babies would wear home from the hospital. Would they be matching or just coordinating? I thought the most challenging part of becoming a mom was going to be the sleepless nights and figuring out how I was going to soothe and feed and diaper two babies at once. I never thought it would be saying goodbye when I had barely said hello. I was supposed to be part of the moms of multiples club. Not the club for moms who bury their babies. My babies should have still been safe in my belly.

By around 2 p.m., we had updated our families. Told our siblings they would lose a niece, our parents they would lose a grandchild and my husband’s grandma that she was going to bury a great grandchild. There is little in this world that is crueler than death happening out of order.

The last few hours of Ilana’s life were beautiful. She was surrounded by her family. I never left her side except to pump for her sister Goldie, who was also still fighting for her own life. I stood there with her dad; I held her hand as I talked to her nonstop. I told her everything I could think of. Everything from what I love about her dad, to the people she would meet in heaven and even my favorite nail polish color. I tried to tell her everything she’d learn. Everything I would have told her before I left HER. I told her there were not enough moments left but that she would live in my heart forever.

At around 9 p.m. we took our tiny baby out of her incubator. We held her and kissed her and we took our second family photo. With my husband’s arms wrapped around me, we held Ilana until she left the physical world.

Goldie spent the next 90 days in the NICU. She is now a healthy, happy and lively 2-year-old and big sister to Mona Ilana Krashin, born this past January. Sometimes I look in Goldie’s eyes and I think about how all of this is going to affect her and her life. Right now, this is all happening to her father and me, but this is her story, one that she has to embrace. Has her life defining before and after already happened? —Julie