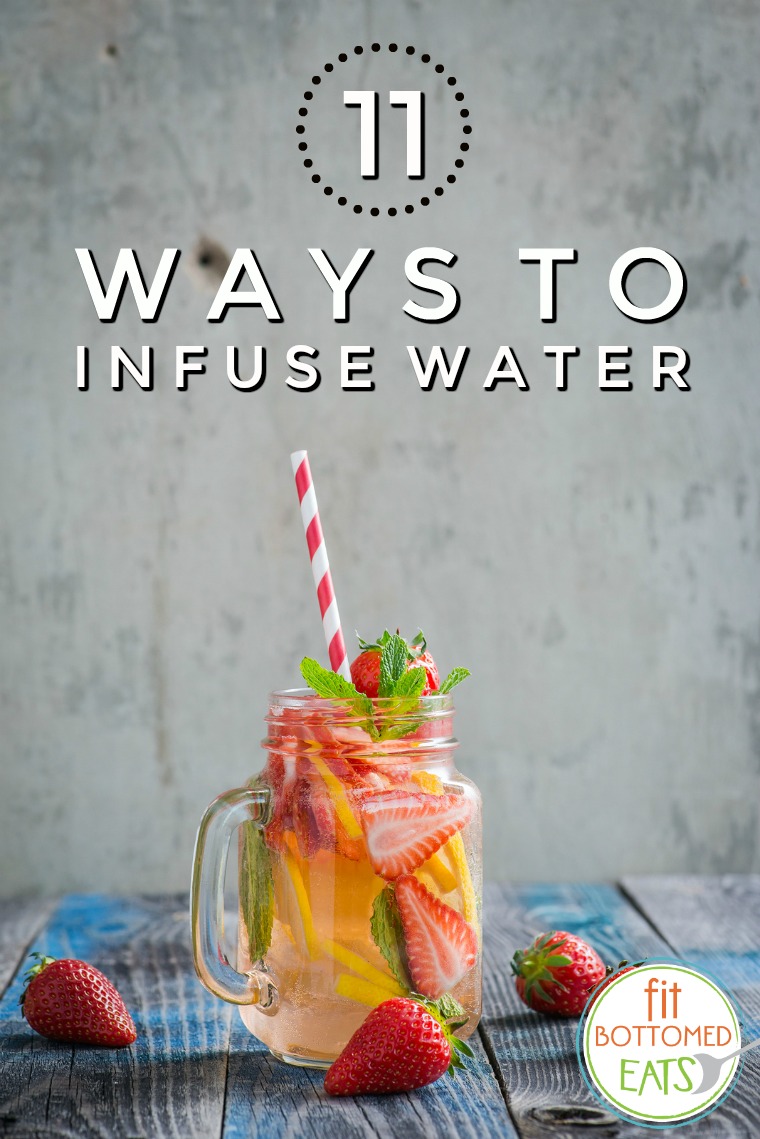 When I was in Portland a couple of weeks ago, I grabbed some infused water from the beverage dispenser in the lobby. Was that … apple and cinnamon? It was! I went back and poured another cup, and then another. (Don’t judge me.) It was so delicious — how had I never thought to infuse my water with those flavors?
And it got me thinking about how to infuse water with other unusual flavors. Don’t get me wrong — I love water infused with lemons, limes, cucumbers and clementines as much as (or maybe more than) the next gal, but I’m all about keeping hydration interesting. So, Jenn and put our heads together and found a few awesome ideas for how to infuse water with flavors you might not have thought about before!

How to Infuse Water With Fruits, Veggies and Spices

Mango Ginger: Dr. Christopher Calapai, D.O., a NYC anti-aging expert and long-time health advisor to the New York Rangers hockey team, suggests this combo, saying, “Mangoes contain so many vitamins that help boost your immune system. It has antioxidants that maintain youthful glowing skin and aid in the production of blood cells. Ginger is also helpful in fighting infection, has been linked to lower cholesterol levels, may reduce muscle aches and helps digestion.”
Grapefruit Rosemary: This is another Dr. Calapai suggestions, and for good reason. “Rosemary improves circulation and sends more blood to the brain which is linked to greater concentration and potentially reduces risk of Alzheimer’s,” says Dr. Calapai.
Watermelon, Honeydew and Cantaloupe: “This melon variety tastes great and is amazing for your skin,” says Dr. Kally Papantoniou, board certified dermatologist and clinical instructor at Mt. Sinai Hospital in New York. “Melons are immensely hydrating, meaning more hydration per cup of water. They are also chock-full of antioxidants that keep skin clear plus they contain vitamins that promote collagen production which helps skin cell turnover.”
Citrus Mint: Pick your favorite citrus fruits, cut up into slices and add some crushed mint, suggests Dr. Calapai. “Mint actually contains salicylic acid, a potent acne fighter,” says Dr. Papantoniou. “It’s also well known for its anti-inflammatory properties which work to calm irritation both on your skin or internally,” she adds.
Cucumber Lavender: “The reason so many spas use cucumber-based treatments is because it contains many skin friendly minerals like magnesium, potassium and silicon,” says Dr. Papantoniou. “This mix is especially healthy,” says Dr. Calapai. “Cucumbers are powerful detoxifiers, flushing out any waste in your system. Adding crushed lavender to the mix not only adds a beautiful aroma but can also help digestion as lavender contains polyphenols that reduce bad bacteria in your gut, making your system run smoother,” he explains.
Pineapple Coconut Water:  Get your favorite store bought raw coconut water and refrigerate over night with large chunks of pineapple. The coconut-pineapple flavor combo is delicious and reminiscent of a piña colada without all the sugar and calories. Coconut water contains electrolytes which plain water does not — super helpful for rehydration. “Pineapple is yet another fruit that aids in collagen production,” says Dr. Papantoniou. “This is not just great for beautiful skin; collagen also has a major role in bone health and tissue repair.”
Peach Sage: Sound delish? It does to us! Nicola Brown at Fix.com offered this recipe suggestion, along with the next two, and they sound ah-mazing.
Apple, Ginger and Lemongrass: Spicy and refreshing!
Raspberry, Rose Petal and Vanilla: Perfect for winding down at the end of the day.
Apple, Plum, Pear and Cinnamon: Krissy Allori at Self Proclaimed Foodie said she not only loved this recipe herself, but her kids were also big fans.
Strawberry, Lemon and Basil: You’ve probably had strawberry-infused water or lemon-infused water, but how about strawberry and lemon with a savory herb like basil? Guys, this water recipe is an energizing way to start your day.
What are your favorite flavors for infused water? —Kristen & Jenn