After having nerves and butterflies all week — along with my cold — I was surprisingly calm when my alarm went off at 3:45 a.m. the day of the Brooklyn Rock ‘n’ Roll Half Marathon. I bounced out of bed, which is not something I typically do. EVER. Fifteen minutes later we were out the door to pick up some coffee on our way into the city.

My husband and I arrived at our parking garage in Brooklyn and decided to save our legs and Uber the mile up to Grand Army Plaza where everything began. We were part of a small group of early birds there, but I didn’t care — I was happy to be where we were going. We quickly asked the Elvis at the Information booth where the VIP experience started (as Brooks Running Ambassadors, I got hooked up with VIP bracelets after I signed up for the race myself), and learned that we would be in the Brooklyn Public Library. Which meant out of the cool air, with toilets. Woohoo! 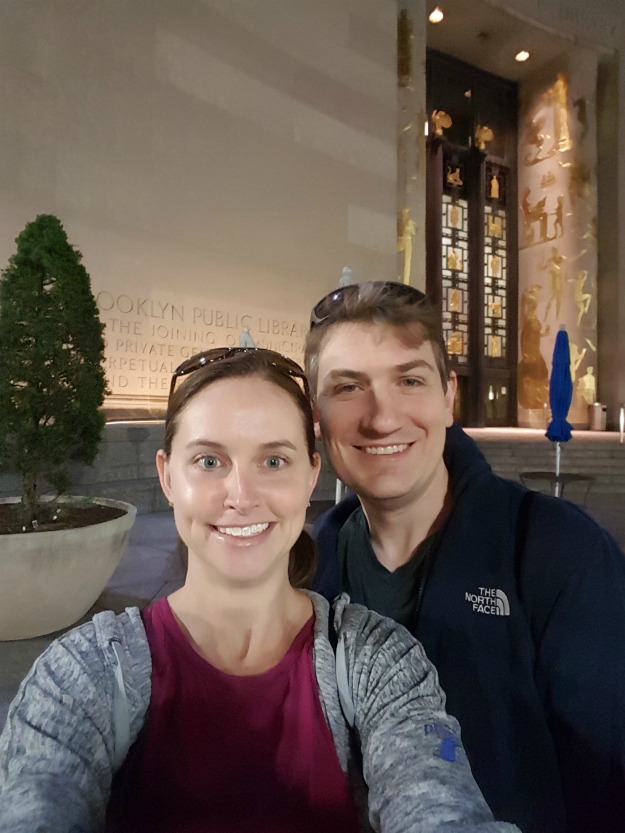 We settled in the library, grabbed a bagel and waters and went to the bathroom several times before we had to check our bags and get through security. Once through security we were ready to roll up to our corral and get going.

When 7:00 hit, the corrals started getting released. We had some time to kill as we waited because we were back in corral 15. But before we knew it, it was our turn and we were off. We already had to pee. 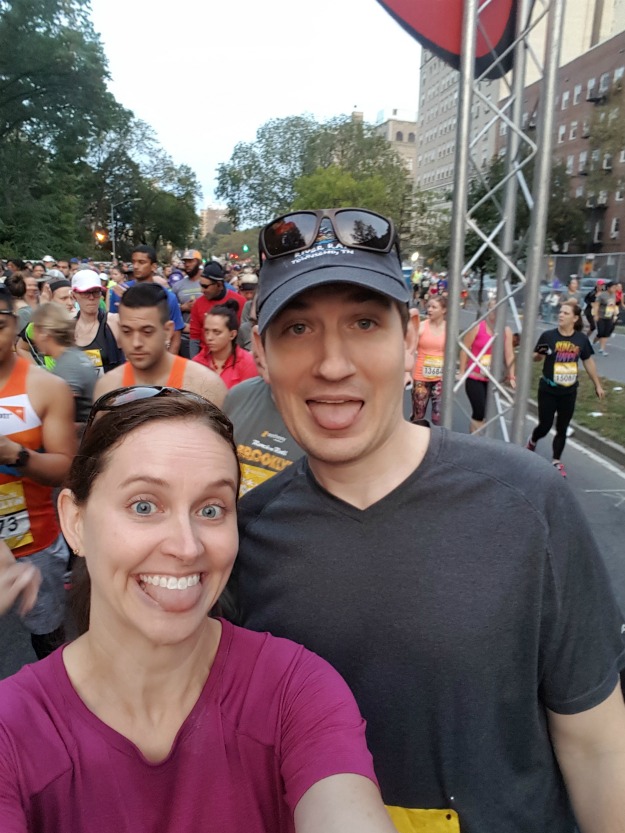 At roughly .7 miles in I hit my first snafu: I was switching my watch from heart rate to pace and I tripped on a large tired-sized piece of broken wire. The women behind me snagged it as well and we were all trying to figure out what the heck had happened, but the crowd was so massive behind us that we couldn’t really stop to get it off the road. Luckily I didn’t fall or cut myself on it, but I sincerely hope it didn’t give anyone behind us problems.

We settled into a slow and steady pace, which was made easier by the fact that it would have taken a lot of navigating to get through the crowd. We decided slow and steady would finish the race, so we settled in for the long haul.

By mile 2 we started scoping out porta-potties because we really had to pee. We passed up several that had lines — we weren’t about to add 10 minutes to our blazing time to stand waiting for a bathroom (insert cry-laughing emoji here). At mile 4, I glanced over and saw a wonder: four porta-potties, zero line, two unoccupied. Score! We hit those and were back on the road in under a minute.

At that point I ate a couple of energy chews and had some water. Coincidence or not, it was roughly that time that I started feeling stabbing cramps in my gut. I didn’t even mention them to Alan because I thought if I kept it to myself, they didn’t really exist. Luckily, they’d come and go so I wasn’t in constant pain.

From mile 4 to mile 10 was an out-and-back, with the turnaround at mile 7. For entertainment at the turnaround were crazy pogo-stick guys jumping and doing tricks. Then I saw a pug, which I took as a good omen. At roughly mile 8, Alan started experiencing severe nipple chaffage. We stopped at the medical tent for a few minutes hoping to grab a couple of bandages but decided it wasn’t worth it to wait in line and fill out a form just to get Band-Aids. He grabbed some Vaseline and hoped for the best. From that point on, he was running holding his shirt away from his nipples, no doubt an energy sink — and kind of funny in a sad way.

Right around that time we saw a marching band drumming with a dozen young kids giving out high fives. It was such a boost — they were so excited. It cannot be overstated how much the on-course entertainment — bands, drummers, musicians, orchestras, cheerleaders, the pogo-stickers — and spectators were key in keeping us going. Spectators who were there purely for the spectacle, spectators who were there to cheer people along, all of them gave us such a push. The funniest signs we saw: “If Trump can run, so can you!” and “Netflix marathon tomorrow” along with a sign “Go Maggie! I hope your nipples aren’t bleeding” gave us laughs along the way.

By mile 10 I was still feeling good, a couple of aches here and there — a bit of a tight calf, a twinge in my left arch, tired knees, but Alan started struggling a bit. He told me to leave him behind but as we were celebrating our 11th wedding anniversary, there was no way I was leaving him. Instead we slowed our pace a bit so we could recover. By mile 12 he was pretty done — right as the course threw a big climb at us. The people running slowed to a turtle’s pace and we went with a walk up the steep incline.

After the hill, we knew we were in the home stretch. I swear, I could have sprinted across the line I was so pumped. I felt my familiar feeling of being overcome with emotion as we crossed the finish line together — and then had to focus on getting Alan some calories and a spot to sit as he was feeling pretty rough. After some nuts and chocolate milk, we were back in business and able to soak up the feeling of accomplishment (me) and the feeling of survival (him). 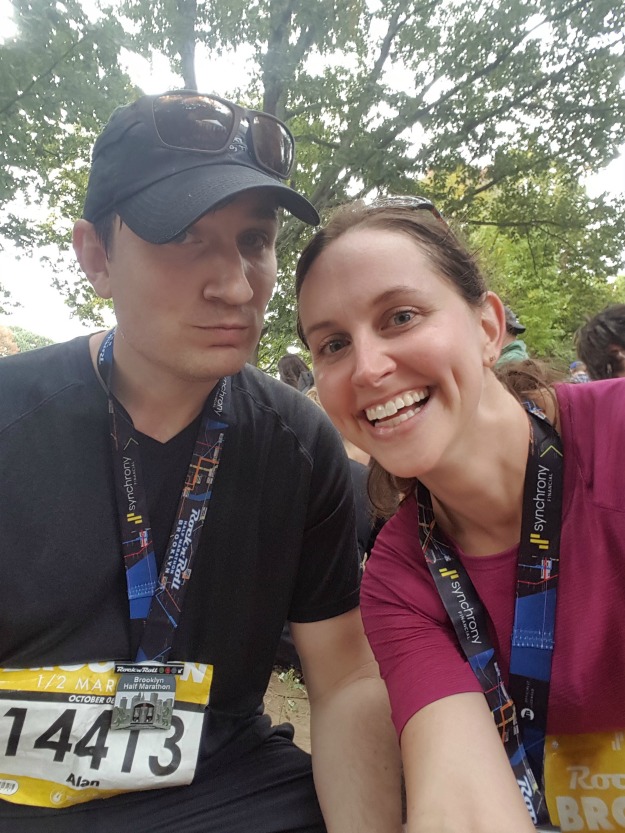 Brooklyn Rock ‘n’ Roll Half Marathon: By the Numbers

Bathroom stops on the course: 1

Times I had to blow my nose: 2 (thanks to a handkerchief I tucked in my pants!)

I cannot imagine doubling that distance.

Always be a spectator if possible and convenient. You make peoples’ days.

I tip my hat to people who let nothing get in their way. We saw a man with a broken leg on wheels, two people in wheelchairs and a blind runner. Kudos.

GI distress after distance runs — though never previously experienced by us — is legit.

I just might be thinking about signing up for another …

It was so much work preparing for this race. I had a lot of setbacks — a couple of colds and illnesses, a vacation — but I’ve never been more consistent with training and running. It might not have made for a blazing time, but it did make for a super enjoyable experience and I’m so glad I did it! The stomach cramps are already fading from memory but the feeling of accomplishment will remain strong.

Did any of you run the Brooklyn Rock ‘n’ Roll over the weekend? How was it for you? —Erin