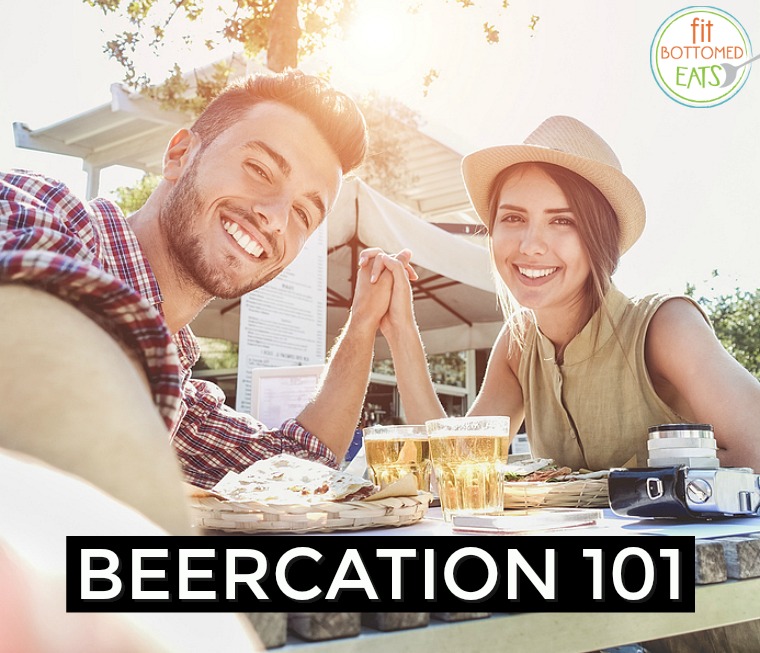 Want to put a tasty twist on your next vacation? If you consider yourself a hophead or a sucker for stouts, you might want to get in on one of the latest travel trends among foodies — a beercation!
To learn more about what a beercation entails, I went to Julia Herz, craft beer program director at the Brewers Association and publisher of CraftBeer.com to see what she had to say about beer tourism — and see if she had any tips or tricks you want to know about before you book your next vacay.
Fit Bottomed Eats: Beercation! That sounds awesome. What are some of the top U.S. destinations?
Julia Herz: The top six large metro destinations are Portland-Vancouver-Beaverton, OR-WA; Denver-Aurora, CO; Seattle-Tacoma-Bellevue, WA; Portland-South Portland-Biddeford, ME; Colorado Springs, CO; and Santa Rosa-Petaluma, CA. If you’re looking for a smaller area, you might want to look into Bend, OR; Boulder, CO; Fort Collins-Loveland, CO; Corvallis, OR; Missoula, MT; or Burlington-South Burlington, VT. Looking for a different location? Travelocity’s list goes 20 cities deep.
FBE: What factors went into naming those destinations as the best?
JH: Travelocity used four factors:

FBE: If someone is interested in booking a beercation, is there anything you’d recommend they do to prepare? Should they study up on beer local to the area, or is it better to taste and learn on the spot? Should they book a tour or do their own thing?
JH: Book a beercation to where interests you, and the breweries will be there ready to receive your smiling face. Today 78.5 percent of Americans live within 10 miles of a brewery, so most any market has amazing world-class beer being made locally and serving it up straight from the source.
When it comes to picking the breweries, there are great insider apps like Brew Guru and Travelocity that have pre-arranged discounts. Websites like CraftBeer.com have the full list of U.S. breweries and the stories behind today’s small and independent U.S. craft brewers. Be open minded to touring both the heritage craft brewers (it’s so great to taste beer you’ve had already or heard about when at the source) as well mix in touring the newbie breweries. I also like to always build in a day to just wing it. Often while hanging at one brewery, the staff and visitors turn you onto the next great brewery that is nearby.
There’s also how one travels. By foot, car, boat, bike or train, there is always a new way to take in different breweries. Plus many people who love touring breweries are into the outdoors. Activities in-between the tasting are never far from the breweries. In a poll from Harris and Niesen from 2016, 80 percent of people that drink one craft beer a month consider themselves health conscious compared to 76 percent of non-craft drinkers.
FBE: Are beercations only for people who consider themselves craft beer snobs? Or would you recommend them for a newbie beer drinker who’s just beginning to explore the world of craft beer?
JH: Beercations are for anyone who want to experience beer culture up close and personal with the makers themselves. You can take a quick backyard getaway, a break from a business trip or have your beercation be the main reason for beer-focused vacation travel. Beer snobs are few and far between. Most every person you would meet in a brewery are friendly, happy and interested in sharing their passion for beer with others. Usually new friends are made each and every sip.
FBE: Are there certain destinations that are better for people with different tastes? Like, should an IPA lover go to one area, while a sour drinker might go elsewhere?
JH: Since the U.S. is now the number one destination for beer on the planet, the diversity in each beer market is exponential. However, there are some styles of beer more concentrated in certain regions. So if beer terroir is of interest, try San Diego for West Coast style IPA and New England for New England IPA or the pacific northwest in the fall for fresh hop beers and the south for pecan-influenced beers. Local ingredients are a true feature being utilized by many of today’s small and indie craft brewers. Persimmons, walnuts, choke cherries, pumpkins, specific styles of oak, popcorn, grapes, apples, honey, chilies and more. Today’s brewers are like chefs.
How’s a beercation sound to you? I had a great time spending a day touring breweries when I was in Portland, Ore. last summer, and I’m dying to give Asheville a proper look, but the list above has me thinking I might’ve overlooked some other awesome beercation destinations! —Kristen