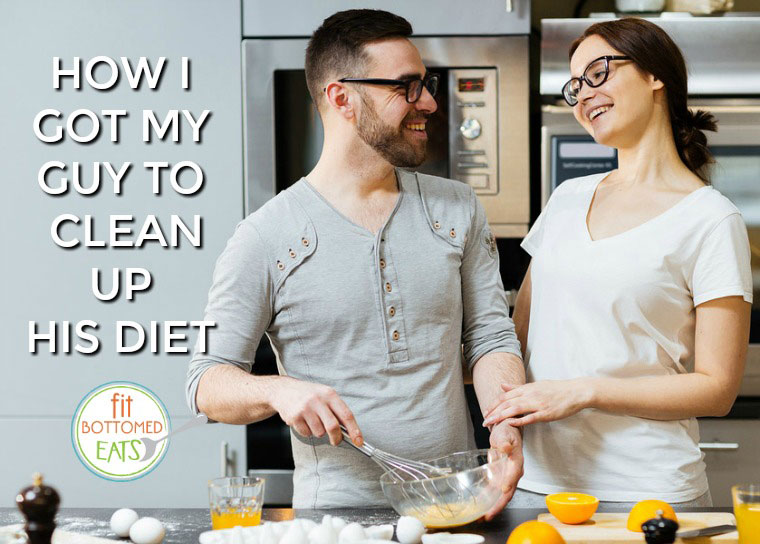 My husband would tell you that he eats a pretty healthy diet. And honestly, he’s not wrong. For the most part he makes wholesome choices, with the exception of the occasional convenience store hot dog. (Pro health tip: Probably don’t buy your lunch at the same place you get fuel for your car.)
But when I met him, it was another story. His diet lacked nutritional variety. It included too many processed foods and he seriously needed to up his fruits and veggies. It was relatively easy to get him to make the switch; I just had to point him in the right direction and let his taste buds take over. Here are four tips you can use if you’ve got a guy (or a gal) in your life who could stand to make a few healthier choices.
Inspiration from the tube. A lack of cooking skills had kept Bill confined to a few basic recipes. My remedy: let’s cook together. He’d pick the recipe, usually something he saw on Diners, Drive-Ins and Dives; we’d drink wine and make a day of it. Our “cooking dates” demystified the kitchen and broadened his food horizons. Plus? It was fun to get in there together!
Make it a little less meatcentric. Like a lot of guys, Bill focused on the protein part of the meal — but protein doesn’t have to just mean meat! For example, I added a mashed can of pinto beans to his all meat and cheese “man tacos.” He thought the healthy addition tasted better, and he was pleasantly surprised to be full after eating three (instead of his usual five). I was happy to see him add a decent serving of dietary fiber to his meal — and cut back on the saturated fat.
Swap the processed stuff for real food. I’ll never forget the first time Bill tasted real aged Parmesan cheese —it blew his mind. Right then and there he swore off the stuff in the shaker top can. Once I clued him in on what to look for on a label, other healthier real food choices followed. One of the easiest ways to encourage real food choices starts with a trip to the grocery store — if you stick to the perimeter (produce, meat, dairy), you automatically avoid a large percentage of the processed foods that so often end up in the grocery cart!
Create opportunities for low-pressure sampling. Bill had always tried to include fruits and veggies in his diet, but he often found himself bored with the lack of variety. He grew up eating iceberg lettuce, carrots and green beans, so he naturally navigated toward the produce he knew … and only toward the produce he knew. So, at restaurants, I made it a point to order something outside of his comfort zone so he could sample without committing. Today Bill is willing to try anything and we eat plant-based meals at least once a week.

Have you had success changing your significant others’ diet? —Karen