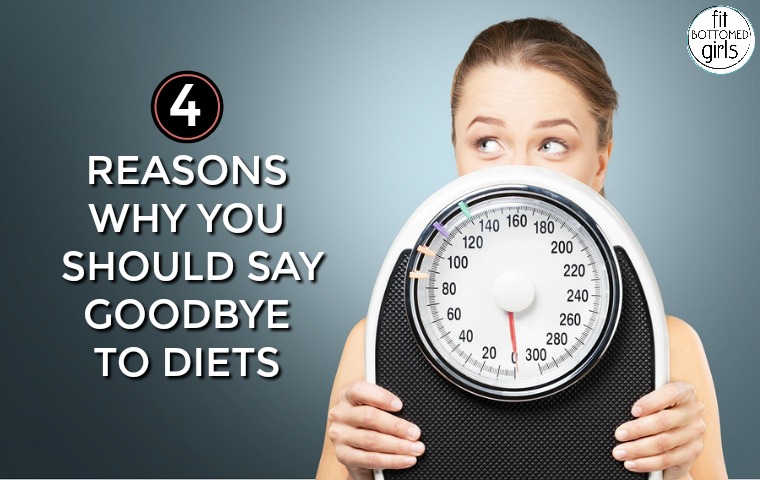 How many diets have you tried in your lifetime?

One study found that the average 45-year-old woman has attempted 61 diets! That might shock you at first thought, but consider what it means to go on a diet …

By definition, a diet is “a special course of food to which one restricts oneself, either to lose weight or for medical reasons.”

When you were on your last diet, what sort of thoughts did you find running through your mind?

The entire concept of dieting is built on negativity: You can’t. You shouldn’t. How dare you! That’s why it’s time to ditch dieting for good.

4 Reasons Why You Should Say Goodbye to Diets

Not only do diets foster a lot of negative inner thoughts and feelings that can be destructive over time, they also don’t work. Let me say that again: Diets do not work!

1. Diets Have a Proven Track Record of Failure

This year, Americans will spend over $60 billion on dieting and weight-loss. You’d think that all that money and time spent would lead to a fitter, healthier population, but that’s not the case. 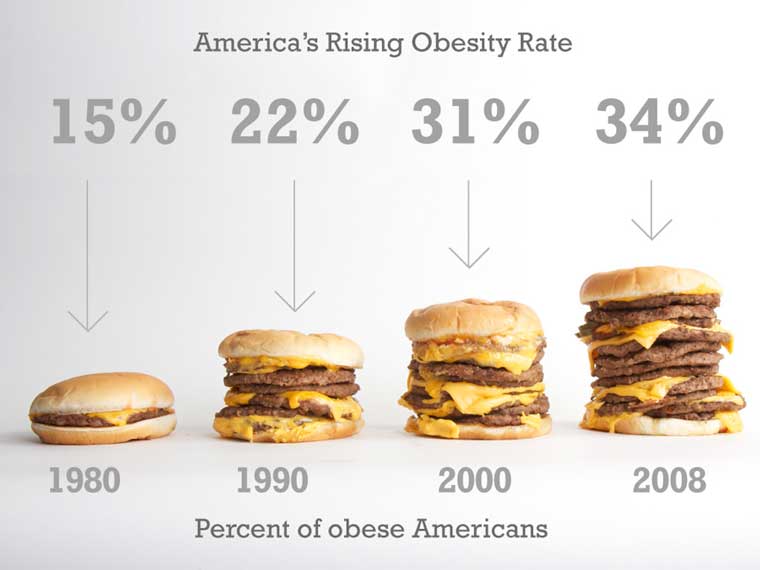 In fact, over the past 40 years, as dieting efforts have increased year over year, so too has our obesity problem. We are dieting more, but we aren’t losing any weight.

You know the famous saying about insanity: 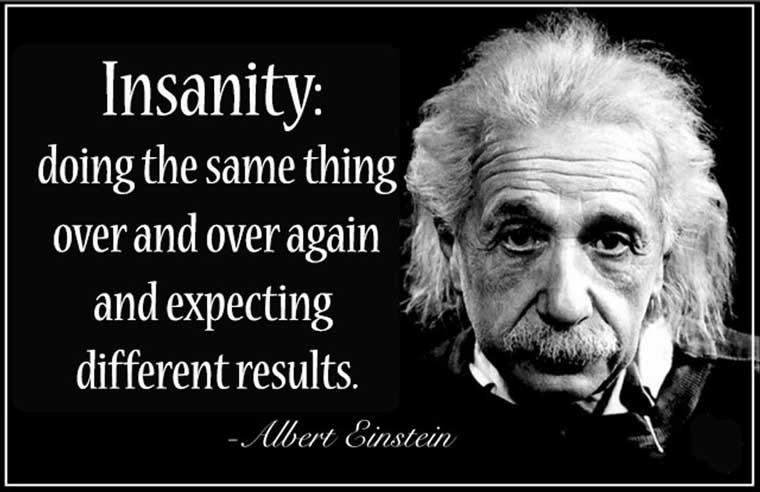 At some point we need to stop and realize that traditional dieting just doesn’t work. It’s proven itself to be a failure. Still, each new diet offers a little bit of hope that it will be different from the others. That’s why it’s so easy to fall back into the dieting trap:

“Maybe this one is different from all the others?”

It’s a nice thought, but reality is, most diets have similarly poor results.

Right now you may be thinking, “But I know someone who lost weight on a diet!”

That’s true. A very small percentage of people do lose weight through dieting, but even fewer keep that weight off.

Just take a look at the image below that tracks the weight of contestants on a popular weight-loss TV show. Pay special attention to the gray lines in the background — weight goes down temporarily before springing back up, often beyond where the person initially began! 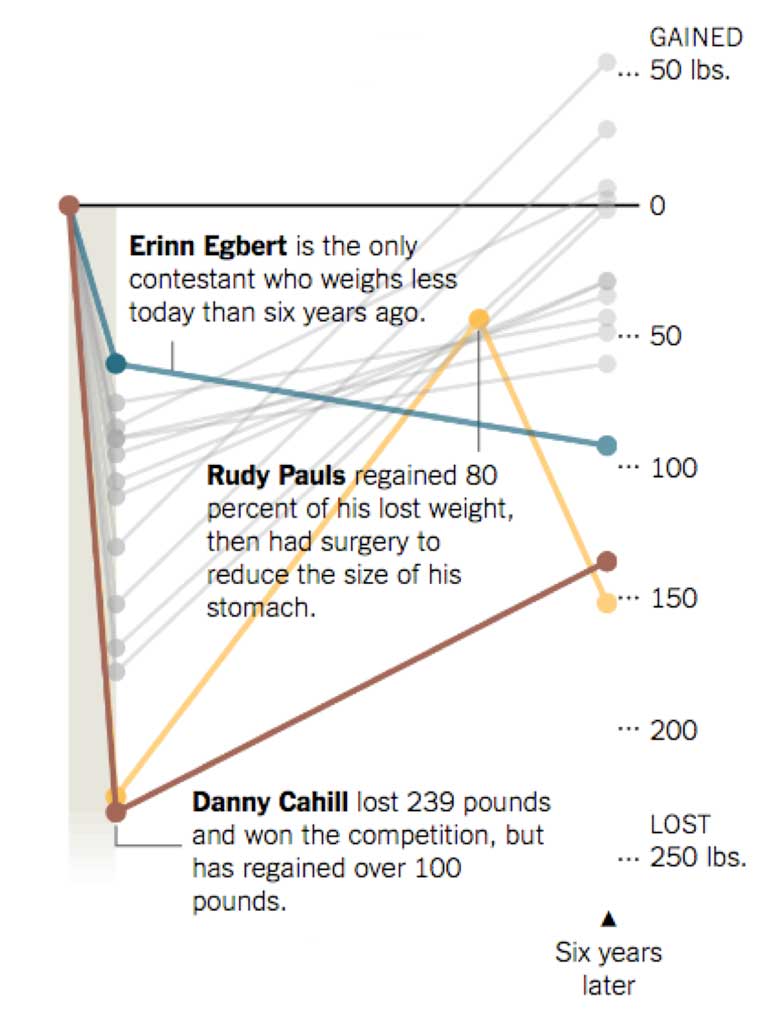 If you’re considering a diet right now, it’s worth asking yourself, “Do I think that this diet will be a long-term solution for me?”

If you’re honest with yourself, it’s unlikely that a diet is going to provide the long-term changes you want and deserve.

3. Dieting Causes You to Eat More

Most people associate dieting with eating less. That makes sense since fewer calories eaten seems like a great path to losing weight.

Here’s the problem though: Dieting can be VERY stressful. Not only is it stressful physically to make dramatic shifts in the food you use to fuel your body, but it’s also very stressful psychologically and emotionally.

If you’ve dieted in the past, you know this to be true. And, all this added stress actually produces the exact opposite effect you were likely hoping to achieve.

Increased stress decreases your “I’m full” hormone called leptin. It’s as if you lose your shut-off switch. You could eat and eat without feeling full, so guess what happens? You eat!

4. Dieting Makes It Harder for Your Body to Burn Fat

If I haven’t given you enough reasons to back away from dieting altogether, here’s one more: Dieting can kill your body’s metabolism.

Not only has it been shown that eating too little will cause your body to conserve energy through fat-storage, but the wrong approach to dieting can lead to weight-loss through muscle atrophy (i.e. your body loses weight by reducing your muscle mass, NOT your fat mass).

As a result, the scale number goes down temporarily, but then quickly plateaus or bounces back up due to your sluggish metabolism. 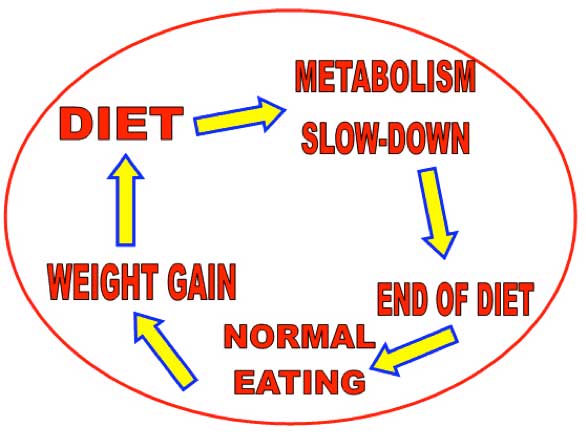 This can be especially scary for dieters because they may have seen a glimpse of “success.” Their weight may have actually dropped — even though we know it wasn’t a healthy drop.

It’s not unfathomable to think, “Well, I lost 5 pounds on this diet, so I guess I just need to try even harder.”

Eventually, this sort of dieting is doomed to fail, and you will be left with a broken metabolism that will likely lead to quick weight regain.

If Diets Don’t Work, What Does?

If you’ve read this far and are feeling pretty hopeless, I don’t blame you. If diets aren’t the solution for weight-loss, what is?

There is only one way to really lose weight for the long-term: You must change your habitual behavior.

Think back to the definition of a diet: It’s a “a special course of food to which one restricts oneself, either to lose weight or for medical reasons.”

If you are constantly restricting yourself or continually forcing yourself (as could be the case with exercise), eventually you will burn out. This “brute force” approach will never work.

But do you know what does work?

Slowing adopting new behaviors, one at a time, so that they become habitual, not forced. I know this isn’t a sexy solution, but it’s the truth.

I’ve worked with thousands of clients who have seen success by ditching diets in favor of building healthy habits. Want to give it a try?

Here’s where I recommend you begin:

1. Choose just one step to work on right now. For example …

2. Become a master at your one thing. Forget everything else you’ve learned about dieting or healthy eating. Simply focus on your one goal for at least four weeks. Once you feel confident that this new habit is actually a habit (you’re not “brute forcing” it), then it’s time to move onto your next “one thing” to tackle.

3. Get accountable with as many people as possible. I’m going to be straight up with you here … This baby-steps approach isn’t likely going to help you drop 20 pounds in a month. The results will come, but they may be slower than you’d like.

That’s why accountability is so crucial. If you’re really doing this for the long-term, you’ll need others to remind you of that commitment. It can be so tempting to jump back on the dieting bandwagon when you hear about the latest and greatest diet plan. Please resist! Ask your friends to keep you in check.

So, now that you’re steering clear from diets, what’s your one next step going to be? Want more help and a plan that is all about building habits with loads of self love and support? Get on the waitlist for the next 10 in 4 Challenge! —Dave