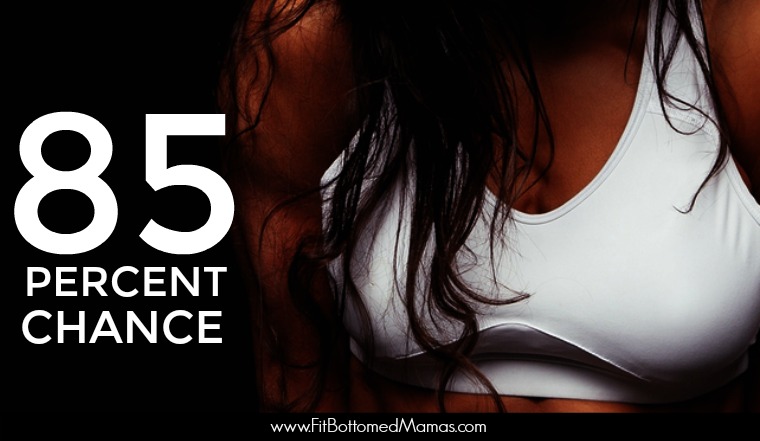 Recently my doctor called to tell me that the MRI I had done for breast cancer screening had found something. It was small and possibly due to hormone changes from weaning, but it was concerning enough that it required a closer look and possibly a biopsy. The MRI was done on a Monday and the first appointment they had available was the following Monday — an eternity when you’re sitting there thinking you might have cancer. It’s a lot of time to sit and think. And think. And think.

My risk for cancer is high. I found out I was positive for the breast cancer gene (also known as BRCA) in 2008. I was tested for the gene partly because of my ancestry, but mainly because of a deep family history of cancer. I’ve lived with this knowledge since, but never really let it affect me until now. It just seemed like a fact — like the sky is blue and I have the breast cancer gene.

For a number of years, doctors talked at me about options I had with screening and eventually a preventative double mastectomy. I nodded along with them: “Yeah, yeah. Sounds good.” I guess, naively, I always thought that I would beat cancer to the punch. That I could move along on my own timeline and that cancer was like an obedient, lovable lap dog. But with this current scare, I realize cancer is no lap dog and it is not going to wait until I am ready.

I am a mom now, which has changed my attitude toward preventive care. When I was single, playing the, “Hey cancer, catch me if you can!” game didn’t seem so risky. But now? My biggest fear is leaving my children motherless.

But that’s not my sole concern. Even cancer that is caught early still requires chemotherapy and radiation — and, frankly, I don’t have time for that. Could I really squeeze it in between naps and driving to preschool or gymnastics? I have to shop at five different stores just to get our essential items.

This recent screening put fear on my radar — a fear that maybe should have been there before, but wasn’t. Having the breast cancer gene means I have up to an 85 percent chance of developing breast cancer — seven times higher than the general population. Let’s put that in perspective, shall we?

If you had an 85 percent chance of winning the lottery, you’d buy a ticket.

If there was an 85 percent chance of rain, you would lug around an umbrella.

I have an 85 percent chance of getting breast cancer, but I can virtually eliminate my risk by removing my breasts proactively. So should I?

Yes, surgery is still hard — and I have young kids, which makes recovery even harder. But is it harder than cancer? I’ll be 34 at the end of the month. My mom was in her 40s when she got cancer. I was 11 at the time, and I can still recall images of her driving down the street, one hand on the wheel and the other pulling out clumps of hair.

Now, it turns out that MRI came back fine, thankfully. But it still has really given me something to think about.

What would you do? —Julie