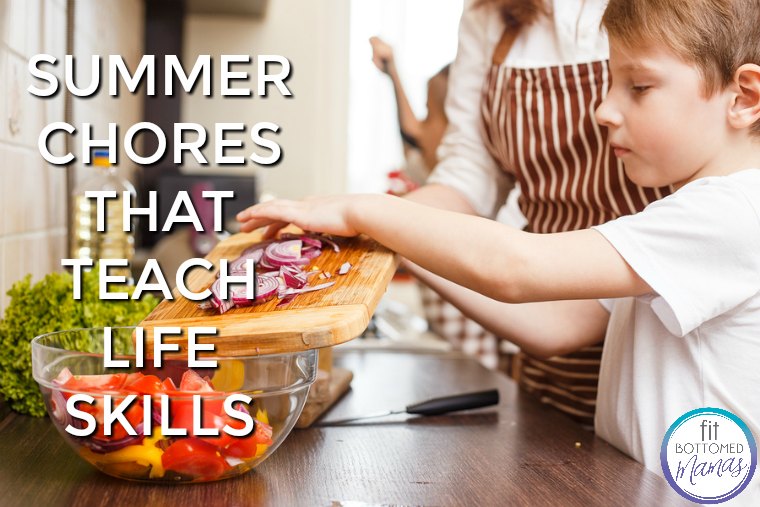 When I was in middle school, we had a class called Life Skills. It was more or less Home Ec, if memory serves — very basic baking, a little sewing (or, in my case, faking it with a hot glue gun), and, also in my case, so much complaining.

(I had a pretty strong feminist streak already at that age, and I saw this class as society’s way of forcing me into a life of domesticity and homemaking rather than becoming a professional basketball player/movie star/lawyer like I planned. Never mind the fact that the class was co-ed.)

As I grew up, I realized that maybe I should’ve taken advantage of the opportunity to learn some of those skills in a low-risk atmosphere. Which is why, when I saw a conversation between a couple of my awesome mama friends on Facebook about ways they use the summer as an opportunity to teach their kids valuable life skills, I was super intrigued and wanted to learn more — and asked my friend if I could share her tips with you.

Stefania Pomponi has never been the kind of parent who feels like every minute of her kids’ days need to be filled with activity — largely because her childhood was not like that. So, when her two oldest were around 9 and 11 years old, instead of sending them to every camp imaginable all summer long, she started encouraging them to develop critical life skills. Here are a few of the skills her girls have learned over the years — as well as Stefania’s recommendations based on her family’s experience.

Skills to Teach (and the Chores that Teach Them)

Handling money: Task them with dropping off and picking up clothes at the dry cleaner. It’s a simple transaction, but they’ll learn to interact with the clerk, pay and wait for change.

Paying attention to labels and measurements: Stefania’s girls learned to shop for basic necessities at the grocery store early on. “I’d include things like ‘a pound of apples,’ so they have to know what that looks like,” she said. Plus, it’s another good lesson in being responsible for a sum of money, not to mention sticking to a list and following instructions.

Finding their way around: For Stefania’s kids, the local library was a safe bike ride away, but it wasn’t a straight shot. “They used Google Maps or another navigation app to get there, and it really helped them learn where things were in our town. And that chore came with a bonus — all on their own, they discovered a free shuttle in our town, which they can now use to get to school or to meet their friends for a bubble tea.”

Self confidence: Making their own appointments for haircuts — and then getting themselves to and from those appointments — has taught the girls a number of valuable lessons. Aside from the basic responsibility of making an appointment and showing up on time (which is a skill some adults I know could stand to learn), choosing how they want their hair cut gives them both some added autonomy and the responsibility of speaking up if they’re unhappy with a result. “Advocate for yourself!” said Stefania.

Following detailed instructions: The post office is pretty foreign territory for a lot of kids, as Stefania learned when she sent her daughter to mail an item. “I sent her to the post office with the item to mail and told her to get a mailer. Well, she did — and then she brought it all back home. It just never occurred to her that the post office was both the place to get the mailer and where she needed to send it out,” she laughed, adding that it’s important to remember that most kids are very literal, so it’s on you to be clear and detailed in your instructions.

Meal prep and cooking: If your child has an interest in food, cultivate it! Stefania has her daughters select recipes from cookbooks or online, prep and make the meals. Of course, if your child is just learning her way around the kitchen, there’s nothing wrong with lending a hand, but try letting her take the lead.

Other Things to Take into Consideration

And that leads us to a few other safety tips, tricks and other things to consider.

You know what your kid is up for. Not every 9-year-old is going to be mature enough to tackle a meal or handle even a simple financial transaction alone. Some have innate street smarts; others truly don’t. And that’s okay — each child is different, and as the parent, you know what your kid is up for. The idea is to allow them to experience things that might be a little uncomfortable, but not unsafe — so always use your best judgement regarding your child, your neighborhood, and your individual situation.

Consider how independent your child is already. “I think a lot of children of divorce become more independent earlier because they have to quickly adjust to going from one home to another — they have to prepare all their school stuff, pack what they need for sports,” said Stefania, who is a single mom who co-parents her children with their father. That’s also part of the reason her girls had phones at an earlier age than some kids — it’s sometimes easier to communicate if it’s not necessary to go through the other parent.

Numbers matter. Another key point that made these chores doable for Stefania’s children? “There were always two of them,” she said. “Some parents might not be comfortable sending their 9-year-old on the shuttle, but my girls were never alone.”

Set up some rules. She also has a few rules that are always followed. “They have to always have their phone tracker on, so as they’re biking to the library, I can see exactly where they’re going from my phone,” Stefania said. “And they have to text me as soon as they arrive somewhere and when they’re about to leave.”

I don’t know about you, but I found this just fascinating. Just about 10 years ago I had a TERRIBLE haircut and sat there quietly, paid, tipped and immediately called another salon so I could go get it fixed. I could’ve really used that lesson in advocating for myself!

Let’s play a fun game. What’s the life skill you wish you’d learned at an earlier age — and why? I really wish I’d bothered to learn to cook when I was in high school. Animal crackers and PB&J did not make for the most nutritious first year or two of college. —Kristen