My cheatsheet … I’m an athlete not a math-lete.

This year, for the first time, I joined my CrossFit community at CrossFit Become in completing Murph.

If you’re not familiar, “Murph” is one of CrossFit’s hero WODs — intentionally challenging workouts each named for fallen soldiers to honor their sacrifice in defense of our freedom. Murph is performed by CrossFitters around the world on Memorial Day weekend.

This WOD is named for Navy Lieutenant Michael P. Murphy who was killed in action at age 29 on June 28th, 2005, in Afghanistan during a reconnaissance mission. Lt. Murphy was later posthumously awarded the Congressional Medal of Honor for his courageous and selfless acts which ultimately led to the recovery of the one surviving member of his SEAL team and the remains of those who were lost on that day. The story of his team is portrayed in the movie “Lone Survivor”. 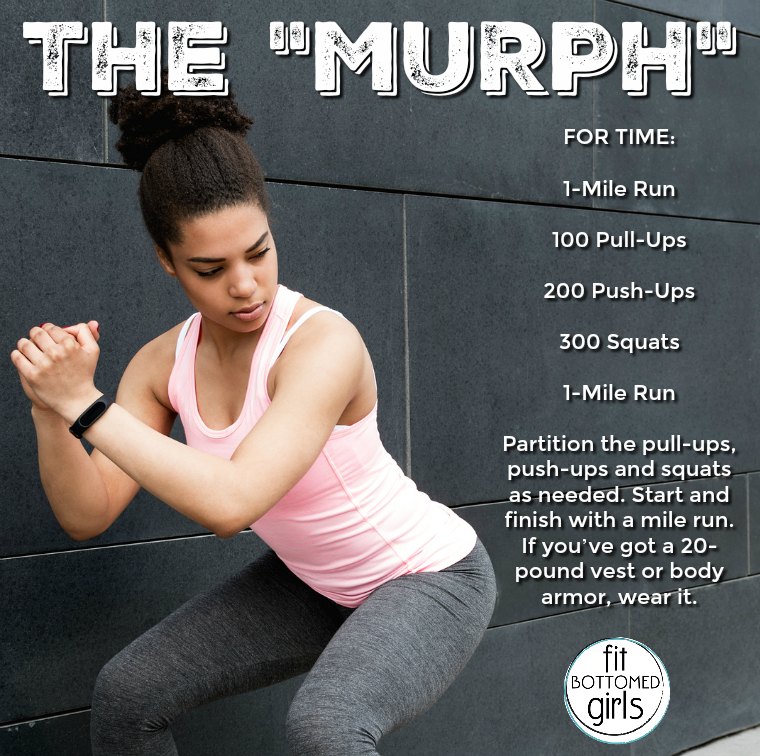 As I mentioned earlier, hero WODs are intentionally very tough and as you can tell from the write-up above, this one’s no different. This type of workout is known as a “chipper” in CrossFit — meaning that the reps are high and you “chip” away at it. It’s all about patience, determination and grinding it out.

There are many ways to attack this WOD. Many athletes do the three bodyweight movements in mini-sets, specifically 20 sets of 5 pull-ups, 10 push-ups and 15 squats (the rep scheme of the benchmark WOD “Cindy”).

I opted to attack each set in sequence rather than breaking it up into mini-sets. I rationalized that decision like this: I expected the pull-ups to be the hardest for me, followed by the push-ups, but I wasn’t worried at all about the squats. So it made logical sense to me at the time to knock out the most problematic movements first so that the WOD got easier for me as I got more and more fatigued. But, that’s not really the way it played out.

First and foremost, I didn’t wear the weighted vest — chuck that in the “Goals for Next Year” bucket. My first mile was pretty quick, then I took a couple of breaths before diving right into the pull-ups. I made it through the first 65 and then realized I needed to change up my game plan.

At that point, I was only able to bang out a few at a time and the time it took to recover enough to get a few more reps was killing me — especially since I had a one-hour time cap because I was coaching the second heat of Murph. My new plan was to stick with the pull-ups until just before muscle failure, then bang out a few push-ups just to keep the count going so I wasn’t killing so much time just standing around.

Before I knew it, the part I dreaded the most was over and I was on to the push-ups — which ended up being the real hard part. Now, I’m pretty strong with push-ups so I really wasn’t expecting it to suck as bad as it did — but it turns out, 200 push-ups is a lot of work.

I was pretty solid until around my 90th push-up, then the breaks I needed to take to gather arm strength got longer and I was regretting not breaking it up into small sets and trying to plow through them in sequence. It was a very long, slow march to 200 as I sprinkled a few sets of squats in there to keep the rep count rolling. Words cannot express how happy I was to be done with the push-ups.

From there, it was fast and furious plowing through the squats, and I was out the door for the final mile. I returned exhausted but feeling really accomplished with a time just under 55 minutes.

Would I do this WOD again? Absolutely (albeit with a very different strategy). As with all chipper workouts, it’s really easy to get overwhelmed by the shear number of reps still remaining. But every rep is another step closer to completion. You’ve just gotta stay focused and keep moving. In that way, it’s a lot like life.

And the fact that this WOD honors Lt. Murphy and all the brave service members who selflessly defend our freedom and safety made the work so totally worth it. I consider it a privilege to honor them in this way and I look forward to doing it again next year.