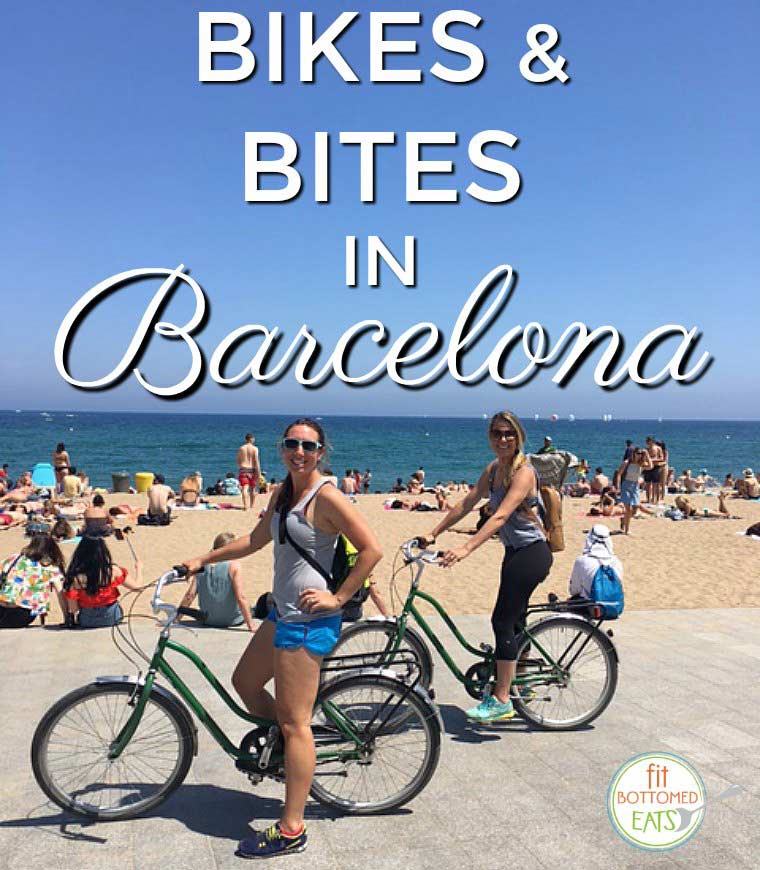 Barcelona, the capital of Spain’s Catalonia region, is one of the most visited cities in Europe. Its modernist architecture combined with endless eating and drinking options in a beachside city make a perfect combination for a long weekend. 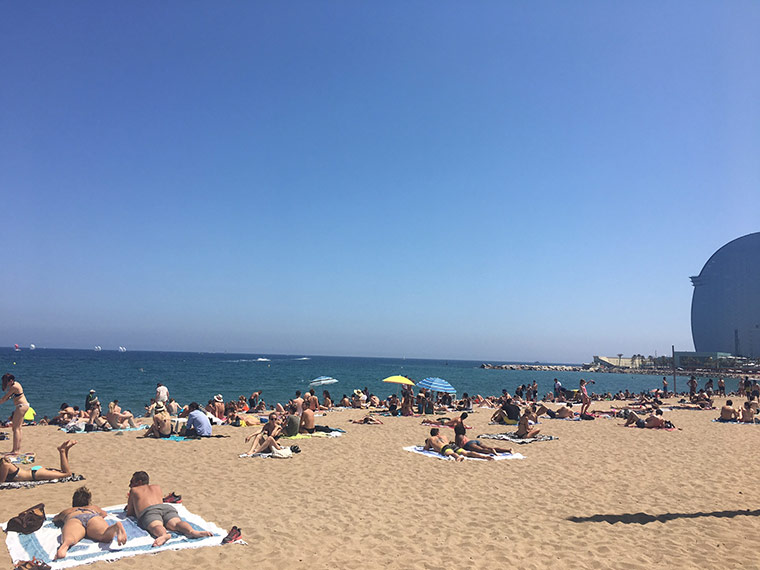 I spent my weekend in Barcelona doing a proper amount of touring as well as a triathlon. (I had to, you guys. It is an addiction.) My friends and I did a bike tour because Barcelona is pretty spread out. However, don’t feel like that’s your only option — the city has a great public transport system if you feel like exploring on your own (or if bikes aren’t your thing).
We started in the Gothic Quarter, which is the oldest part of the city. In fact, part of the old Roman wall of the city still stands.
Then we rode over to the Sagrada Familia, which is one of the most recognizable icons of the city. Designed by Catalan architect Antoni Gaudi, it is still not completed. 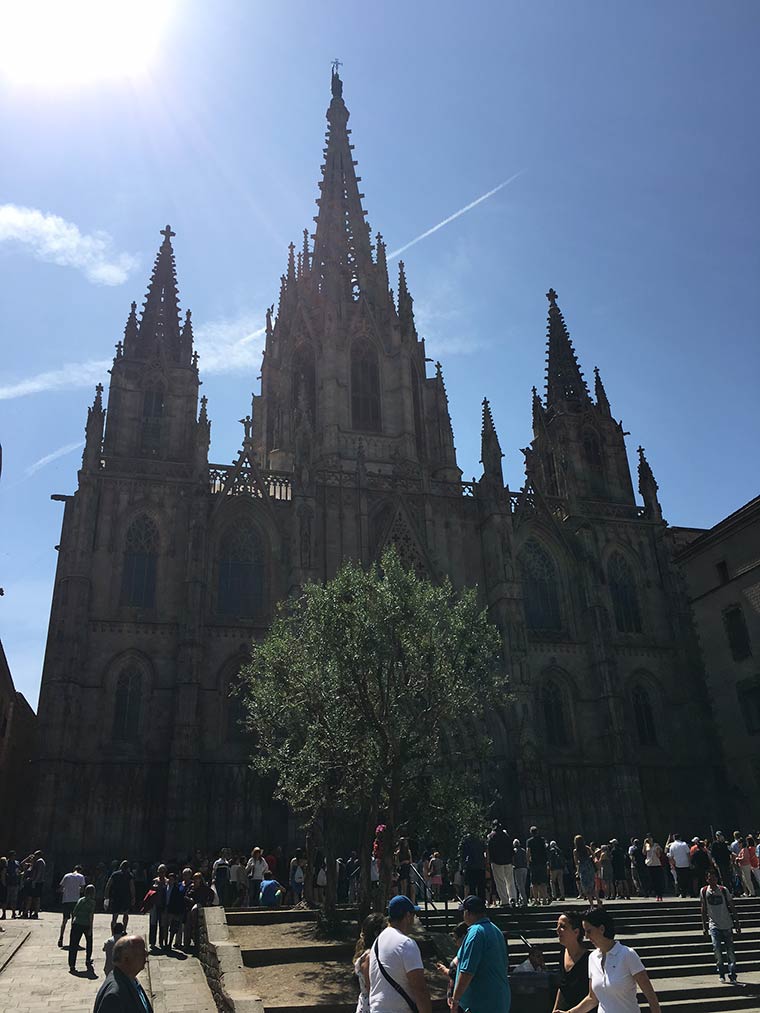 Barcelona’s beach front was revitalized in 1992 for the arrival of the Summer Olympics, and now is home to many restaurants, bars, runners, rollerbladers, walkers, sun bathers and tourists. Lunch at an open air restaurant along the boardwalk was delicious, and the cava sangria was on point.
Speaking of which, sangria is almost synonymous with Spain. Any variety you want — blanco, rojo, or cava (Spanish sparkling wine) — it’s available and almost certainly delicious. Wine, brandy, fruit, and maybe some soda water sit and combine to create a myriad of flavors in which every batch is different.
Pan con tomate (in Spanish), or pa am tomaquet in Catalan, is a traditional Catalonian tapa. Fresh bread, olive oil, garlic, salt and ripe tomatoes make for a light, refreshing appetizer. 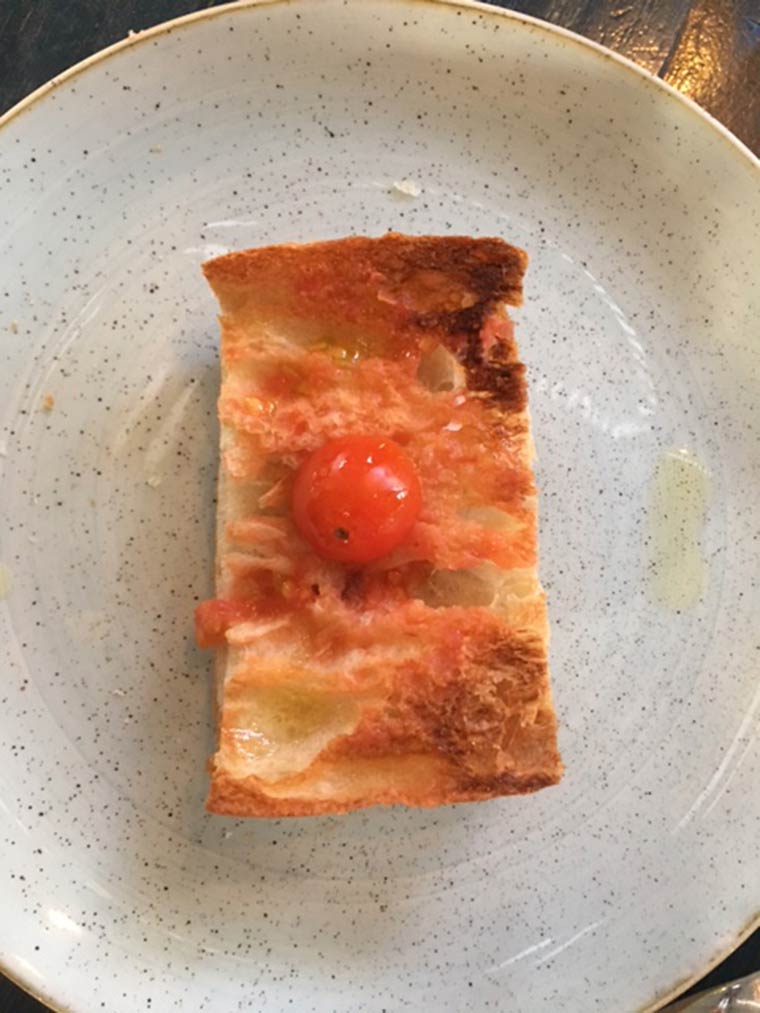 Ceviche. I mean, what else is there to say about fresh fish and seafood marinated perfectly while you are sitting on the beach watching the world go by? 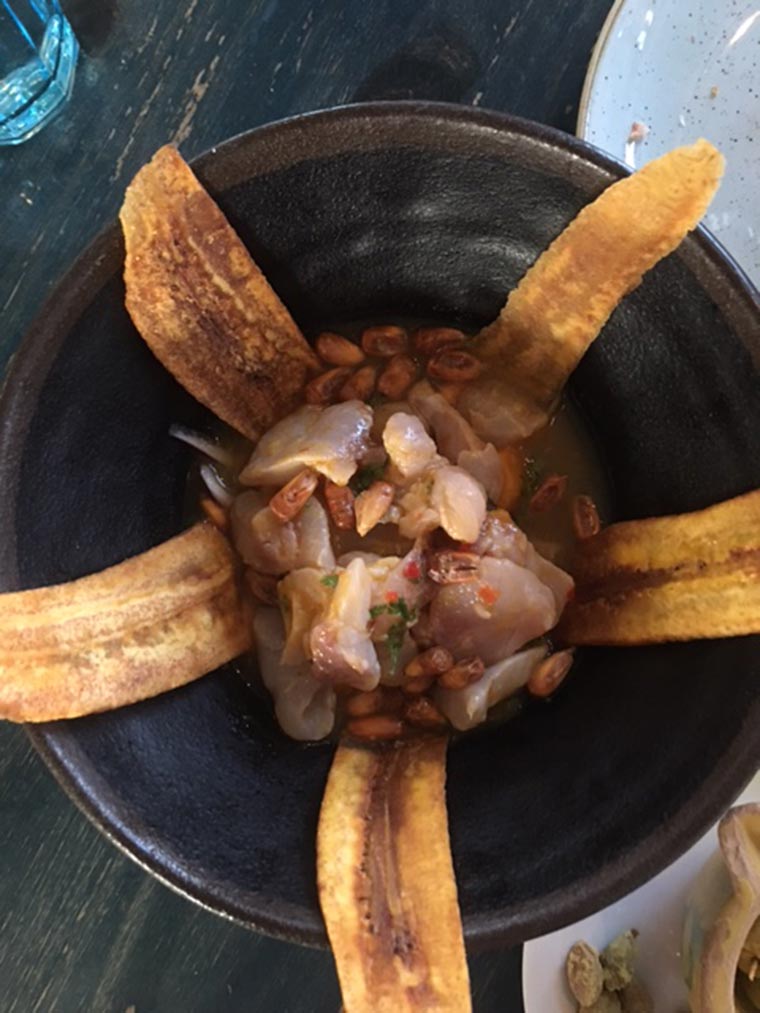 This recap would be incomplete without a mention of patatas bravas. Fried chunks of potatoes covered in olive oil, paprika, red pepper and vinegar, with a side of aioli? Yes, please, I would some more. Patatas bravas are a common tapas and restaurant dish all over Spain.
We ended our day with a trip up to Gaudi’s whimsical Park Güell to look out over the city to the Mediterranean sea. 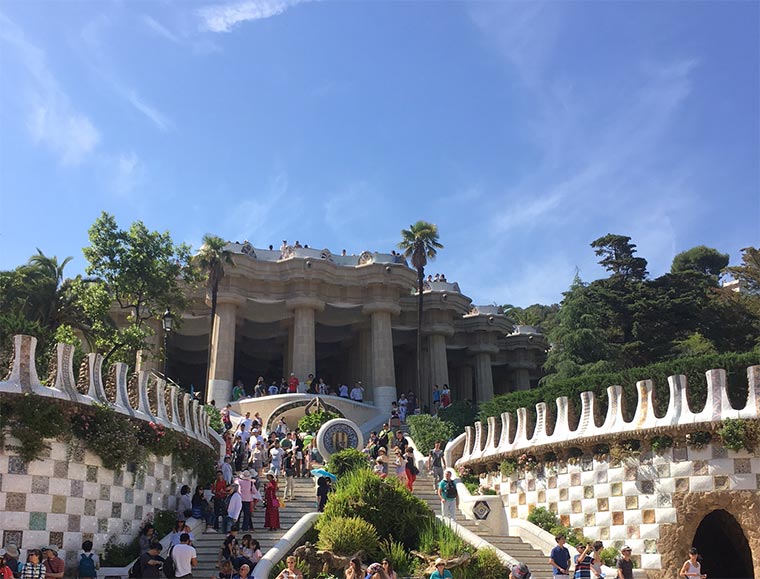 By Spanish dinner time (which is 10 PM at the earliest) our group was ready to eat everything and anything that might end up on the table. Lucky for us, an endless bowl of olives appeared with our sangria as we waited for our paella. 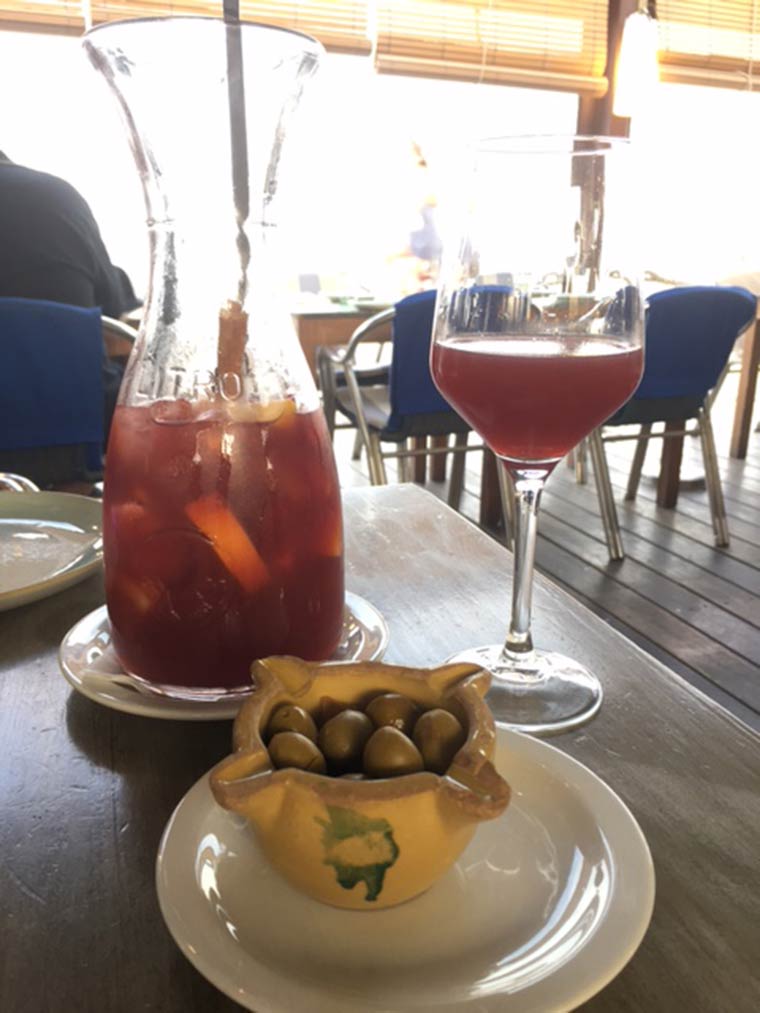 Those olives… ahhh. Spain grows about 300 types of olives, so the dish on the table is bound to have one that you like.
Paella traditionally hails from the Valencia region of Spain, but is it now found all over the country. The large shallow pan is meant to be eaten out of communally, while the bottom layer of rice crusted in the pan is a special treat. 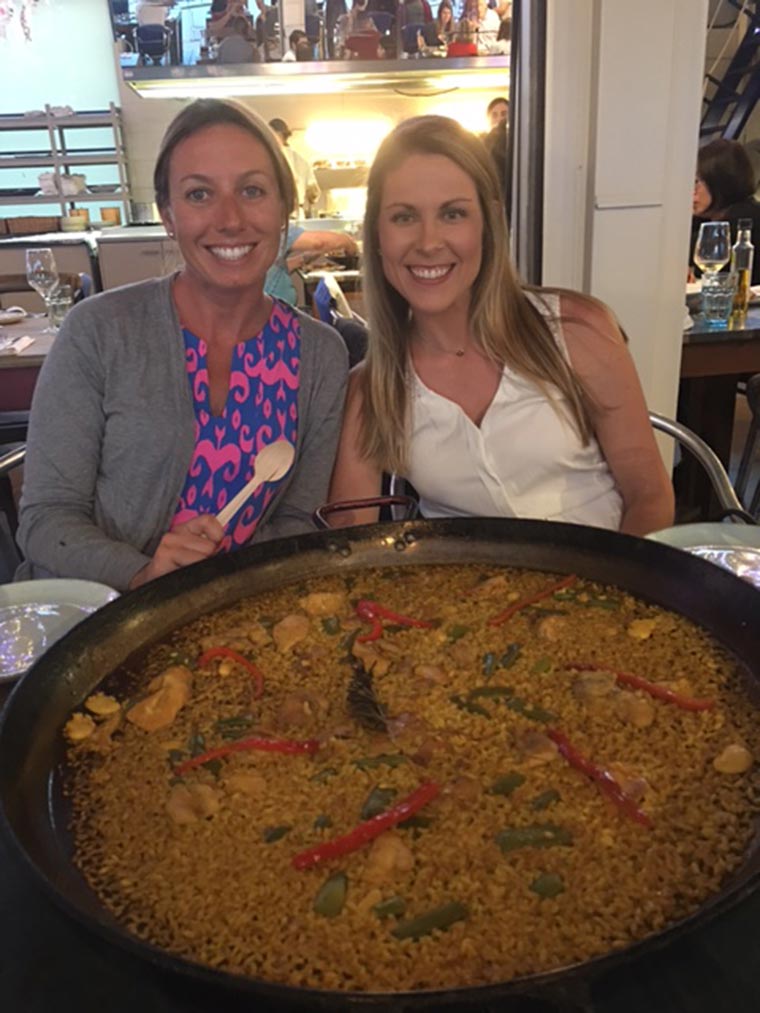 Valencian paella has chicken and rabbit, and no seafood, while the Catalonian version is usually full of seafood. Ours had seafood and the rice was perfectly tender. Another bonus of doing a triathlon while I was in Barcelona — the post-race paella feast!
Ever been to Barcelona? How did you get around … and, more importantly, what did you eat? —Cara
New Fitness
New Mamas
New Eats
New Zen
STAY IN THE KNOW
When new stuff happens, you'll be the first to know!

Add a comment Cancel reply
1 Comment
Jenn & Kristen
Diets don‘t work. We know because we‘ve been there.
Get the deets
STAY IN THE KNOW
When new stuff happens, you'll be the first to know!
Latest Offer
Working out at home
Get free strength, cardio, yoga, and meditation videos.
Try them
Podcast
Podcast Ep 137: That’s a Wrap!
Instagram
X