FBGs, welcome our newest contributor: Nichole Curran! Nichole is a thrill-seeking two-time Ironman triathlete and Ironman 70.3 World Championship qualifier, and today she’s sharing the new challenge she’s taking on — Pikes Peak Ascent and Marathon — and how she’s training for it even though she lives far from the mountains! 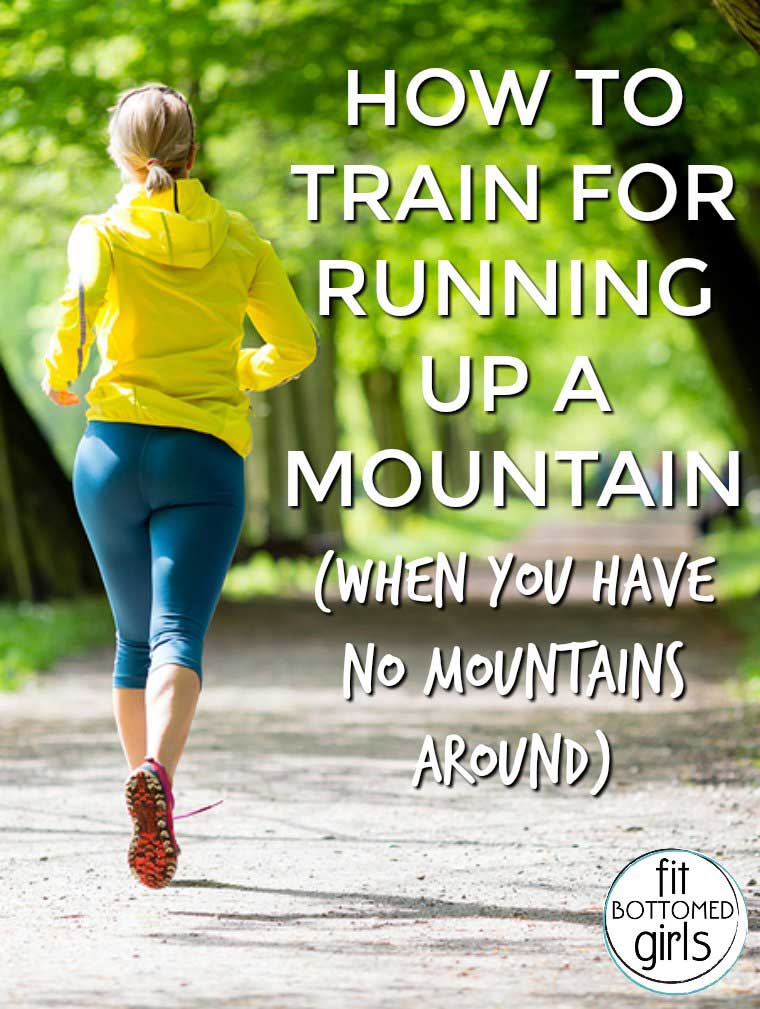 According to the Merriam-Webster Dictionary, flatland is defined as “a region in which the land is predominantly flat and lacks significant variation in elevation.”

Wiktionary breaks it down further, describing a flatlander as “a person who lives at low altitude (used by those living at higher altitudes).”

Now I may be mistaken, but this Kansas City girl thinks walking to the mailbox and back is quite the uphill climb … no?

So a flatlander I am.

Let’s Do Something Crazy

Apparently finishing two Ironmans and a handful of half Ironmans wasn’t enough. What’s a thrill-seeking, endurance-junkie, always-looking-for-the-next-big-challenge FBG to do next?

If you’re me, you find yourself out on a leisurely group trail run with your girls, talking about life, taking in nature, thinking about what you’re going to eat later, and then out comes: “Let’s run a up a mountain!”

A mountain? Where is such mountain?

This particular mountain is Pikes Peak, located just outside Colorado Springs, Colo. It’s the highest summit of the southern Front Range of the Rocky Mountains.

What could possibly be going on there? Only the toughest half marathon in America: Pikes Peak Ascent.

Halfmarathons.net breaks it down for us: “You’ll run literally up the side of a mountain at this race, which starts at 6,300 feet above sea level and climbs all the way to 14,115 feet.” A fourteener! “Temperatures at the start can rise to the 90s during the day, while runners might face near-freezing weather at the summit.”

Being a flatlander, how on earth do you train to run up a mountain? Raw answer: the best you can! Here are a few more tips …

1. Utilize any and every resource you have available. You know that friend who randomly has an altitude-training mask (yep, the one that makes you look like the evil Bain character on Batman)? Borrow it! 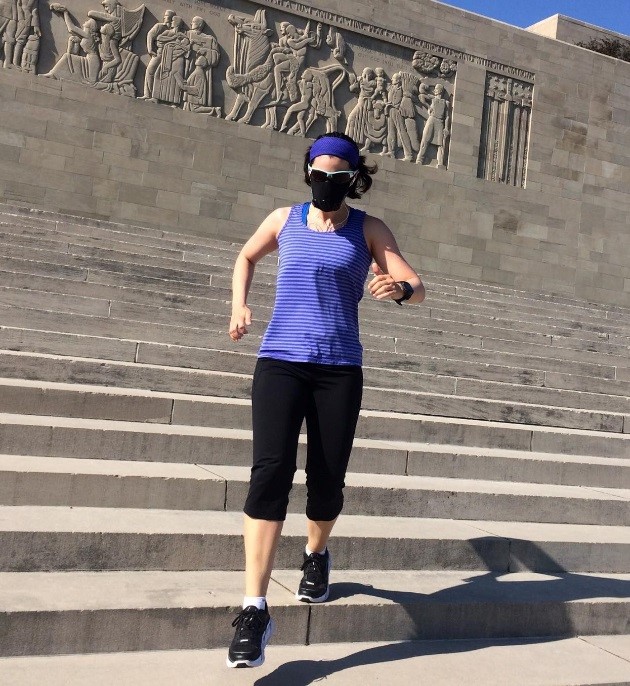 I’m pretty sure I gave many children nightmares, but a girl’s gotta do what a girl’s gotta do! Strap it on, turn up the altitude and go for it! This thing will literally leave you breathless. There were times it caused me to have minor panic attacks. ripping it off as quickly as I could. But you know what? I didn’t give up. I put it right back on and I went further the next round. Push yourself!

2. Train on stairs. How about those Rocky Balboa wanna-be stairs downtown? Run them … REPEATEDLY! Wake up those muscles that have been hibernating and climb your heart out! Want a more intense stair workout? Skip a step and stride! It’s a killer.

3. Hit the trails. Lots and lots of trails! Look down. Trails make you focus by eyeing each and every step. You never know when you’ll encounter a rock, tree root or animal(!). Hence, running trails trains you to be alert and aware. 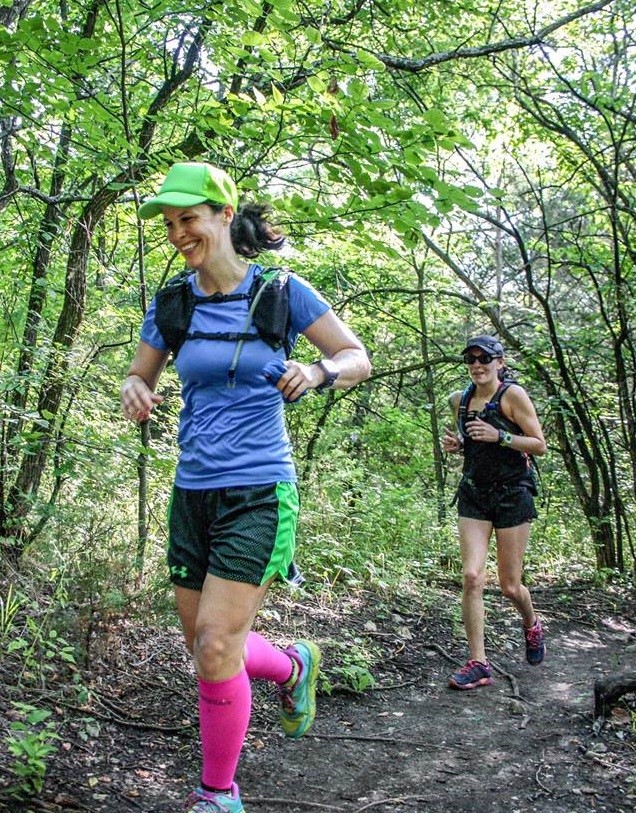 4. Stay safe. Safety first! Never run secluded trails alone. The buddy system doesn’t just keep you safe from other unsavory characters, but also, if you were to take a tumble or roll your ankle, you’d want the comfort of knowing someone was there to help.

5. Train in the heat. The temps are still hot. Take advantage! Lather up and (safely) get your heat training on. Check out this Runner’s World article for more.

7. Focus on mind over matter. I’d be lying if I said I wasn’t absolutely terrified to take on this beast of a race. I mean shaking-in-my-boots, wanna-run-away-and-hide kind of terrified. If there’s one thing I’ve learned throughout my years of racing, it’s all about mindset. Yes, it’s going to be hard. Yes, it’s going to hurt (like hell). Yes, I’m going to want to quit. BUT I didn’t come this far and train this hard for nothing. 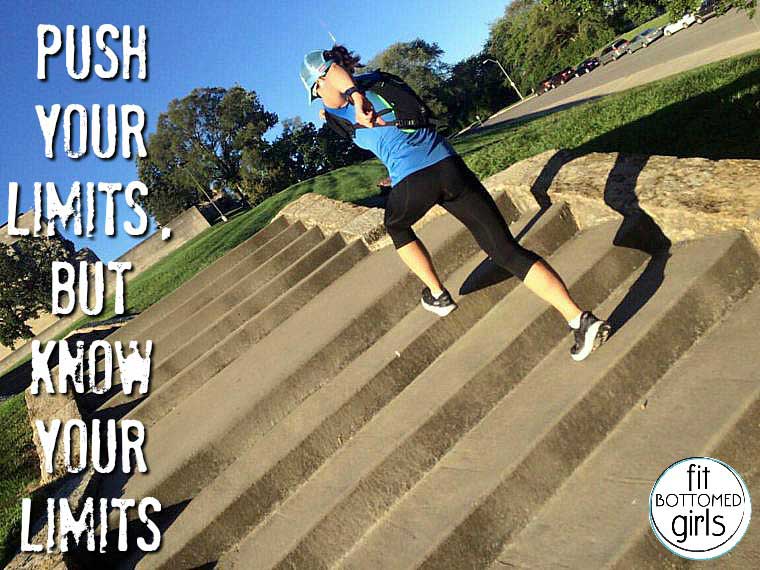 With that being said, put your go-getter attitude on, check your fears at the door and get it done! You have three options … give up, give in or give it all you got.

And stay tuned for the upcoming race recap … I can’t wait to share how the race goes! —Nichole

Add a comment Cancel reply
3 Comments
Just for You
Working out at home
Get free strength, cardio, yoga, and meditation videos.
Try them
STAY IN THE KNOW
When new stuff happens, you'll be the first to know!
About Us
Jenn and Kristen are passionate about letting women know they're more than a number on the scale.
Get the deets
Instagram
X