So you’ve finally decided to start yoga. You bought the Breathe Free tank, the Easy Touch sticky mat, and even the nontoxic spray because you know your new mat will need cleaning after all the yoga you’ll be doing.

But then you check the schedule at your local studio and you’re stuck. “Why are there so many different yoga classes?” you think, “and when did it get to be so complicated figuring out which class to attend?”

Well, since yoga began more than 5,000 years ago,  it has broken off into many branches based on different techniques and lineages. The styles of yoga are only one variable. Yoga is made up of eight different limbs, but when we think of the practice today we’re usually referring to asana. (Although some yoga styles do include other limbs like breath control and meditation.)

But back to the yoga schedule with all the different offerings. Your experience level, your goals and what type of mood you’re in will determine which style you’ll want to explore. Some practitioners bounce between styles in a week while others are more loyal to their specific practice. Here’s a breakdown of six yoga styles. 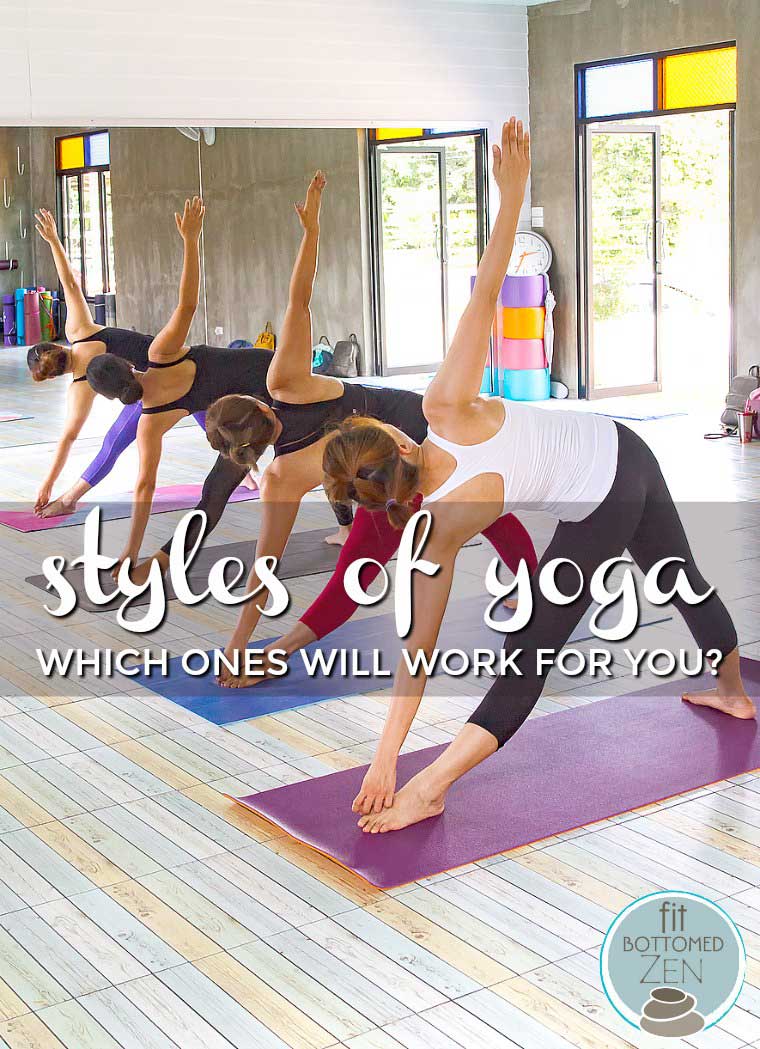 Most Western yoga falls under the Hatha umbrella, meaning it’s a physical practice with the intention to bring union to the mind and body. Usually a Hatha class is a good place to start for beginners as it tends to move gently between the basic poses.

Also known as a flow class, Vinyasa is a more intermediate to advanced level. While it can move quickly, the emphasis is on linking the breath to the movement. Sun Salutations are a popular Vinyasa sequence that many instructors choreograph into their class. Music will often accompany this style.

Created by BKS Iyengar, this style is all about precision. Props such as straps, blocks, bolsters and even chairs are used to support yogis as they work to find their best alignment. The class pace is usually slow and instruction oriented. People looking to create a solid foundation for the practice often gravitate toward this style.

When yogis are committed to one style, it’s often Ashtanga, a form of Vinyasa based on a set series developed by Pattabhi Jois. This style is not a casual practice — it’s rigorous and intense as it requires strength to build stamina. If you see Mysore on the schedule, this refers to the self practice — usually in the early mornings — where students go through the series on their own with an instructor walking around to provide support. Ashtanga is good for people who like a physical challenge and a sense of structure to their practice.

Many confuse Hot yoga with Bikram. But Bikram, a set of 26 poses practiced in a room temperature around 105 degrees, is actually a form of Hot yoga. Regular Hot yoga is not limited to the 26 poses of Bikram. You may discover Hot Flow or Hot Power at your studio. Regardless of what the Hot class is called, you can expect to sweat buckets, so you’ll need to drink tons of water. It’s a detoxifying experience.

If you ever hear words like juicy or delicious used to describe yoga, it’s probably for a Restorative class because the long-held postures are designed to provide total relaxation. Like Iyengar, Restorative relies on props to provide extra support — usually several at a time! So you could have a bolster under your knees, a strap around your thighs and two blocks behind your back. This is the class to take after a long week when your mind and body crave total rejuvenation.

Now that you’ve seen a breakdown of some of the styles of yoga, which ones would you like to try? —Elysha