Holy crap, this flatlander ran up a mountain! 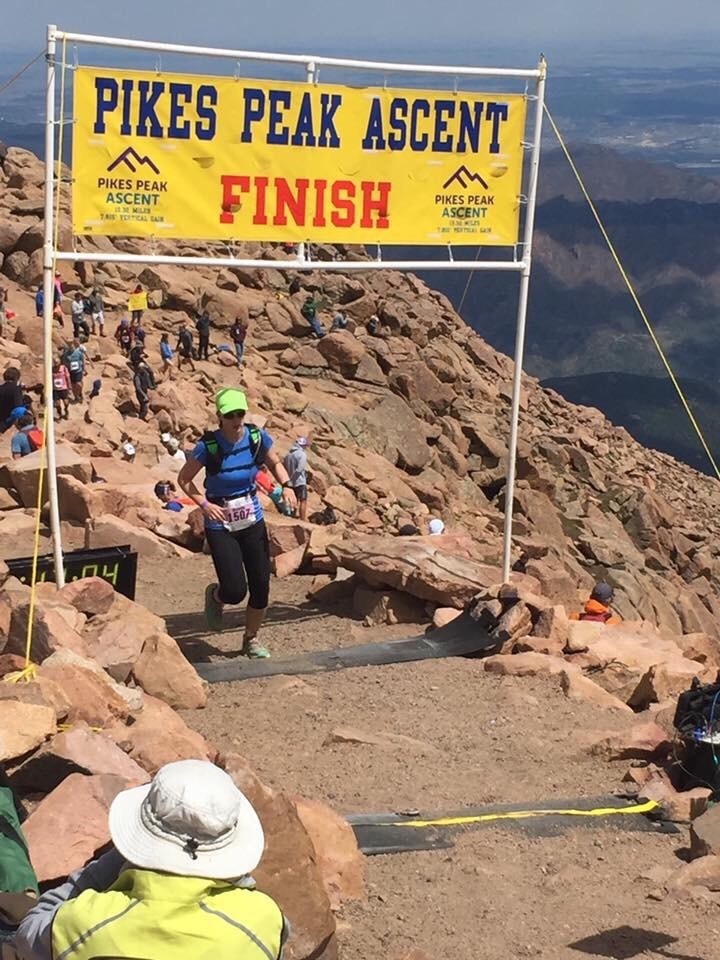 You’d think that the final moments captured in this picture were epic … and you’d be right. They were, 100 percent. That moment you trained sooo hard for … the sweat, the emotions, the anticipation. After all, I could hear the announcer starting at mile 9! That’s a long ass time considering mountain miles aren’t your typical road-mile pace. Longest mind game EVER.

Although a joyous moment, what you can’t see in the photo above is that the altitude had completely depleted me: my oxygen, my strength, my ability to think. Just lifting my leg was the most difficult task. All I wanted to do was lie down and close my eyes (this started at mile 8). But I wouldn’t allow it. I kept shaking my head to snap out of it, squeezing my hands to regain circulation and telling myself to put one foot in front of the other. I just tried to breathe in whatever I could, which was next to nothing. It was one of the most daunting challenges I’ve ever experienced. 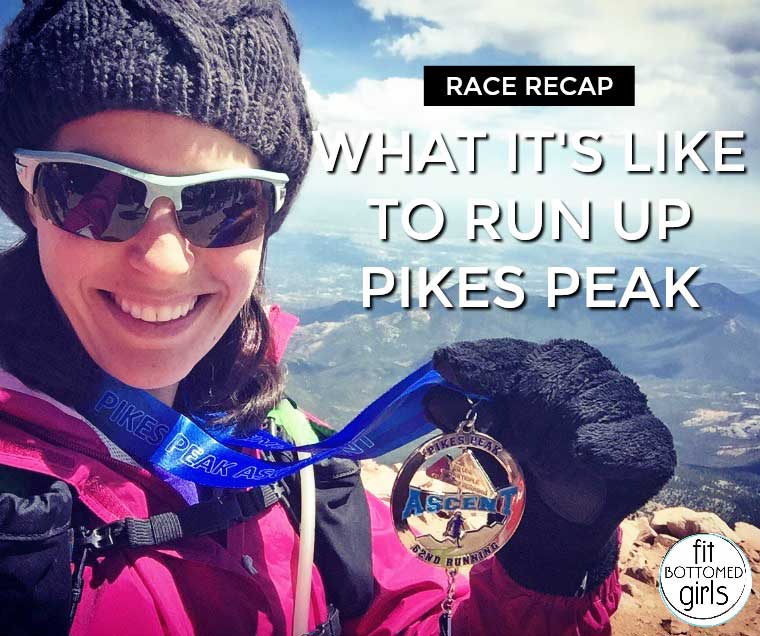 But enough about the end. Rewind! Let’s back this crazy train up to the beginning, shall we?

With the race being Saturday, it was recommended that I be in Colorado at least 48 hours before the race (that was, if I couldn’t be there two weeks prior to acclimate … which I couldn’t). Talk about jumping in feet first!

I managed to keep it together until I laid eyes on the massive peak I’d soon get in the ring with. Intimidation is an understatement when you’re staring down — I mean up — a 14,115-foot peak.

I anxiously arrived at the cutest little cottage I’d call home for the next few days. It was just a half mile from the start. Now what? I couldn’t sit still, so off to the expo I went. 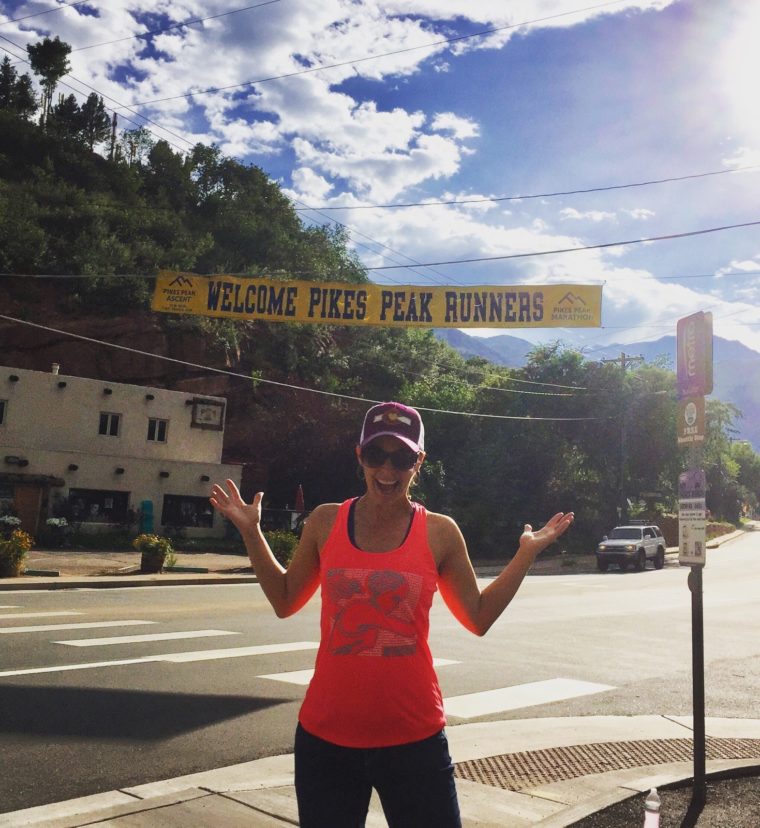 In the days before (why does that always sound so eerie?) … nothing really exciting went down. Just a couple of girlfriends hiking the Garden of the Gods, reading the day away and carbing up. (All you can eat spaghetti dinner? Yes, please.).

Gear prep was its own adventure. I had to pack light but smart. Mountain weather can shift at any given moment. It’s not uncommon to get caught in torrential rains or snow storms (in August!). As a result, I monitored the forecast like a hawk until the moment I fell asleep and immediately again upon waking. Race officials warned that if the weather turned and we didn’t have proper gear, they’d pull us. Heck, no. I didn’t come this far to let that happen!

Before I knew it, I was standing at the start line. Surprisingly, I felt really good. I had done the ritual porta potty line and felt light as a feather. (No shame here!) I hydrated beyond belief. In fact, I didn’t think it was physically possible to drink as much as I had.

Prior to the gun, I looked at my girls and said, “Don’t go out too fast. Pushing the jogging stroller, ladies!” They laughed, which eased the nerves for maybe a second and then 3, 2, 1 … BANG! We were off and running. 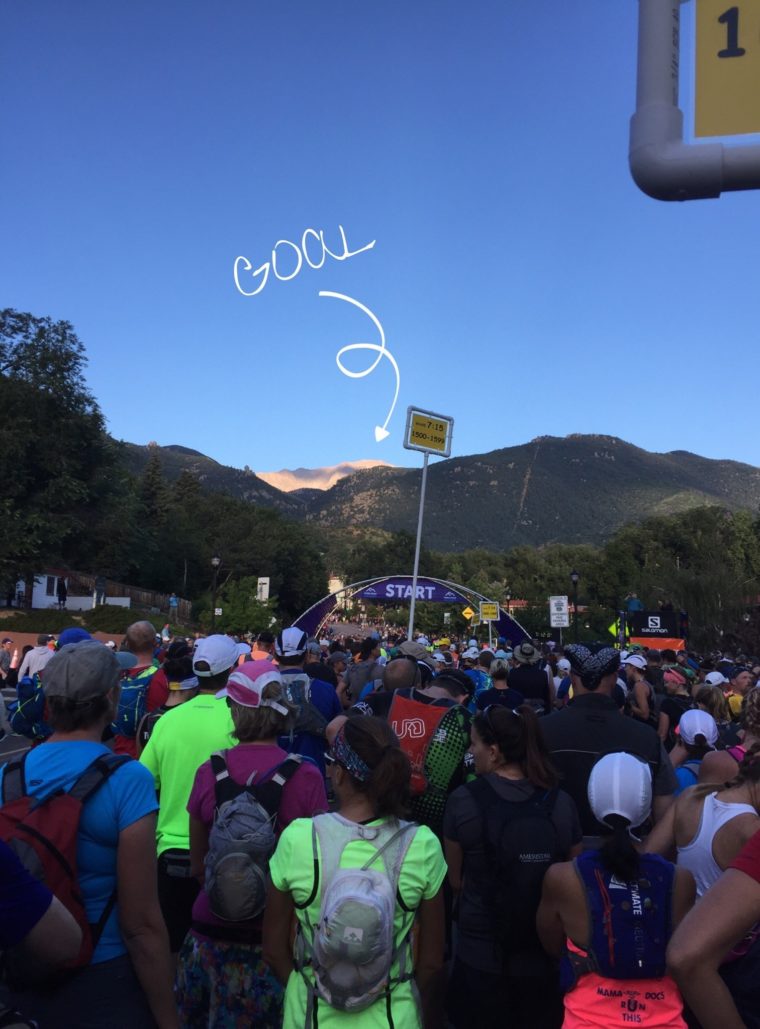 When you spend countless hours training together, of course you want to stay together. We even practiced finish-line poses (as if we really thought we’d have energy for that!). We stuck together pretty well through the city streets, but the moment we hit the narrow congested trailhead with 15-percent incline, we were forever separated. I couldn’t help but feel guilty as I quickly learned how to weave around others in order to pass. It was a constant “On your left!” The “I’ll never let go,” Titanic scene replayed in my head as I could no longer see my crew. However, I knew this crazy burst of energy wouldn’t last forever and I was determined to take advantage of it while I could. 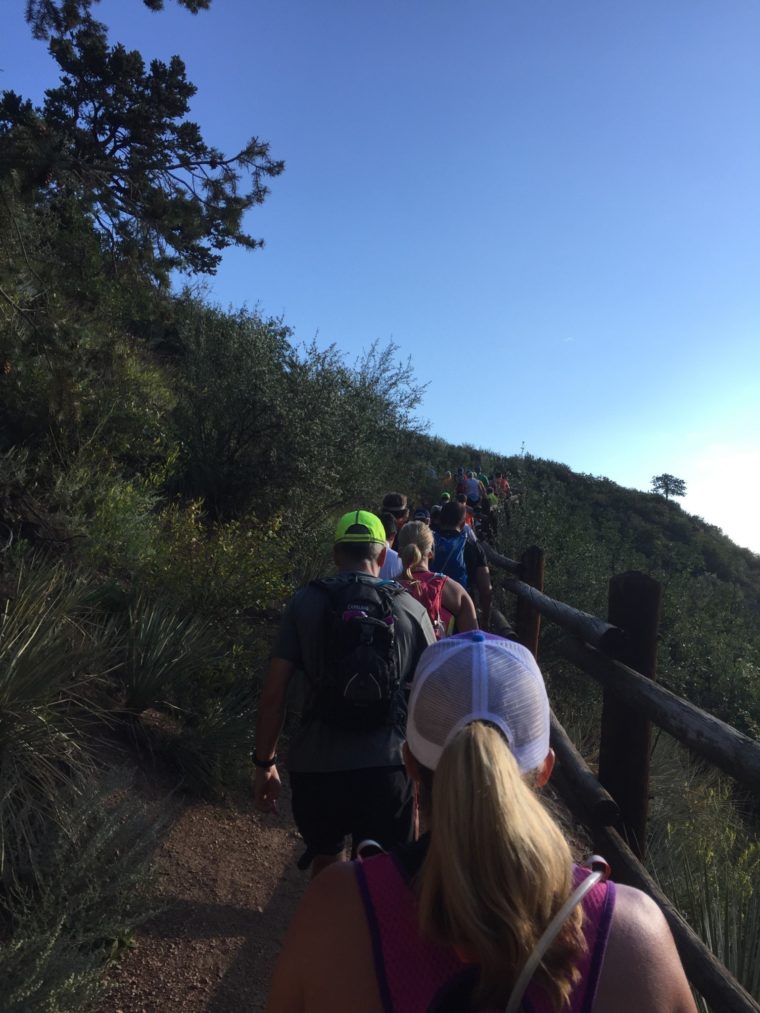 Surprisingly, I felt awesome when I reached the first cut-off point, Barr Camp (7.6 miles). HECK YEAH, I MADE IT! Shocked by my pace, I thought, “This is sooo much fun!” Note the smile in the photo … 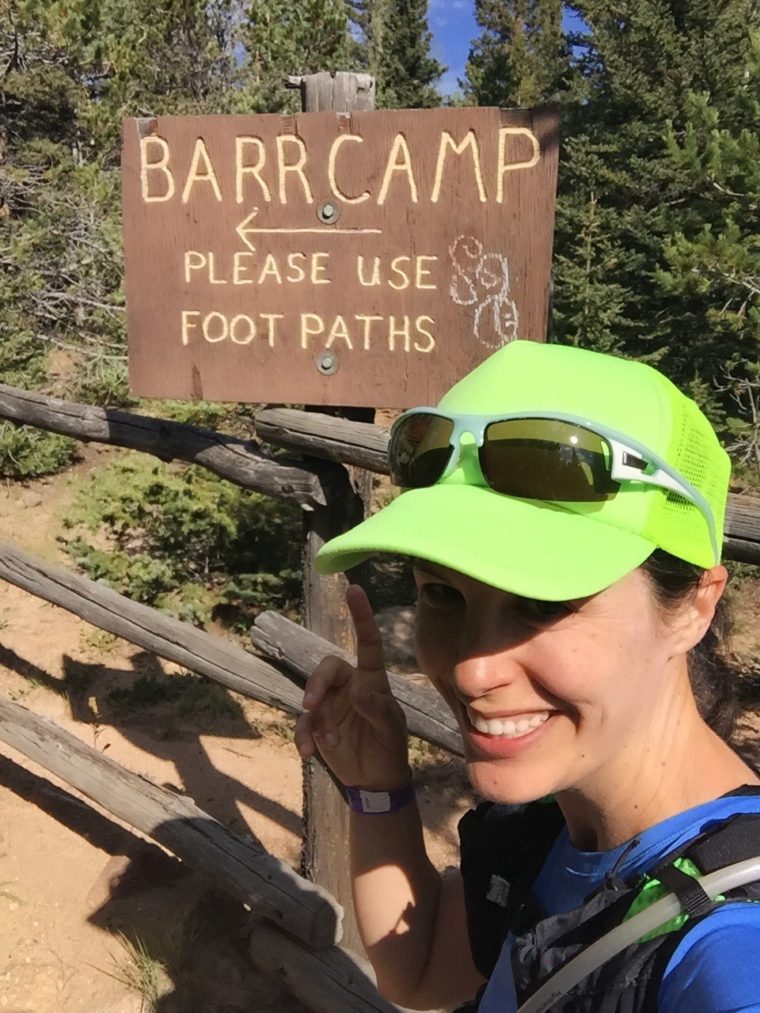 Little did I know that my pace and strong word choice of “fun” would be shorted lived. Things took a drastic turn from Barr Camp to A-Frame (second cut-off point, mile 10.2). The course got sooo steep and the air was crazy thin. I started to struggle taking in nutrition and hydrating. My lips were beyond dry (fail on packing that lip balm), I was lightheaded, and my fingers were swollen like sausages. 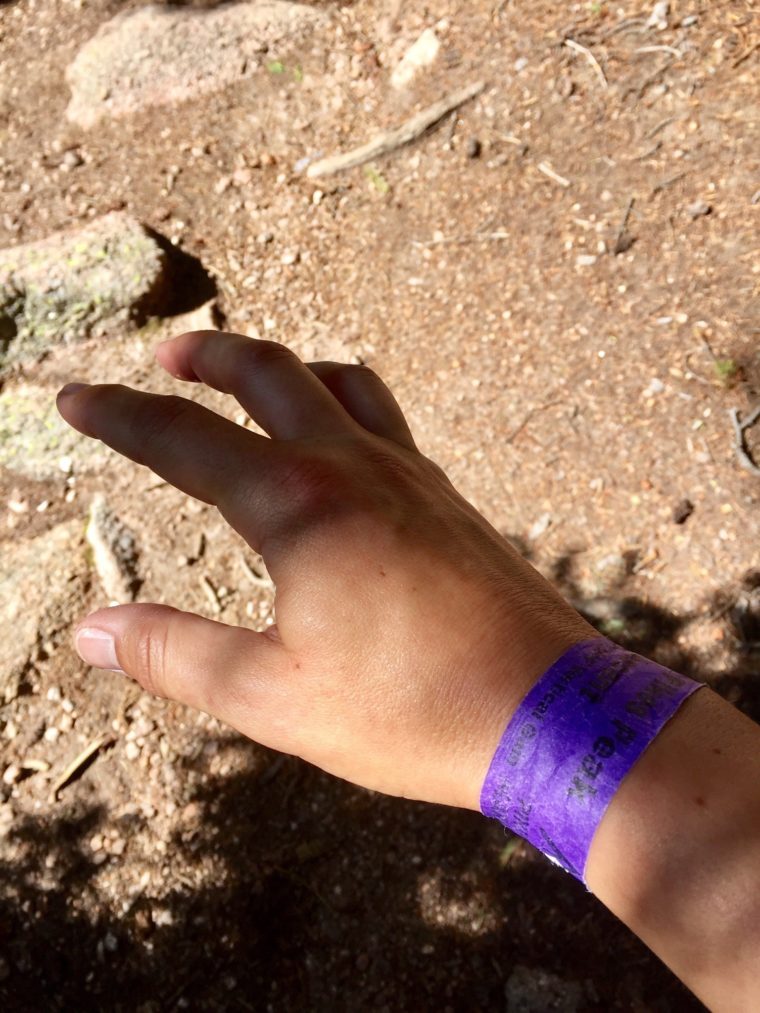 Yet I kept pushing forward. Mileage signs had disappeared. (Oh wait, I was just moving slower.) 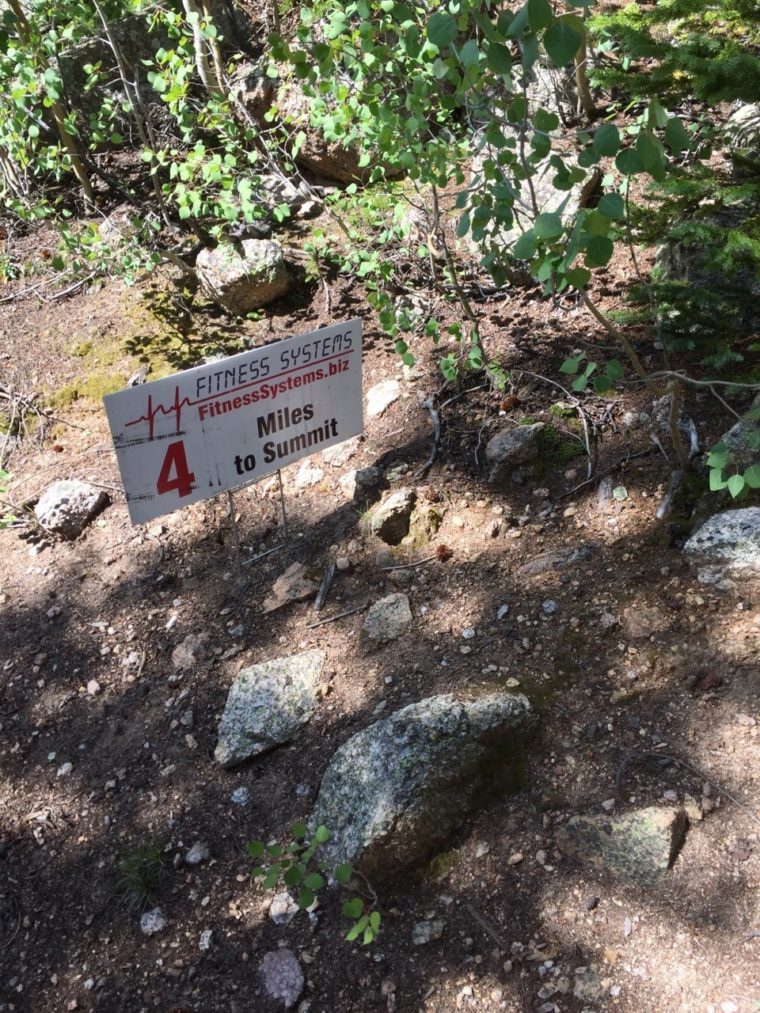 Where’d the trees go?! Did I miss A-Frame? Everything was a blur! The sun was beating down yet I was shivering. All I wanted to do was sleep. I have a whole new respect for those stories you hear about people falling asleep on the mountain and not waking up. It’s like there was a voice in my head encouraging me to just close my eyes and rest. Something to ponder … If nothing can live above tree line, how on earth are we expected to breathe?

When I saw the “3 Miles to Summit” sign I tried convincing myself that this  was like running a 5k. Whoa. Who was I kidding?! Switchback after switchback … and where in the hell did the air go? And then I remembered: yep, this was that 2,050-foot elevation gain everyone warned me about.

Decomposed rock with dirt and loose gravel combined with my inability to think straight made for an interesting wobble. It was a recipe for disaster, causing me to slip and slide everywhere. 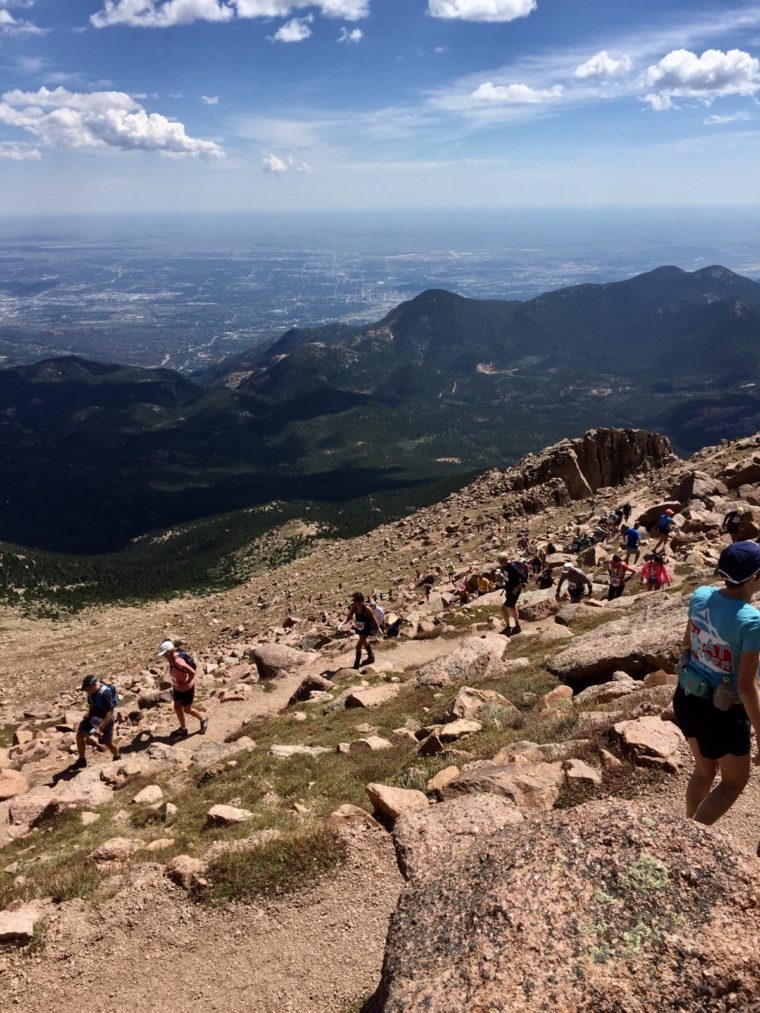 Athletes were nipping at my heels, but I couldn’t figure out why they weren’t passing. It was because they physically couldn’t. I wasn’t the only one suffering, after all. People were sleeping on rocks, cramping, hyperventilating, screaming … yes, screaming! I remember passing one girl leaning up against a rock holding her leg and yelling at the top of her lungs “I CAN’T MOVE IT!” I’d be lying if I said I wasn’t grateful to the individual ahead of me that stopped to assist, as physically and mentally, I don’t know if I could have. I couldn’t even speak. Thankfully there were search and rescue teams everywhere. Volunteers are amazing. Not only were they there to help, but also they were singing, cheering and even playing a finish-line rendition on a kazoo. (Think about how impressive that is with little to no air!) 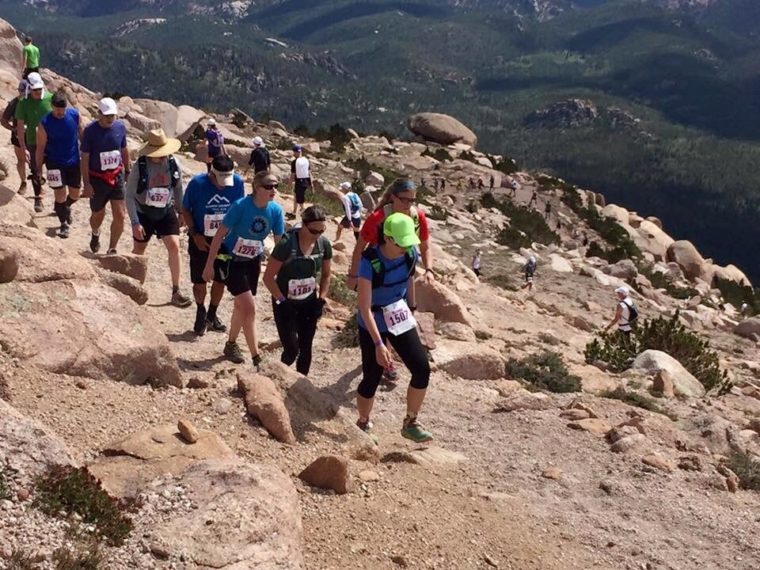 I was sooo close to the finish, yet sooo far away. Then came the sixteen Golden Stairrock step-ups. Wait, wait, wait … you expect me to lift my body weight and scale these ginormous boulders?! With what strength?! I felt as if I were moving in slow motion. No — let me rephrase that — someone paused the DVR. It was ridiculous! I was in complete Grim Reaper watch. The last mile took me 35 minutes! 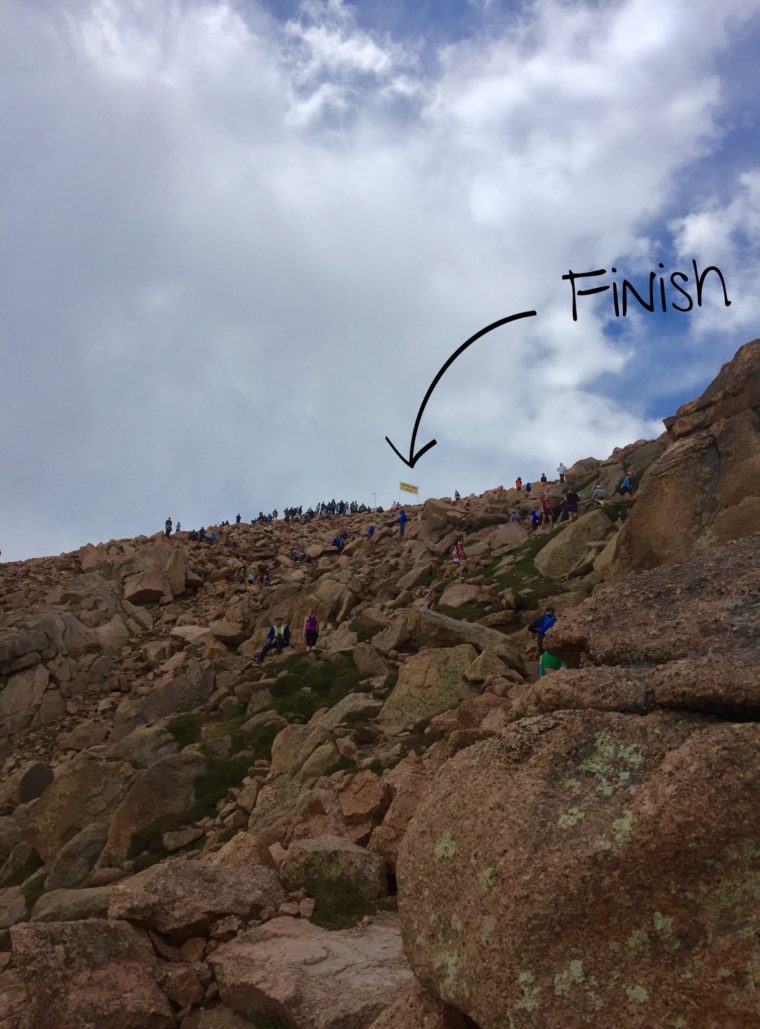 The overall race cut-off time was 6.5 hours. Us newbie flatlanders were told not to expect to finish much before that. Although I proudly finished in five hours (seriously, just happy I finished), I laugh when I recall the moment I looked at my watch and actually thought I might finish in four hours. I had no clue what I was in for!

Did I think about quitting … HECK YEAH. Like every second from Barr Camp on. Why didn’t I? What kept me going? Sometimes it’s the smallest thing. Mine was the back of a shirt: “COURAGE to Start, STRENGTH to Endure, RESOLVE to Finish.” I thanked that complete stranger as I passed for keeping me going. She responded “I wore it for you.” *Insert sappy “I can overcome this” song.* 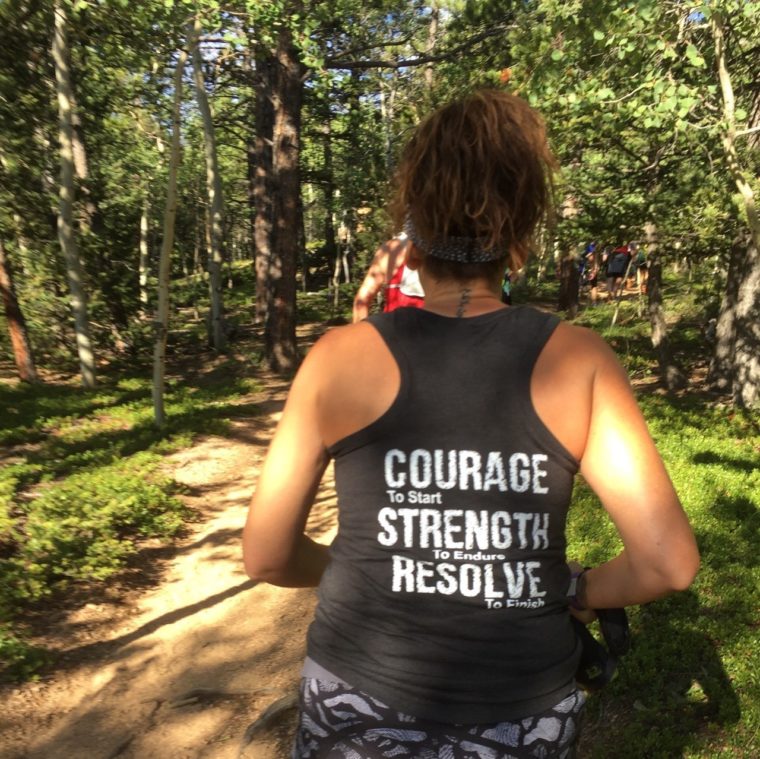 August 19, 2017 is a day that I will not soon forget. But without a doubt, I am a better person because of the journey that brought me to Pikes Peak Summit. Why would I do something as crazy as running up a mountain — especially being a flatlander? The answer is simple: self-growth.

Challenge yourself in ways you could never imagine. NOTHING is impossible! —Nichole