There are so many milestones when raising kids. Granted, we’re only five years in, but there are a lot of milestones that go undiscussed.

You know the saying “It’s like riding a bike?” Ironically, turns out, when you’re teaching another human being how to ride a bike, it’s not like riding a bike. It’s not that easy! At least, for us it’s been a slow progression to help our Mister.

As with most activities and daring sports, I’m a Nervous Nelly. I get scared of falls, so my reactions have not been helpful to the process. However, I think we may have just been introduced to the step we were missing!

See, when we introduced Evan to the bike-riding concept, we did what any parent would do. We found a really cool bike, added on some training wheels and just went with it. We realized Evan was heavily reliant on those training wheels — but they weren’t living up to the “training” part of their name and did nothing to encourage Evan to balance.

Insert the Strider 14x for children 3 to 7 years old (they have models for the younger kids, too, see here) and — boom — we were moving and grooving! 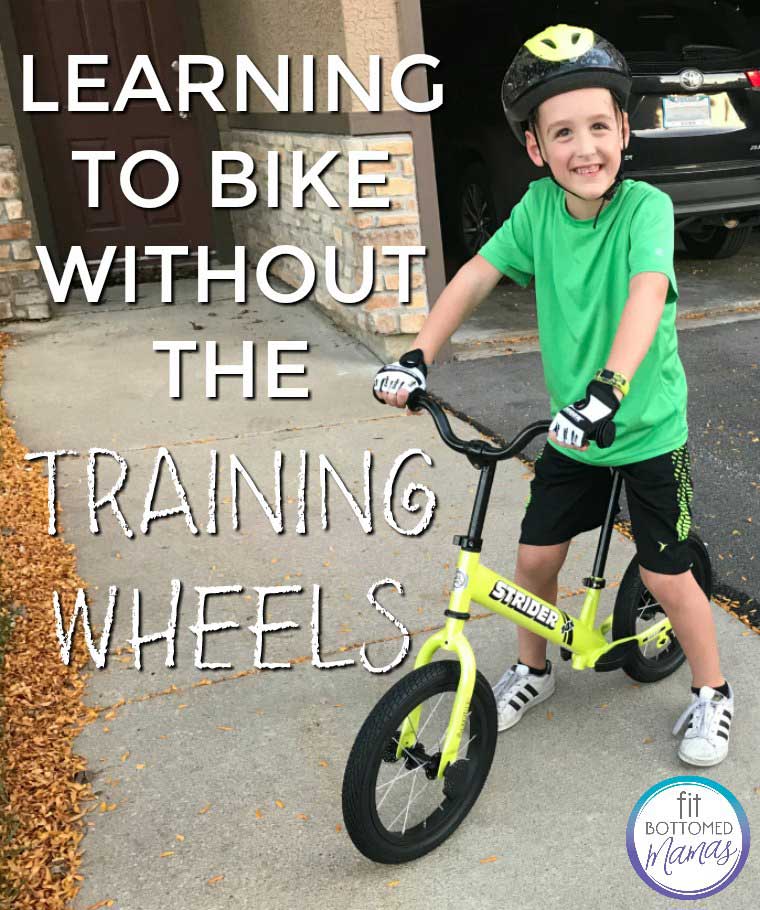 We started using the Strider 14x without pedals, really encouraging Evan to be in control and telling him to chose where to take the bike, not the other way around. The Strider focuses more on balance and building core strength to be in control of movement.

There was no safety net other than Evan’s own body, as his feet are both the method of movement and stopping. Thankfully, gloves and a helmet were supplied to get us started right! Evan gained more and more confidence as he grew comfortable on the Strider 14x. He really grasped the idea of using his body to steer the bike and turn, and gained better control overall than he had when using training wheels.

Transitioning to a true bike with pedals is easy, too. Once the balance is down, all you need to do is add on the pedals that come with the assembly kit. (Note: even if your kiddo was previously a rock star on a Strider Sport 12 model, make sure they’ve nailed balance down before you add those pedals.) Speaking of assembly, it’s easy and not time consuming. (Hallelujah.) The assembly manual was very easy to follow and the images matched the description. I promise, no IKEA training necessary.

We’ve long been fans of Strider products and are thrilled to have the opportunity to try this latest release, courtesy of Strider. Before the Strider 14x, Evan had put his bike away and preferred to stick with his scooter. We are so happy that he’s gaining confidence and excitement to continue moving forward with his training. Before long, you may see Evan doing a triathlon here on FBM!

Wanna learn more about the Strider 14x? It retails for $209 and is available on Amazon and StriderBikes.com now —- with plenty of time for holiday shopping! —Jennifer