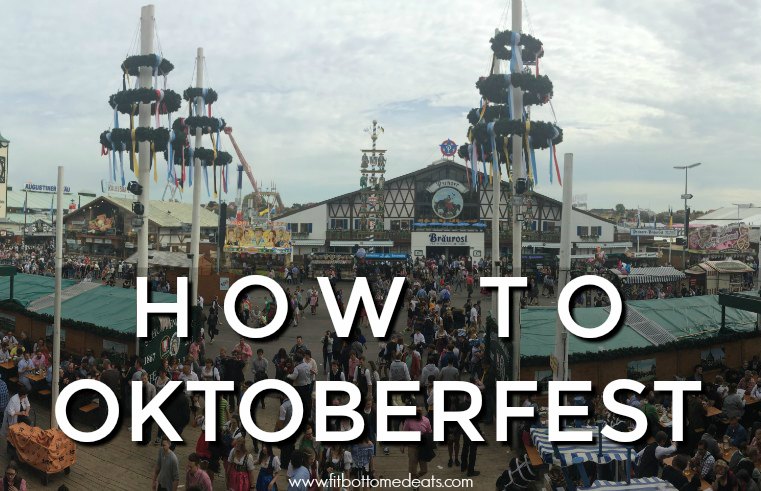 Oktoberfest is a world-famous celebration that stems from the October 1810 wedding of Prince Ludwig of Bavaria to Princess Therese. The entire city of Munich was invited to the celebration, and from there the Oktoberfest we all know and love was born. It eventually encompassed celebrating the harvest as well, and is now held for three weeks in September every year. Oktoberfest celebrations are held in many towns and cities all over Germany, but the most well-known is located in Munich.
Want to celebrate like a Bavarian? Here’s a quick, four-step primer on how to Oktoberfest (based on some serious and thorough first-hand research by yours truly, along with a dedicated team of assistants). 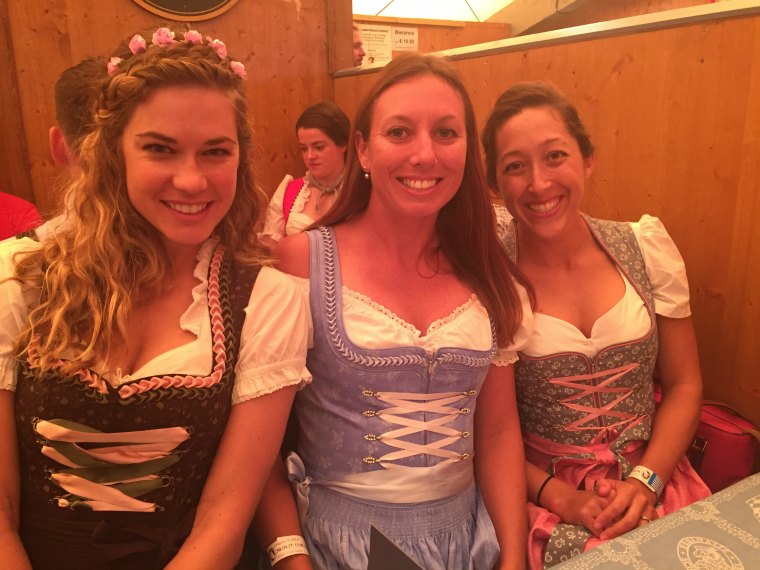 Step 1: Get dressed. We all know that part of the fun of holidays and parties is getting dressed up. Heading to Oktoberfest can be seen as a giant costume party! The traditional outfits for women are called dirndls (which, by the way, can start to feel awfully tight once you’ve indulged in a few of the goodies listed below), and the men wear lederhosen (leather pants). Don’t have a dirndl? Do not despair — there are plenty of shops, both touristic and traditional, ready to exchange your Euros for the perfect festival outfit. There are options for every taste and budget. Some of the materials and embroidery were remarkable. Pro tip: Single girls tie their apron on the left, while women who are taken tie on the right. 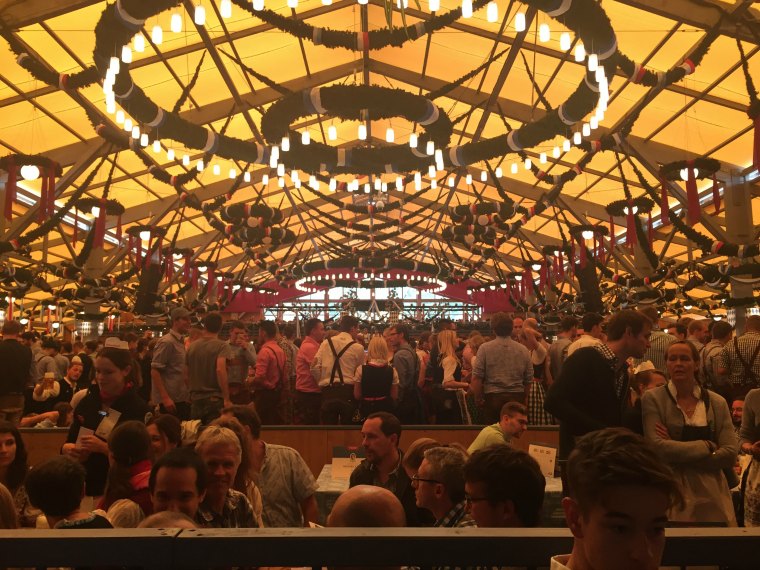 Inside the beer tent. Or, should I say, “tent.”

Step 2: Get tickets! Oktoberfest in Munich is one of the biggest festivals in the world. The fairgrounds become a small city, lined with two story temporary buildings that house all of the traditional beer halls. Although they are called tents, don’t be fooled — these are enormous, sturdy, buildings erected just for the Fest. The rest of the grounds are covered with food stands, carnival rides, music, and other assorted beverage carts. There is no admission fee to the grounds, but in order to get a table at the beer tents (das Bierzalt) at peak times (such as weekends), reservations are needed. Most have outside seating areas as well. 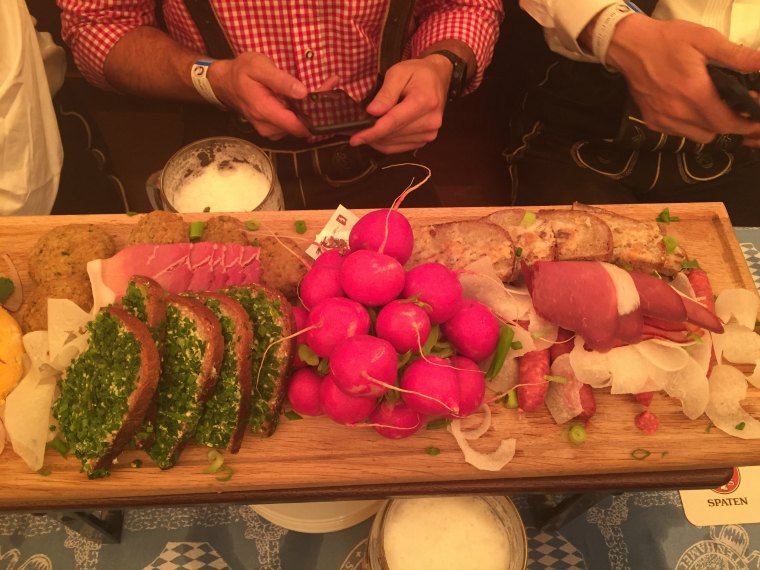 Step 3: Get ready to eat. And drink. And eat some more. When you purchase a table reservation, you also get tickets for food and beer. So not only do the liters of beer start coming, so do plates of cheeses, meats, potatoes, and the biggest radishes I have ever seen. When it comes to beer, no beer snobs allowed. You have two choices — lager or a radler. A radler is half lager/half lemonade, which can be slightly kinder to people when embarking on this epic drinking adventure. Want a water? That’ll cost you seven euro. The best part of Oktoberfest has to be the pretzels. Servers wander the tents selling the biggest pretzels you have ever seen, which go perfectly with the cheeses that end up on your table. Tired of roast chicken and pretzels? Apple strudel is a good bet, and you can buy a traditionally decorated lebkuchen, or gingerbread heart. 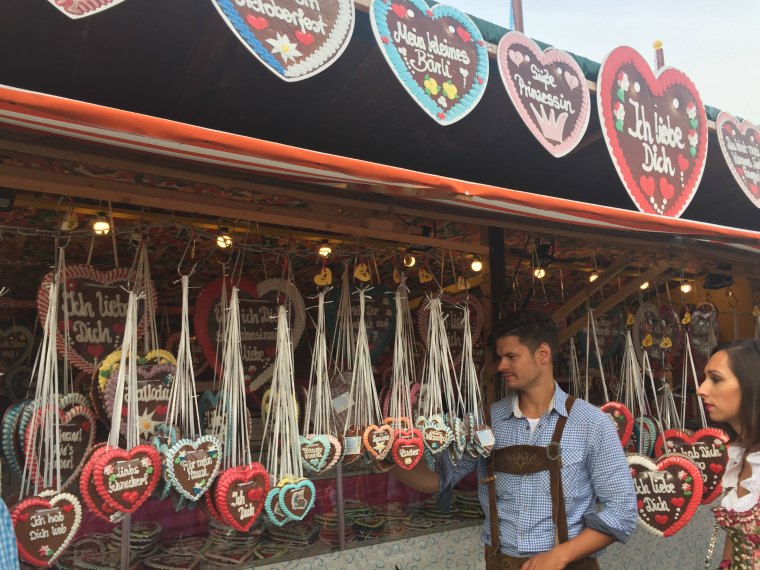 Hard to resist these gingerbread hearts.

Step 4: Get ready to sing along. There is always music in the beer halls, usually performed by a band located on a stage in the middle of the tent. There are several traditional German songs that you will get to know (although it’s always a safe bet to just yell “Prost!” at the end and clink glasses). Other crowd favorites in our tent included “Sweet Caroline,” as well as hits by ABBA.
Have you been to Munich for Oktoberfest, or attended a celebration elsewhere? Lots of bars in the States hold day-long celebrations, but believe me when I say that it’s just not the same. —Cara
New Fitness
New Mamas
New Eats
New Zen
STAY IN THE KNOW
When new stuff happens, you'll be the first to know!