I’m not exactly a homebody, but I don’t really like to leave what I call “the bubble.” You see, my husband and I picked our neighborhood largely because of the location. Shops and restaurants are within walking distance, we can bike to the beach. And considering several of my neighbors are some of my best friends, well, something has to be pretty exciting to lure me beyond my bubble. 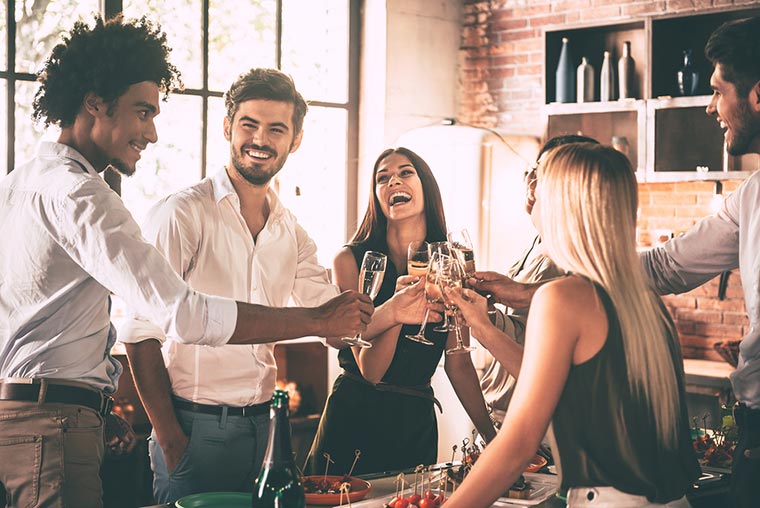 So, when one of my neighbors suggested throwing a progressive dinner party in our ‘hood for New Year’s Eve, I was all in — and happily, so were a couple more neighbors, so we were able to host a four-course moving meal that didn’t require anyone to get behind the wheel. (Unless, of course, you count beach cruiser wheels, because we did have quite a little bike gang riding from place to place!)
Not familiar with the concept of a progressive dinner? All that really means is that each host handles one course, and the party moves from one place to the next. It’s fun, it’s less complicated than it sounds, and it’s totally something you should do if you live near a couple of fun friends.

1. Choose your hosts and pick a day. There’s no set number of stops, so put the word out to friends in the area and see who’s interested in hosting, then pick a date that works for everyone.
2. Invite guests — if you want. You can keep the party strictly to the hosts if you like, and, truthfully, unless you share a number of communal friends, that might be the best plan. But, if you have a few friends in common and the hosts are comfortable making enough to feed a crowd, extend the invite! We had around 20 people, which was probably a little larger than I might recommend in general, but New Year’s Eve is a special occasion and we made it work with very little trouble.
3. Plan the courses. This is where the fun really begins, although my advice is to try to keep it fairly simple. If you have a smaller group — especially one full of foodies — you can plan a theme or focus on an ingredient pretty easily.  The larger the group, the trickier this becomes, though, because you’re likely to deal with more dietary restrictions, plus coming up with a recipe that can easily feed 20 is far different than finding one for eight. It’s also important to keep in mind that, unless you’re the first host of the night, you’ll need to serve a dish that can either be made ahead, left alone to cook while you make the rounds, or prepared quickly when you arrive at your home.
Our courses were, as mentioned, cocktails (a variety of beer, wine, prosecco, and sparkling waters), apps (an assortment of Trader Joe’s frozen apps), main (two types of enchiladas, which I made the day before — I left the appetizer course about 15 minutes early to start reheating them), and dessert (ice cream bar with cookies, prosecco-soaked fruit, cookies and more). These worked really well, but you could easily have courses consisting of soup or salad, or just have lighter bites at each rather than a specific main course.
4. Set a schedule. We aimed to keep each stop to right around an hour, including travel time from one spot to the next. Based on that, I’d say it’s probably not realistic to cut the courses any shorter — in fact, we were running a little late by the time we hit our main dish at stop three.
5. Talk about transportation. This is key if you’re planning to serve drinks at each stop, but even if you’re not, this is part of the party and worth discussing! If locations are within a block or two (and weather cooperates), walking is great — but make sure everyone attending knows the plan so they can dress accordingly. A block in sandals is far different than one in heels. As I said earlier, we encouraged people to use bikes, and that ended up being a lot of fun. If the locations are spaced out farther, consider carpooling with a DD or going in on an Uber or Lyft to stay safe.
6. Figure out a fun ending. What will you do once the final course has been served? Play Rock Band (like we did)? Start a card or board game? Hop in the pool? Head out to your favorite neighborhood late night spot? Think it through ahead of time and spread the word!
7. Other considerations: Because I was cooking a meal for so many people, I asked guests to BYOB for the main course, which I would recommend if you’re not planning on a specialty cocktail or something. For one, it kept my costs down, and it also gave guests who weren’t hosting something to contribute. In my social circle, it’s very unusual to show up to a party empty-handed, and this wasn’t the kind of meal where asking people to bring a dish would work, so asking them to contribute a bottle of bubbly was perfect.
Have you ever thrown — or attended — a progressive dinner party? What tips would you add? And what did you eat? —Kristen