You guys might remember how I’m obsessed with my Instant Pot. And while I’ve been making tons of new recipes (mostly from Nom Nom Paleo’s latest cookbook

because hers have been knocking it out of the park, yo), I’ve also been playing around with tweaking some of my old standbys. Particularly those standbys that actually need a lot of standing by and waiting because they take so long.
Recipes like my African Chicken Peanut Soup.
And, guys, the original recipe is really, really good.
BUT I HAD NO IDEA HOW GOOD IT COULD GET.
Because this version in the Instant Pot

? Whole. Other. Level.
Unlike the original, the sweet potatoes really break down and thicken the soup, giving it a deeper and richer flavor and consistency. It’s seriously divine and so hearty and filling.
And before you try it, a friendly reminder: it takes the pressure cooker about 10 minutes to come to full pressure — so factor that in to your timing. The entire recipe took me about 40 minutes from start to finish. This makes a bunch for leftovers, too, which is another reason it rocks. 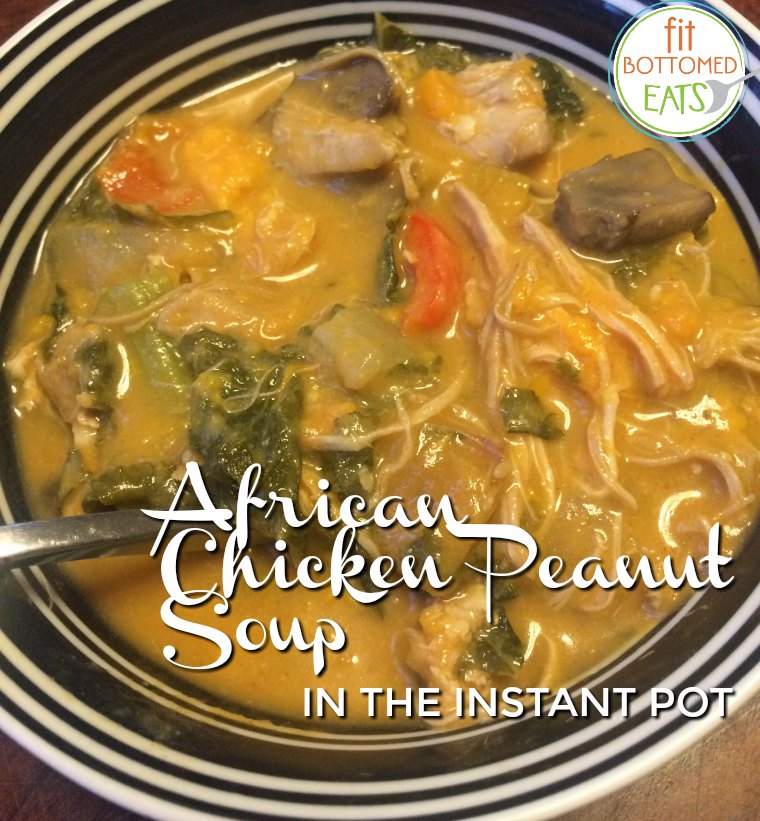 INGREDIENTS
2 lbs boneless skinless chicken thighs
4 c chicken broth, divided
1/2 c chunky salsa
1 lb sweet potatoes, peeled and chopped
1 lb mushrooms, sliced
1 large onion, chopped
1 tsp garlic powder
1/2 tsp smoked paprika
1/2 tsp cumin
10 oz chopped kale (one bag at Trader Joe’s)
1/2 c peanut butter
Salt and pepper to taste
DIRECTIONS
1. Put chicken and 2 cups broth in Instant Pot. Set to 12 minutes on high pressure. Once done, manually release.
2. Once done fully releasing, add in remaining broth, salsa, sweet potatoes, mushrooms, onion, and spices. Set to 8 minutes on high pressure. Once done, manually release.
3. Once fully released, turn Instant Pot to sauté and stir in kale and peanut butter. Season with salt and pepper to taste. Cook for an additional 5 to 10 minutes, or until kale is wilted and the flavors really come together.
Have you adapted any of your usual recipes for the Instant Pot and found they’re better, too? I just made my usual chili, and holy explosion of flavor. That’ll be the next recipe I perfect and share!  —Jenn