I’m not entirely sure what I expected when I received an invitation from the Jamaica Tourist Board on a press trip focusing on the Kingston City Run. I mean, sure, I expected sunny weather, some spicy food, and a chance to check out a new city in pretty much my favorite way in the world. So I guess I did go in with a few expectations.

But I did not expect to get it so thoroughly. Jamaica is a country, a vacation destination, the home of Usain Bolt — but you guys, in my experience, it’s really an experience with an energy all its own. And it hit me hard. 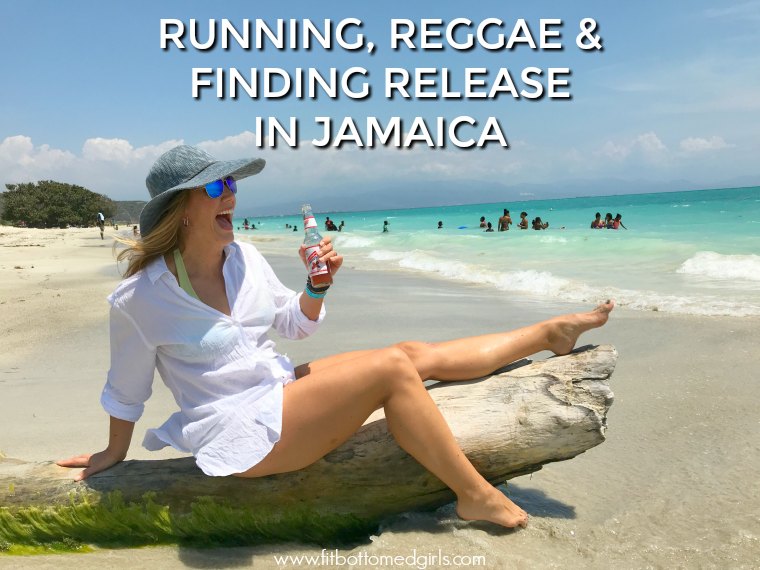 I didn’t expect to break down crying in a yin yoga class after the instructor whispered, “Let go, just let it all go,” in her gentle, soothing, lyrical accent — but oh, I cried. I didn’t expect to be moved to hug the owner of the raw vegan café we visited for lunch, but I hugged him tight. I didn’t expect to run — actually run — 3.5 miles after a few months on the bench, but during the Kingston City 5k, I found myself fueled by the determination of the other runners, and my feet simply didn’t want to stop.

I definitely didn’t expect to develop a love of reggae, but after a visit to the Bob Marley Museum, guess what’s currently pumping on my playlist?

Jamaica, you are full of surprises. And I pretty much loved them all.

The Kingston City Run was the event for which I was invited (along with two fellow journalists from the States: Teresa of Veg Travel and Fitness and Sarah of JetSetSarah), and it offered a 5k, 10k, and half marathon. As far as races go, I’d consider it a really good option for newbies for a few reasons: There were a couple of fun events leading up to it (a welcome party at Devon House on Friday night, which I missed because I’m not a night owl, and a carb party on Saturday on the rooftop of The Jamaica Pegasus, which was where I stayed and if I were to do that race again, it would certainly be my pick for accommodations), and the race itself offered plenty of wide spaces so people could easily go their own pace without being in the way or getting stuck (with just a few exceptions).

The vibe was joyful, inclusive, and celebratory — especially at the start and finish, where there were drummers, dancers, stilt-walkers, and so much amazing music. I loved it. 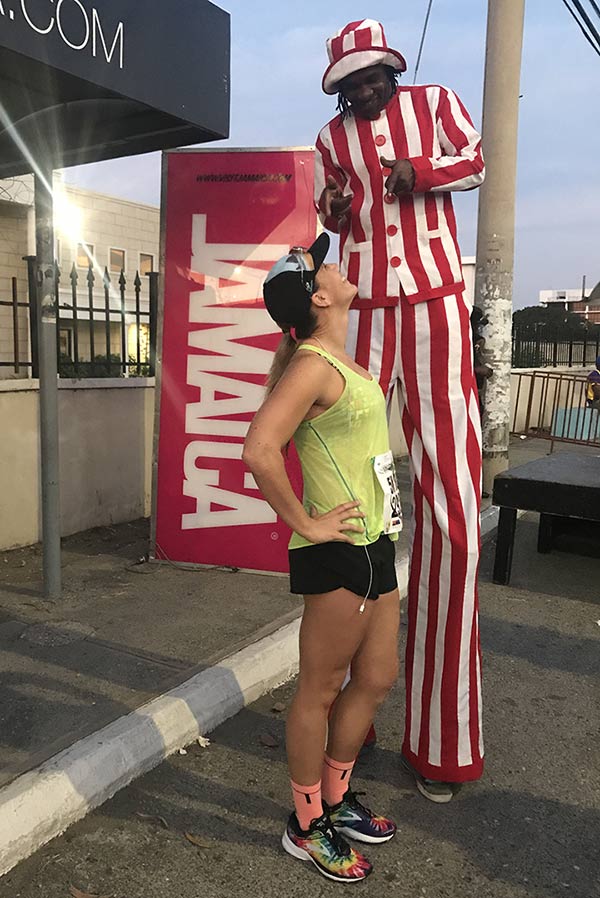 Finger guns right back at you, tall sir.

(That said, you should know that the big buffets that we see after races in the U.S. are not necessarily standard everywhere, so, unless you were hooked up with a corporate group in this race, you only got a water bottle — no biggie for me, but could’ve been rough for the 10k and half marathoners. Also, if medals are important to you, ask whether there will be one for every distance, as the 5k did not get them. Again, fine for me, but if it’s your first race and you want a medal? Train for a 10k, baby!) 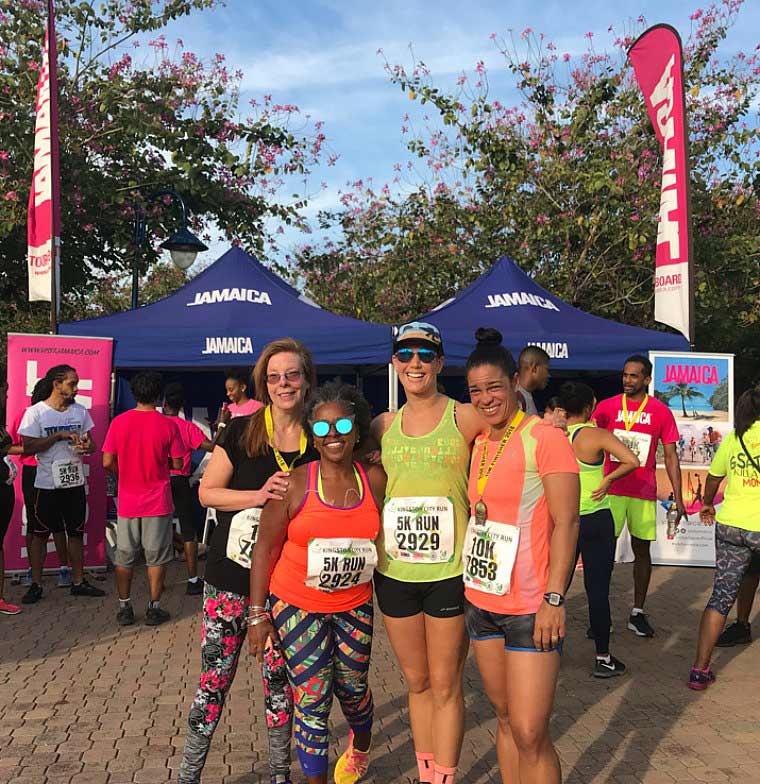 Interesting side note about running in Jamaica that I learned from our incredible tour guide, Lisa Adelle-Jondeau, who’s a fellow fitness fanatic and runner: training runs are typically (and pretty much exclusively) done in groups — and runs take place very early in the morning because it becomes so hot out so quickly. (I’d bet it’s also done in part to avoid traffic, because Kingston traffic is no joke.) Groups rotate who leads each week, and whomever is leading plans the routes, provides water stops, and also even coordinates a police escort to follow behind the runners. I will never take my ability to step out my front door and get in a quick, unplanned solo run for granted again!

Soaking Up the Culture

I’ve already talked a bit about my fun day of food and fresh air over on Fit Bottomed Eats, and I’ll share more soon (because you guys have to hear about the vegan cafe I mentioned earlier — just incredible), but I’d be remiss if I didn’t mention the Jamaican people. I was really fortunate in that our tour guide, Lisa, was from the area (so when she took us to Afya Yoga, it was because it’s a studio she knows and loves. The gorgeous open air studio, the incense, the focus on releasing muscles, breath, sound, everything — it was perfection). Sarah, my fellow journalist, had also spent part of her life in Kingston, so we didn’t just get the tourist treatment — we saw the area through the eyes of locals. 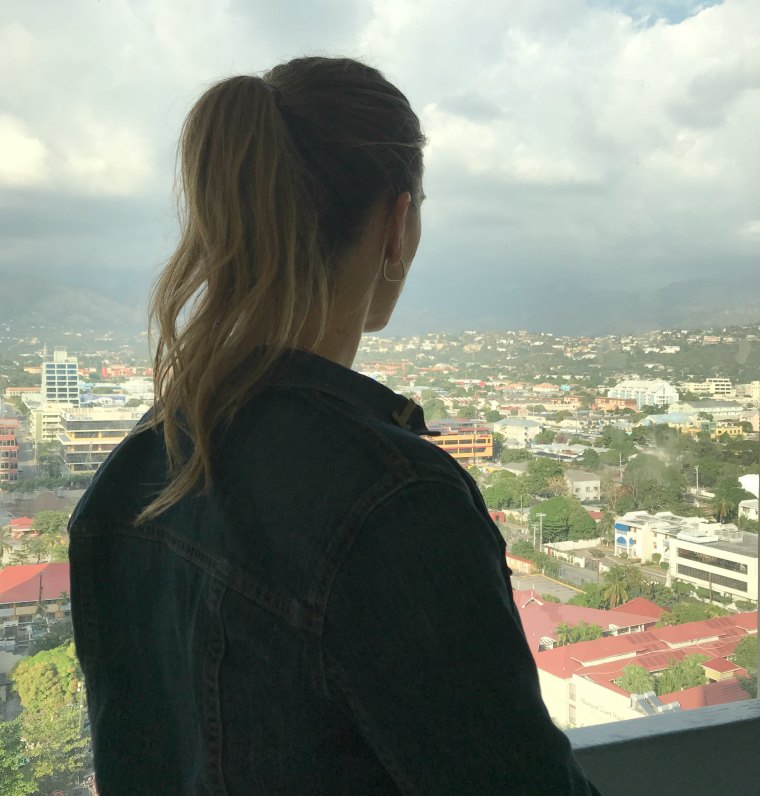 Ocean behind me, Blue Mountains (yes, where the coffee is grown) in front of me.

And we met loads more, because, as large as this capital city is (and it is large — it’s the seventh largest natural harbor in the world, as well as the fifth busiest harbor in the Americas), we didn’t turn a corner without running into someone who knew one of the two women (or in some cases, both). That certainly added to the warm, friendly vibe I got, but it didn’t only come from the people I met as the friend of a friend — it came from all around, and I soaked it up.

Now, I have to say that when I told friends and family that I was heading to Kingston, I was met with a few cocked eyebrows. Kingston? Why not, say, Montego Bay, Negril, or Ochos Rios, all of which are more well-known as tourist-friendly resort destinations?

And it’s a fair question — Kingston is a capital city, and like many big, industrial cities, it sees its fair share of crime and there are areas that tourists should avoid. Some mentioned the fact that there’s a travel advisory for parts of Jamaica, including areas in Kingston — but, let me point out that it’s at the same travel advisory level (Level 2) as Turks and Caicos, United Kingdom, Trinidad and Tobago, Italy, and loads more countries that I don’t think most people would bat an eye at. I certainly didn’t receive the same response on this recent trip.

So, basically, here’s my thing: One should always use caution when traveling somewhere new. In regard to Kingston specifically, I will say that I wouldn’t drive myself around there — there are plenty of official taxis available, and I’ve talked to numerous people who simply hired a private driver for the day when they wanted to get around the island. It’s also not a city I’d aimlessly walk around all by myself (although, really, I don’t do that anywhere).

But there was never a time when I felt unsafe with our group, and I wouldn’t hesitate to go back. Maybe I’ll have to keep an eye on the Reggae Half Marathon, yeah?

I’m going to ask you guys a question that Sarah asked me: When you travel, what kinds of quirks, habits, or superstitions do you have, if any? I don’t have a ton, but years ago, when I rarely flew, I got in the habit of picking up the types of snacks I’d never eat otherwise — like Combos. Now, even though I fly many times a year, I find myself craving those damn crunchy bits of salty, cheesy goodness. —Kristen