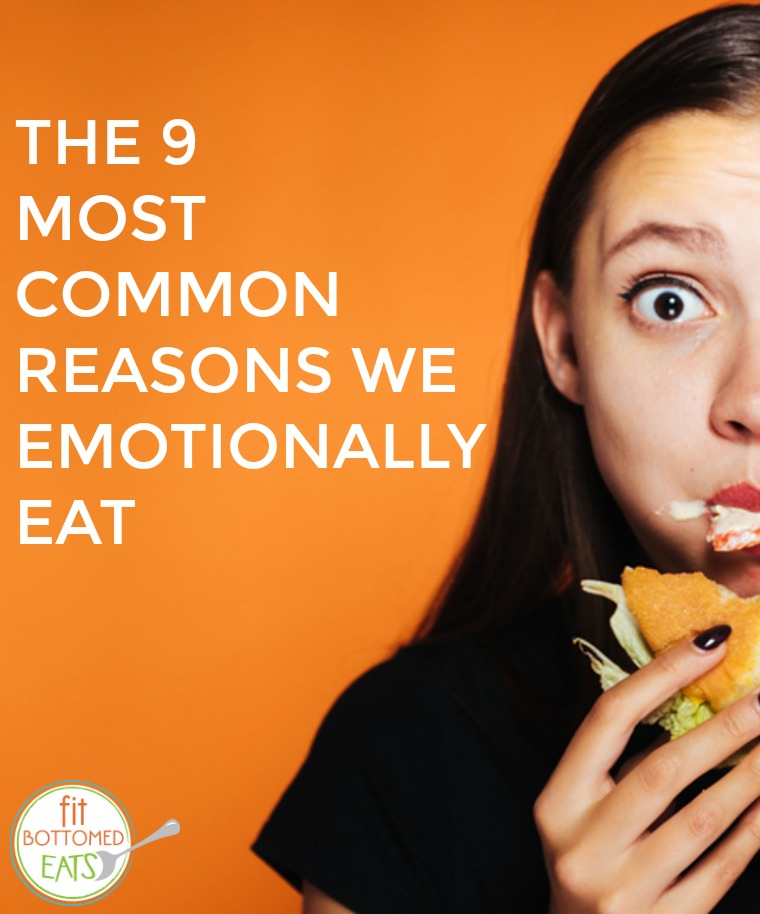 Emotional eating sucks. And I know. Because I’ve been there.
Now, when I say “emotional eating” — I mean the times we overeat or eat mindlessly or eat even though we’re not hungry out of a desire to check out from a situation or a feeling.
(Technically, I believe emotional eating can also include times we eat birthday cake to celebrate or have that extra glass of champagne when toasting at a wedding — but, usually, eating out of happiness isn’t an issue people typically worry about. It’s more about the negative or gray-area times when we eat for reasons that have nothing to do with hunger.)
And negative emotional eating or stress eating is really, really common. When you’re in it, it can feel like you’re the only one struggling. But the truth of the matter is that more than a third of the U.S. population regularly eats due to stress.
Let that sink in for a second. Heavy stuff, huh? No pun intended.
So why do so many of us do this? I could go on and on about how it’s socially acceptable to do so (and even encouraged as a way for us to process our emotions instead of, you know, speaking our minds) or how we’ve too long deprived ourselves of the freedom to eat the food we crave (especially those commonly perceived “bad” foods like dietary fat) which has resulted in us being downright HANGRY much of the time, but I’ll save that for another post.
Because while I do believe those things play a BIG role, it’s also true that emotional eating serves a need — conscious or not. And knowing what that need is can help you to better serve it, without food. Because we all know, the food and overeating isn’t going to fix it.
Now let’s get down to it. Below are the nine most common reasons we overeat, based on self-reported research by PsychTests from close to 500 people. Okay, yes, isn’t a double-blind scientific study, but from my experience healing my own emotional eating issues and helping hundreds of other women do the same, I’d say these nine reasons are SPOT ON.

The 9 Most Common Reasons We Emotionally Eat

1. Lack of intimacy. This is a big one — and it doesn’t matter how many friends you have or don’t have. If you don’t feel like you have support — or you’re not comfortable reaching out for support — food can begin to act as your support system.
2. Shame. Brene Brown has done amazing work in this arena (OMG, Brene, if you’re reading, please, please, please come on our podcast!), and shame is one of those emotions that we all have problems expressing and releasing. So is it any wonder that we reach to food to deal?
3. Fear of challenges. When we’re afraid to do new things or don’t like to be pushed out of our comfort zones, we tend to turn that fear inward. And feel inadequate. And cocoon up in the only way we know how — with food.
4. Conflict avoidance. What’s easier than having that difficult conversation or facing that difficult truth in the short-term? Eating food.
5. Fear of judgment. Of all of the reasons, this is the one most tied to negative body image. Basically, you think you “should” look a certain ideal way and because you don’t, you punish yourself.
6. Boredom. This one is basically a bad habit developed over time (like mindlessly munching while you watch television) — but I still feel like it comes from a deeper sense of lack. Not sure what to do? Who to do it with? Food never judges and it passes the time.
7. Self-sabotaging beliefs. You really want to change. You may even be really motivated to change. But the story you’ve been telling yourself for years is that you’re an emotional eater — and so you act that way.
8. Rebellion. You rebel against your own strict diet or you rebel against your parents who never let you eat sweets when you were a kid. Who could blame you?
9. Abuse. It can be physical, emotional and/or sexual. Basically, you’re subconsciously creating a barrier of safety between you and the abuse. Or you’re eating to punish yourself. (So many hugs on this one because IT IS NOT YOUR FAULT.)
The good thing about this research is that once you know what’s going on and how food is fulfilling a need, you can re-engineer it to see what other ways can you meet that need in a healthier and more productive way. Sometimes, the awareness is enough for you to see the pattern and break it. Other times you just need to brainstorm a few other ways to work through the emotion (call a friend, journal it out, go for a walk, meditate on it). You may even need to see a professional (which I totally urge you to do — it changed my freakin’ life).
But know this: you’re not alone and you can get through it. Promise.
What’s been your experience with emotional eating? Again, you’re not alone. —Jenn