Your hair makes a statement — whether or not you intend for it to do so. It’s true for everyone, but especially so for women.

Think about it. Throwing your hair into an upside-down pineapple at the gym indicates you’re ready to get to work. A sleek, perfectly coiffed bob is a sign of a certain level of attention to detail, while messy, beachy waves tend to evoke a more laid-back vibe. Short hair on women is still seen by many as a bit radical, and although it’s far less of a counterculture statement than it used to be, bright pinks, purples, blues, and other hair colors not found in nature is still edgy. Even doing nothing in particular with it says that you aren’t worried about adhering to conventional beauty standards — and yeah, that’s a statement. 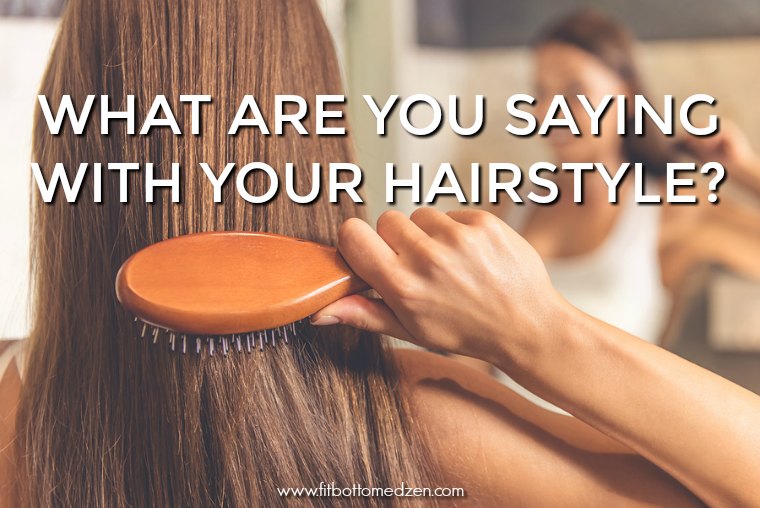 (And this isn’t even touching the racial issues that abound when we discuss hair — not to mention our old friend, cultural appropriation. I’m not even remotely qualified to discuss it myself, but you know who is? Americanah author and one of the most brilliant writers on the planet, Chimamanda Ngozi Adichie. Listen to her when she says hair is political. She knows her stuff.)

Oh, and there’s also the fact that our hair can change pretty drastically throughout our lives. I’ve seen my girlfriends’ hair take on entirely different textures and thicknesses following pregnancy or chemo — and, really, it can change quite a bit just with age. (Just take a look at my childhood photos with straight hair, then catch up with on a humid day in the present.) Plus, you know, there’s the gray hair issue, and the fact that many women experience thinning hair as they age.

Hair has been on my mind quite a bit over the last week, because, for one thing, I had a hair appointment and since I only go once every few months, I always wax a bit poetic over what I’d really like my hair to look like, what I can realistically expect my hair to do, and what I’m actually willing to commit to in terms of upkeep at the salon and time I’ll put into it each day. (The answer, in case you’re dying to know: Not a lot, so, we pretty much stick with long layers and a few highlights so that I can let it all go for a few months, then schedule another appointment when the brush really starts getting stuck.)

Anyway, I recently had an opportunity through Nature’s Bounty to chat with gold medal-winning Olympic figure skater Dorothy Hamill, and in addition to talking about the workouts she’s into now and what she thinks about today’s figure skaters (which you’ll hear more about on Fit Bottomed Girls soon), I had to ask her about her iconic wedge haircut. Truly, it’s almost as legendary as her winning performance — and her response was more touching than I could’ve expected.

“I’d always had shorter hair, and I wanted to find something that was comfortable and stylish and worked for skating — something that wouldn’t be in my face when I landed a jump,” she said. “I looked through all the magazines to find something that looked good and would work, and then I saved up all my money to get my hair cut by this brilliant Japanese hairstylist. He had his own salon and did a lot of fashion models’ hair. His name was [Yusuke] Suga.”

Dorothy was training in Denver, and scheduled her appointment with Suga — whose salon was in New York — right before the Olympics. “He’d been a fan of skating, although I didn’t know that [at the time],” she recalled. “He stayed late because my plane flew in from Denver and didn’t arrive until maybe 7 o’clock. He was just as cute as can be, and he died a long time ago — I miss him as a person more than ever.”

Although she did the research and came in with pictures of looks she liked, she gave Suga credit for creating the final look. “He was responsible for it — and I was kind of thrilled when people liked it and were trying to have the same haircut. I guess all that [magazine] research paid off.”

I can tie so many moments to hair. My cousin, who I idolized, taught me the basics of French braiding my own hair — after which I spent the 2.5 hour drive home braiding and unbraiding until I’d gotten it right. (I couldn’t lift my arms the next day.) I remember sitting in the salon, getting a perm (because, you know, it was the 80s) and listening to the older girls gossip, and wondering whether, when I was their age, I’d be one of them — of if I’d be the subject. (Turns out, a bit of both, which is probably the case for everyone.) I’ve chopped my hair to nearly a pixie, bleached it to a light, bright blonde, worn it straight, made it curly, been a red head, added pink and blue streaks. Every time I’ve wanted to tweak the impact my sheer appearance made on others, my hair has been the place to start.

Which makes me wonder what it says that I’ve kept it more or less the same for the last three years.

So, I’m curious — what do you think your hair is saying? And are you making the statement you’d like to be putting out there? —Kristen