Sometimes a memorable meal is all about what’s on the table — the flavors and textures of the food, the way the wine pairs with it, the courses, the way a dish is plated. 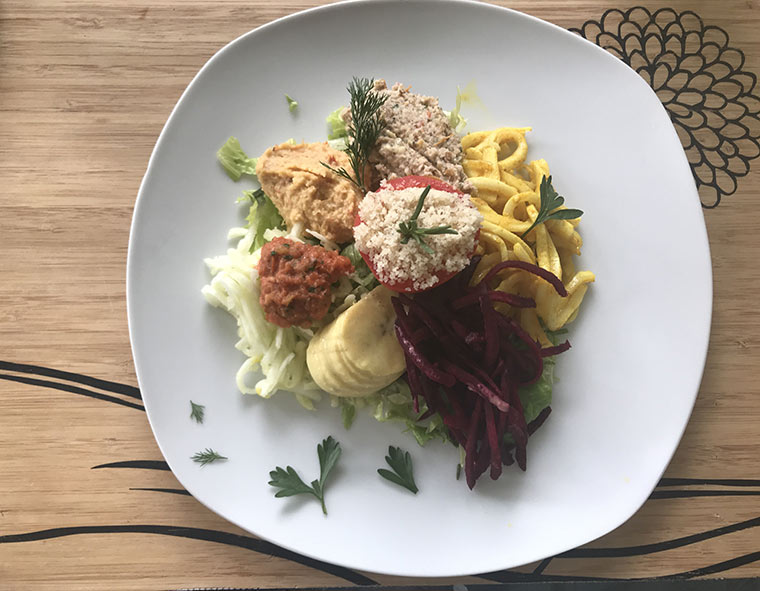 But sometimes, even if the meal is truly delicious, the experience is made exceptional by who’s at your table, and that was certainly the case for me at Tehuti Cafe in Kingston, Jamaica.
Now, Jamaica might be best known for dishes like curried goat, jerk chicken and fried fish with escovitch sauce, but you won’t find any of that at this little gem. Tehuti Cafe is a raw, vegan cafe featuring fresh juices, nut mylks, salads, pizzas, and desserts, made partly from fresh ingredients grown in the garden you pass on your way to the door.
The cafe is small, quaint — and also serves as home to its namesake, owner Tehuti Maat. It was his presence that elevated what was already a delightful meal something I’ll never forget. 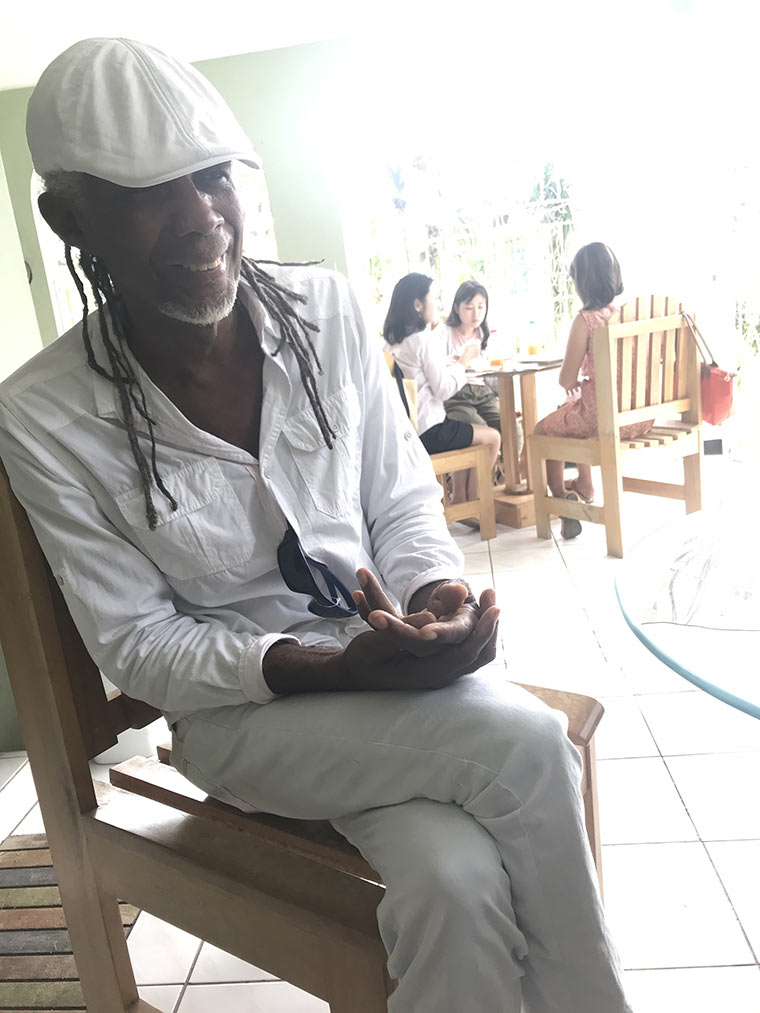 Tehuti Maat, owner of Tejuti Cafe, talking to us about his passion for healthy food.

Tehuti became a vegetarian before his 20th birthday after his doctor warned him about his high blood pressure and he realized that he didn’t want to have the same health issues as he saw the rest of his family suffering. He embraced the notion of food as medicine, and the more he learned about nutrition, the more he leaned into his plant-based lifestyle. Eventually, he was following a raw, vegan diet — and from there, he became a lifestyle transformation consultant and nutritionist. His eponymous cafe came about when his clients told him that, while they were fully on board with his recommendations, they didn’t have the time or desire to prepare everything themselves.
That worked out really, really well for me when I visited as a guest of the Jamaica Tourist Board earlier this year, because it meant that I, along with my fellow journalists on the media trip, had the opportunity to enjoy fresh juices, a variety of cold salads (green salad, hummus, cold veggie noodles — and the coconut curry was off the charts good), a slice of raw, vegan pizza made with the most incredible marinara sauce, cashew cheese, peppers, pineapple, and olives on a walnut-based crust. 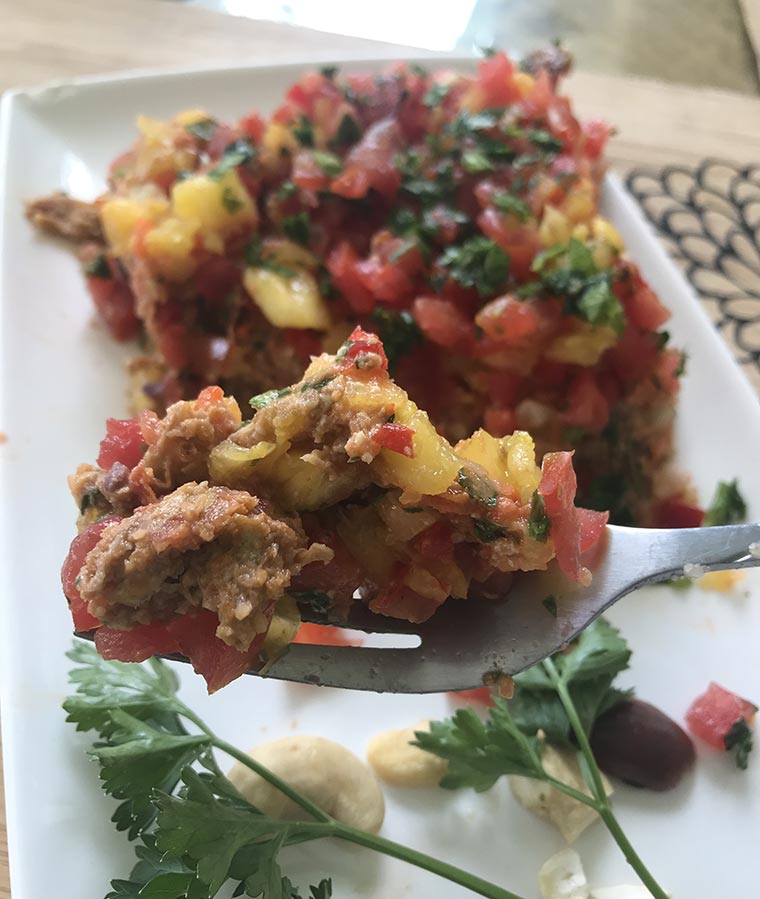 As we finished, Tehuti sat with us and told us more about his background and his work. He talked about the various ingredients he relies on to help those suffering from cardiovascular disease, diabetes, hypertension and more. And, interestingly, he works with some of the local Kingston doctors, making sure to send clients in when he sees that they need medical attention, and the doctors send patients who are interested in natural remedies his way.
What a concept, right?
Now, as some of you might know, especially if you listen to the Fit Bottomed Girls Podcast, I’m not known for being much of a hugger — at least, not with strangers. Or with friends who I see all the time. Basically, I think hugs are special and I don’t really hand ’em out willy-nilly. But after grabbing a picture with Tehuti outside the cafe, I turned to him and asked if he’d mind a hug. (He didn’t — and he wasn’t even weirded out when I held it for what was probably a little too long.) I broke the embrace and nobody was more shocked than I to realize I had tears in my eyes. Something about Jamaica, that experience, and the connection with Tehuti really touched me in an unexpected way, and I’ll never forget it. 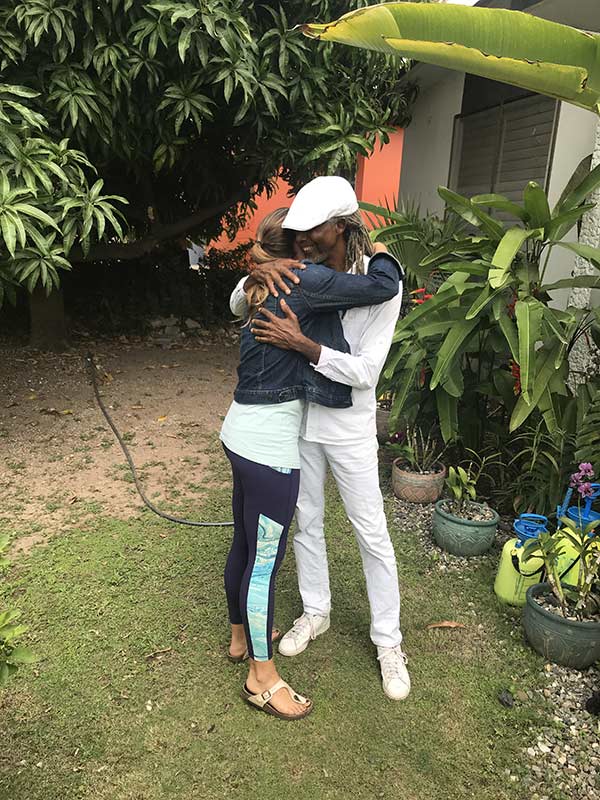 It’s not often than I hug the chef after a meal, but when in Jamaica …

(I’ll also never forget that marinara sauce, because oh. my. gosh. AMAZE.)
What made your last memorable meal so special? The food? The setting? The company? —Kristen
New Fitness
New Mamas
New Eats
New Zen
STAY IN THE KNOW
When new stuff happens, you'll be the first to know!