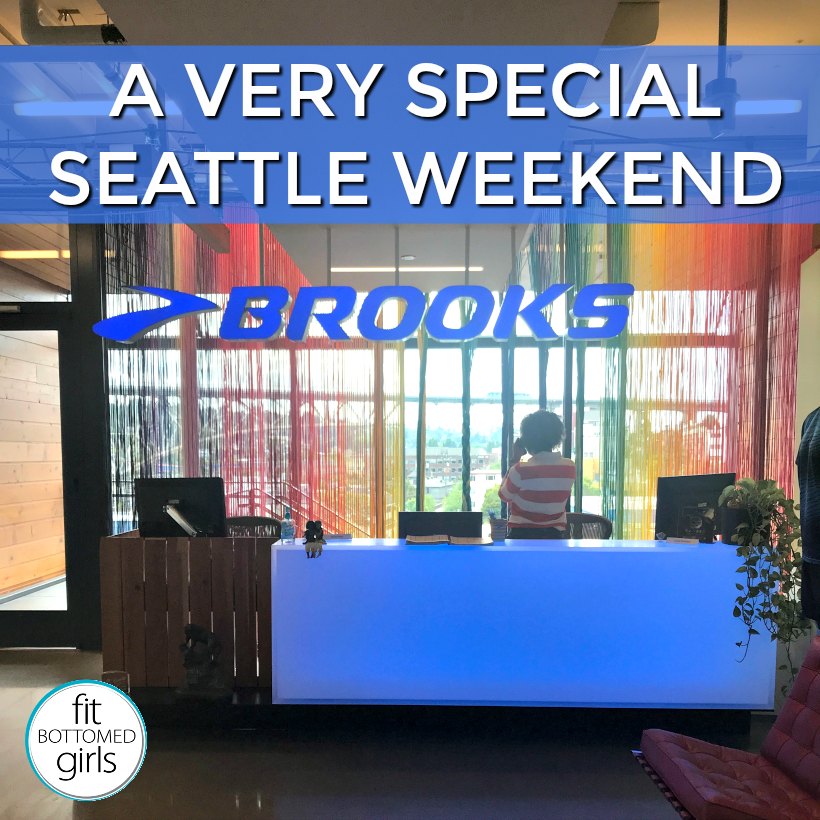 It’s one thing to be pumped about a getting a package in the mail containing new running shoes and workout clothes from a beloved brand — but our ambassador role with Brooks Running goes way beyond that. We’ve embraced this role for six years now, and every year, Brooks goes above and beyond to not only seed us with the hot new gear, but they also bring all the ambassadors together once a year to learn more about the company, the products, the athletes, and the Run Happy culture.

(Quick note: My travel, meals, and accommodations were paid for by Brooks, which I super appreciate! And we are affiliates, so if you click through on products, we might earn a slight commission that helps to keep the cupboards stocked with almond butter. But please know I’m under no obligation to write about this trip or anything that took place during it. I’m just REALLY JAZZED and can’t wait to share!)

Jenn and I have enjoyed all their trips: 2017 (Altitude Camp in New Mexico), 2016 (Track and Field Olympic Trials in Eugene, Ore.), 2015 (Rock ‘n’ Roll Seattle Half Marathon), 2014 (our first trip to Seattle), and 2013 (New York). This year, they brought us back to Seattle for the Special Olympics USA Games, which took place at the beginning of the month. To say that being on the cheer line there was one of the most powerful experiences of my life is no exaggeration — and I was only there for a few hours before I had to leave to catch a flight. I’m already making sure I’m in the loop for future opportunities.

But, I digress — we’ve got two days of running fun to cover before I get to the Games!

What’s Up at Brooks HQ 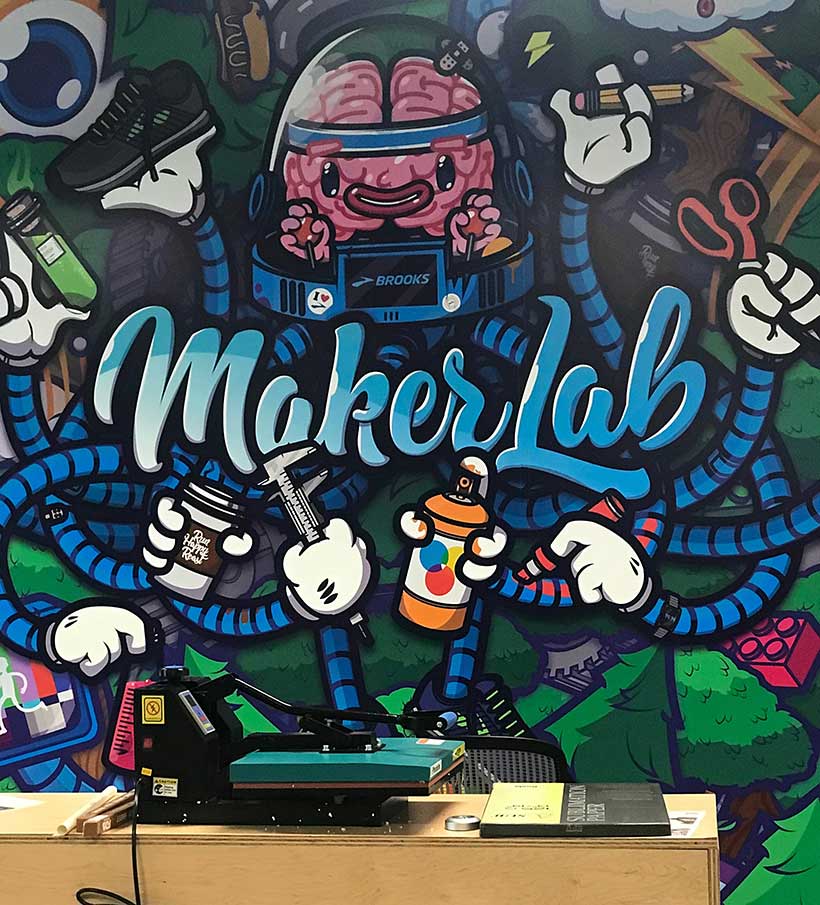 The Brooks headquarters — including the “Maker Lab” where they research, develop, and test the latest Brooks materials and products — is located in Seattle, right above their Trailhead Store (aptly named due to its location near the Burke Gilman Trail at the corner of North 34th Street and Stone Way North in the Fremont neighborhood), and we kicked off the weekend with a tasty lunch from the Brooks Beastro (Get it? Because their athletes are the Brooks Beasts?), and a quick word from Brooks CEO Jim Weber, who let us know that we should be ready to expect the unexpected, because the brand is becoming ever more comfortable with the idea of shaking things up.

He was not wrong, let me tell you that. And I. Am. Psyched. Not only are there new colors, fabrics, and patterns coming up (in both apparel and shoes), but there are some fantastic updates that show real attention to detail (like pockets on leggings, open back tops, and, finally, a solution to the pain-in-the-butt lace lock technique!).

Now, I’d toured the lab previously, but it’s always fascinating to see the 3D printer at work, not to mention watch a shoe be sawed in half (something they do with some frequency to see exactly what’s in a shoe — and how it’s holding up), and check out some of the wear testing they do. Plus, we had a chance to see some product testing in action! 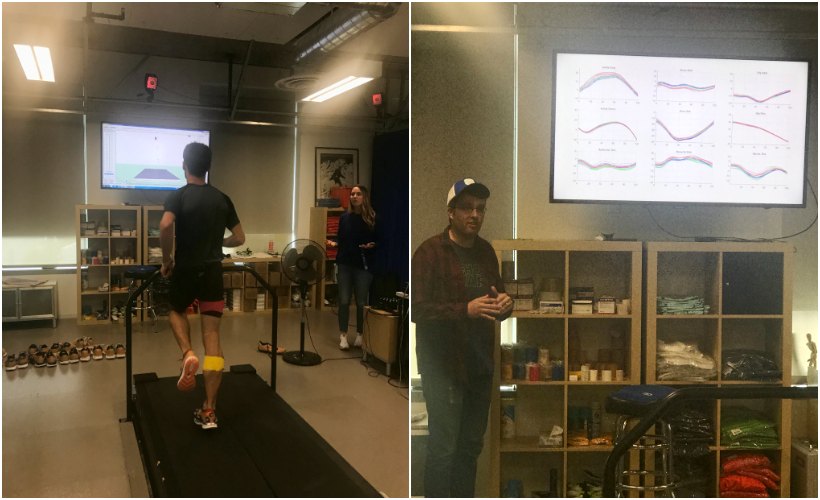 Excuse the poor photo quality here, please, because this is so cool. The dots on his right leg are tracking his movements (L). Runners repeat the same workout in different shoes to see how the materials and design affect the way the body moves, and all of that is charted in various colors to make it clear when a shoe really changes a runner’s biometrics (R). So. Cool.

Also so cool? This Fall 2018 shoe! It’s the Bedlam, which is the new support version of the Levitate 2 (which we already dig). 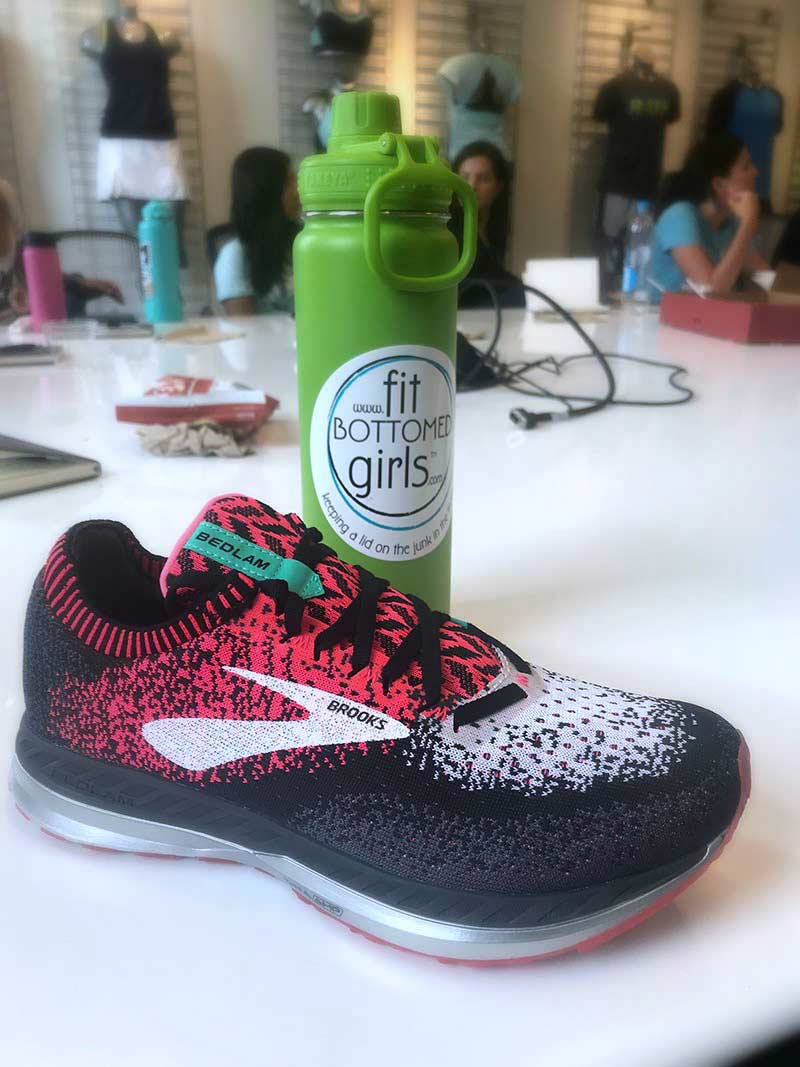 We headed back to our hotel for a short break, and, let me offer you a word of advice. If you have a chance to stay in an EVEN Hotel, jump at it. Not only did they have a variety of cold plain and infused water available in the lobby 24/7, but every room comes equipped with a mini gym … including a foam roller. Do you know how life-changing it is to have a foam roller available after flying across the country? I actually skipped out on some Saturday afternoon sightseeing in order to roll out a few kinks before dinner. Hurts so damn good.

Oh, and speaking of dinner, let’s talk about food for a sec, because the Brooks team knows that we love eating almost as much as we love running. Friday night, they set us up with a fantastic space at Westward, which I’ve actually been to with friends and both times, the food, service, and location has blown me away. Be sure to make a reservation, even if you just want to cop a squat in the Adirondack chairs by the water. 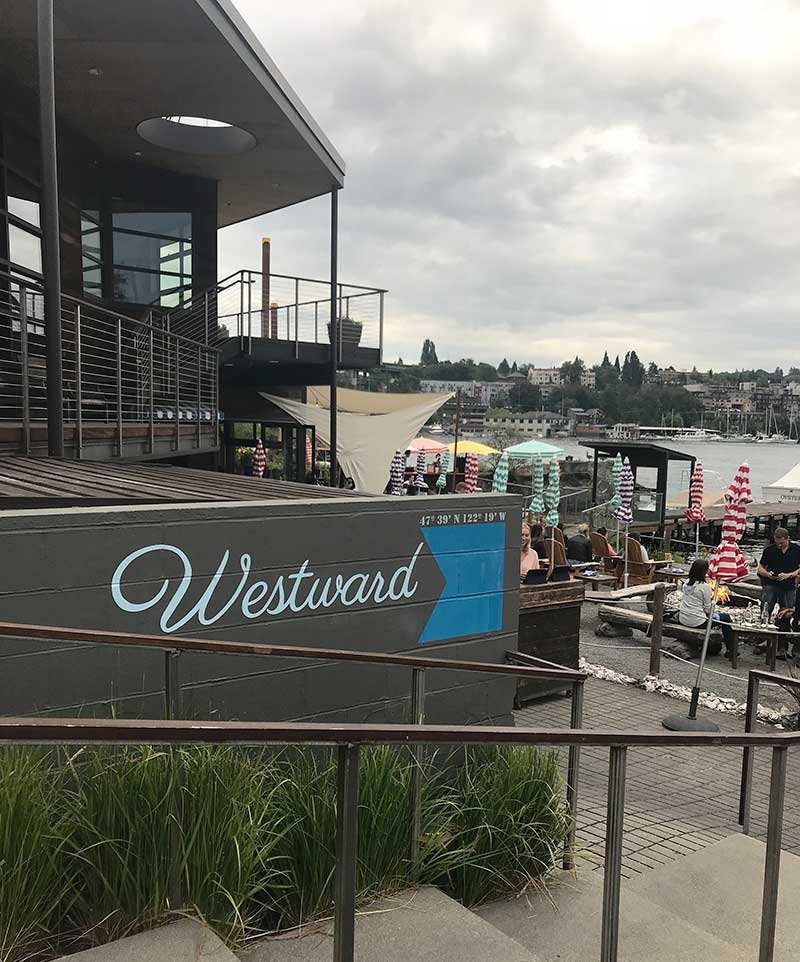 Saturday, we enjoyed a private brunch at Cactus, and I have two words for you: churro waffles. And also huevos rancheros … and it turns out that a prickly pear margarita is a perfectly acceptable (and delicious) post-workout brunch beverage. Highly recommend.

Our final dinner out was on a dinner cruise on Lake Union and Lake Washington, where I got the scoop on where Bill Gates lives (it’s … spacious) and even got to take the wheel for a few minutes. I rather like driving a yacht, guys. 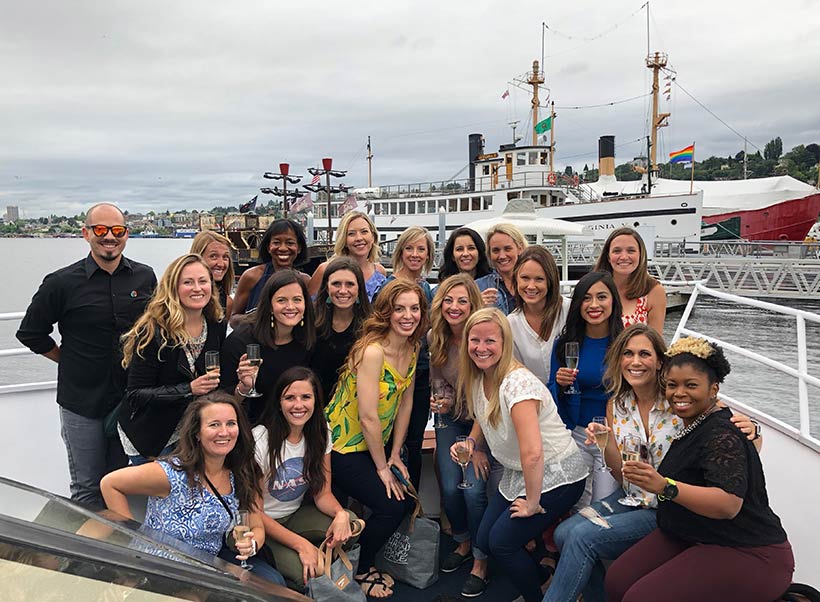 Of course, we were really all brought together for our love of running and the Run Happy culture, so I was thrilled when all 20 or so of us had a chance to say a few words about what “Run Happy” means to us, or share a moment that epitomized the phrase. If you have a group of running friends, use it as a topic at your next post-run coffee stop, because the stories that came out of it … well, we literally laughed, cried, got inspired, and respected one another even more.

We met up with a few of the Brooks Beasts on Saturday morning to do a group run. Much of the group (is very speedy, and) went a full five miles. I kept it to something closer to 3.5 since I’d run almost 4 the day before around Lake Union with Lora, from Crazy Running Girl. Happily, one of my fellow Floridians, Meghann, of Meals and Miles, offered to hang back and keep me company. It feels SO GOOD to run in temperatures that are unlikely to boil me alive! 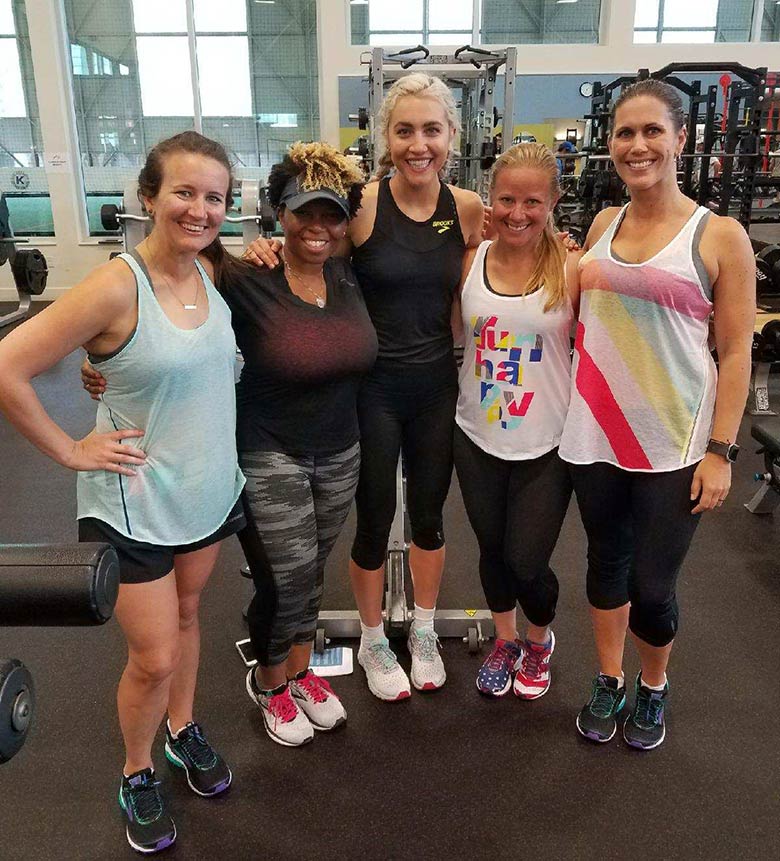 It won’t surprise you to learn that we were hooked up with some new gear upon arrival, and I’m over there on the right sporting my new favorite Ghost Tank (I already wear it in other colors allll the time, but this pattern is super fun!) and the Go-To Capri — both are soft, lightweight, and fast-drying. I’m extra-Ghosty because I’m wearing the Ghost 10 (Special Olympics edition), but you’ve gotta check out the shoes on Lora, who’s next to me — those limited edition Launch 5s are AMAZING.

After the run, we popped into Magnuson Athletic Club, where the Beasts split us into groups and took us through some of their strength training workout, and I landed with Hannah Fields (middle of the picture) — which was particularly cool because I’ve really enjoyed following her on Instagram since meeting her last year in Albuquerque. None of the moves were terribly complex, but they were all super effective. And OBVIOUSLY I’ll be sharing the deets with you in the coming weeks, because who doesn’t want to hit the gym like a Beast?

As if running (and eating) my way around Seattle with my fellow #runhappy ambassadors wasn’t amazing enough on its own, last weekend I also had the opportunity to volunteer with @brooksrunning at the Special Olympics U.S.A. Games — and it was INCREDIBLE. More coming soon on the blog, but in the meantime, I HIGHLY encourage you all to look into opportunities to help out with this organization. 💙 Just being a part of the cheer line was one of the most powerful experiences of my life, and I can’t wait to do it again. — FBG Kristen . . . . Huge thanks to Brooks for sponsoring this trip and creating this amazing opportunity, and good luck to all the athletes competing this week. You’ve got this! 💪🏻💪🏽💪🏿 #risewithus #rha2018 #specialolympics #volunteer

Being Inspired AF at the Games

Now, the big finale — the Special Olympics USA Games. I’d gone in with no idea of what to expect, other than I knew we’d be part of the cheer line, and that there would be 4,000 athletes and coaches, 10,000 volunteers, and 14 sports being played. Many other members of the Brooks family were there to volunteer as well, and filled quite a long section of road with smiles, signs, and high fives as the Parade of Athletes made its way past us. Each athlete walked with the other representatives from his or her state, and even though I wasn’t there for all 50 states to come by, I can’t begin to tell you how many high fives and smiles I exchanged — but I can tell you that my face went into an actual spasm from smiling too hard and feeling so much emotion. I felt such pride for these athletes, even though I’d never met any of them before. I know it might sound a bit trite, but it truly felt like all of them were absolute winners for being there, regardless of performance. I felt like one just being able to cheer them on.

Want to get involved in the Special Olympics? You can learn more here — there are both short- and long-term opportunities for people of all ages. 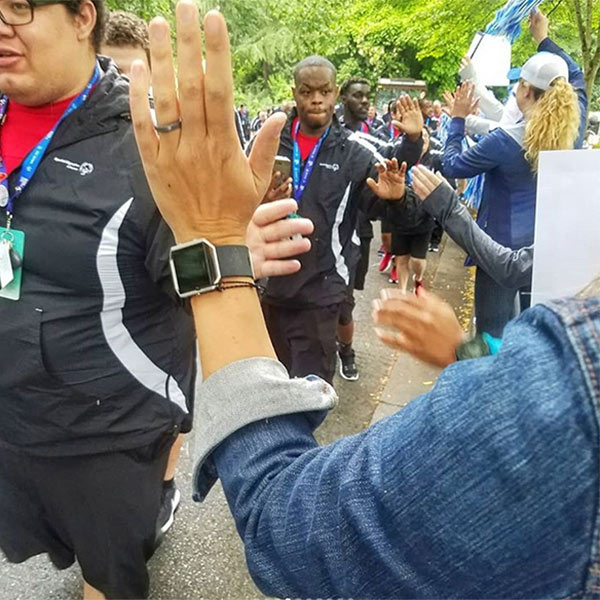 Once again, I have to give a huge — and special — thanks to Brooks for bringing us all together for such an incredible event. Danielle and Alina, our hosts, just knocked it out of the park. And if any of you are looking for other blogs to read or Instas to follow, check out my fellow Run Happy Ambassadors: Jen, Sara, Noelle, Brian, Jesica, Janae, Lora, Monica, Tina, Gina, Alex, Carlee, Tiffany, Jen, Natalie, Anne, Meghann, Emily, and Ashley

Have you ever volunteered for a Special Olympics event — or any other athletic event that left you completely changed for the better? Let’s start a list! —Kristen