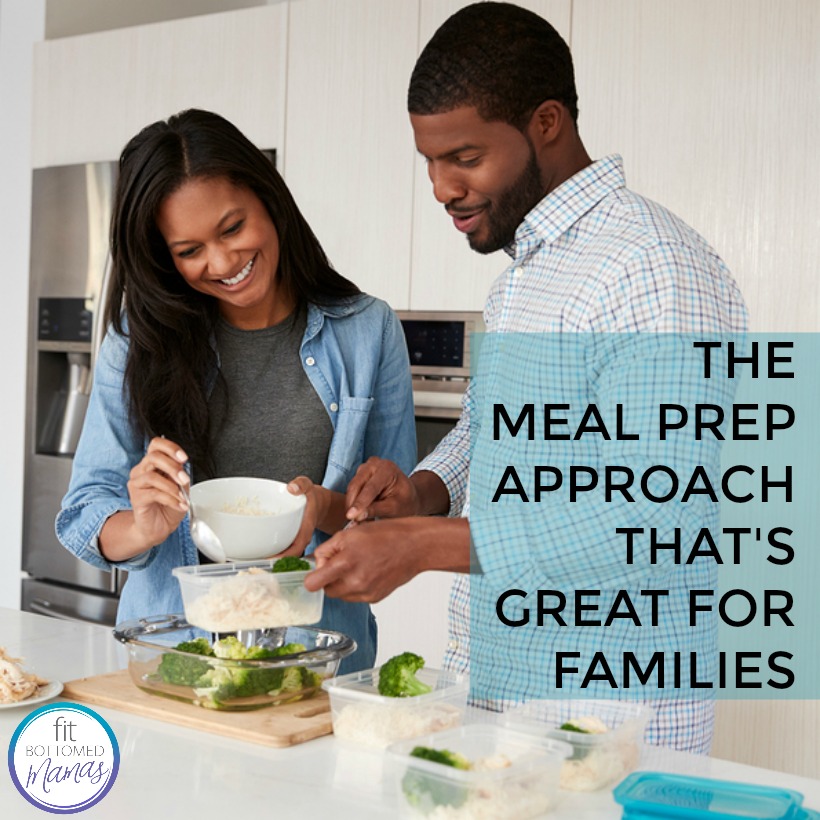 One of the things I thought a lot about when pregnant with twins was food. Not only because my appetite was off the charts, but also because it was hard to imagine what dinnertime would look like once we added two newborns in to the mix.

When I had my daughter, I learned (the hard way) that on many nights, even the simplest of dishes was almost impossible to cook — and maybe even harder to eat — when you had a little one cluster feeding or teething or going through a developmental leap or just needing extra comfort (read: refusing to be put down).

Yes, we did takeout. Yes, we did some freezer meals. Yes, friends and family dropped off food. And, yes, pizza was ordered — and microwaved and oven-baked (usually with tater tots). But, as a couple who likes to cook, this was a big ol’ change for myself and my husband. And, one that — once our daughter got a bit older — didn’t last. We pretty much immediately got back into cooking as soon as our sanity let us (which I want to say was around six or so months — it pretty much became our entertainment/family time on the weekend).

Suffice it to say that this time around it’s different. Two newborns, one four-year old, and a whole lot more experience has us looking at cooking with a new approach. One that 1) has a low bar of success, 2) makes logistical sense, 3) saves us time and money, and 4) can actually work with our schedules. Eventually, it’ll also need to feed more mouths.

During my pregnancy I was sent Cook Once, Eat All Week: 26 Weeks of Gluten-Free, Affordable Meal Prep to Preserve Your Time & Sanity by Cassy Joy Garcia of Fed + Fit and it felt like she wrote the book for us. None of the recipes were complicated or fussy, but they were filling, quick, nutrient-dense, pleasing to kids and adults, and they were designed with a batched ingredients approach that allowed for both (or either!) prepping and making full meals on the weekend or just prepping on the weekend and cooking warm meals with those prepped ingredients during the week. 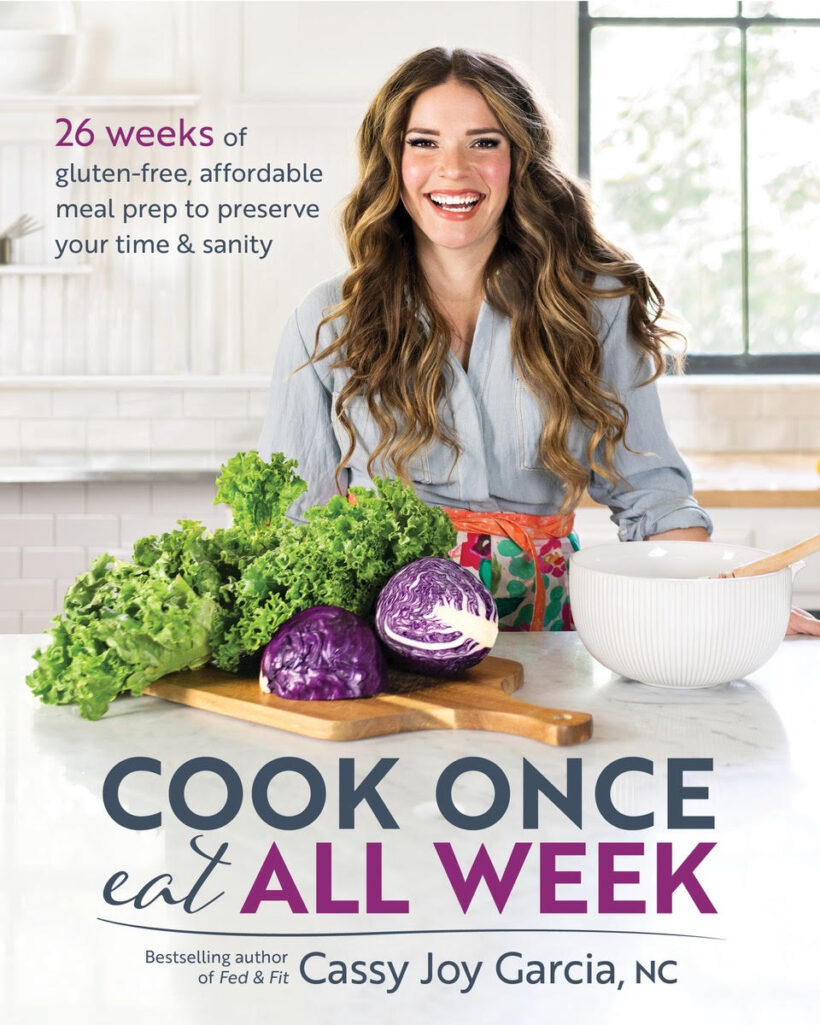 We’ve followed a number of weeks from the cookbook and while the recipes themselves haven’t been life-changing from a foodie perspective (they’re your basic healthy eats), they have given us a better batched approach to making healthy meals at home — and allowed us to cook more by doing less.

Granted, it’s still not a cooking approach we’ve taken with newborns every week, but with infants? Yep, much more doable. And definitely something we can see ourselves doing as the girls get older.

Because I have a feeling that we’re not the only family in this cooking and life situation, I’m pretty psyched that we get to share not just one, but a whole week of recipes — plus prep day directions — from Cassy’s cookbook. This will give you a really good idea of how her system works — and how it can save you time, money, and sanity.

Now let’s get to week one of the recipes!

This week brings together three healthy cooking mainstays — chicken breasts, fresh broccoli, and rice — in three totally different recipes! You’re going to mix and match so that you’re never bored. First up is a BBQ Chicken and Rice Casserole that hides broccoli in a brand new way. Then we dive into a tangy and creamy White Chicken Chili. Last up is a classic Chicken and Broccoli Fried Rice that’s even better than takeout.

To make this week low-carb:

To make this week Paleo:

To make this week grain-free:

To make this week dairy-free:

Today you will be cooking and shredding chicken, cooking rice and bacon, and prepping broccoli florets, a yellow onion, green onions, cilantro, garlic, and carrots. I find it most efficient to get the chicken going first since it takes the longest to cook, and then get the rice and bacon going, and while those two are cooking to do the raw vegetable prep.

Cook and Shred the Chicken

Cook Time: 20 minutes or 8 hours, depending on method

2. Cook the chicken using one of the three methods below:

Cook and Chop or Crumble the Bacon

2. Lay ten strips of bacon on a rimmed baking sheet and bake until crisp, 12 to 18 minutes. The total cooking time will depend on the thickness of your bacon.

3. Remove from the oven, transfer the bacon to a paper towel–lined plate, and let cool. When the bacon is cool enough to handle, coarsely chop or crumble 6 of the bacon strips. (If you used thick-cut bacon, chopping it will be easier; if you used regular bacon, crumbling it will be easier.) Put the chopped or crumbled bacon in an airtight container and label it “6 Strips Bacon.” Repeat with the remaining four strips of bacon and put in a separate container labeled “4 Strips Bacon.” Store in the refrigerator for use later in the week.

3. Store the broccoli “rice” and florets in separate containers in the refrigerator for use later in the week. Label the rice “Casserole” and the florets “Fried Rice.”

Dice a yellow onion, then store in the refrigerator for use later in the week.

Thinly slice one bunch of green onions, or until you have ¾ cup of sliced green onions. (You may not need the entire bunch.) Store in the refrigerator for use later in the week.

Shred two medium-sized carrots either with a box grater or with the shredder attachment of your food processor. Store in the refrigerator for use later in the week.

Mince five cloves of garlic, or until you have 1 tablespoon plus 2 teaspoons of minced garlic. Store in the refrigerator for use later in the week.

Grate a 1½-inch piece of ginger until you have 2 teaspoons of grated ginger, then store in the refrigerator for use later in the week. 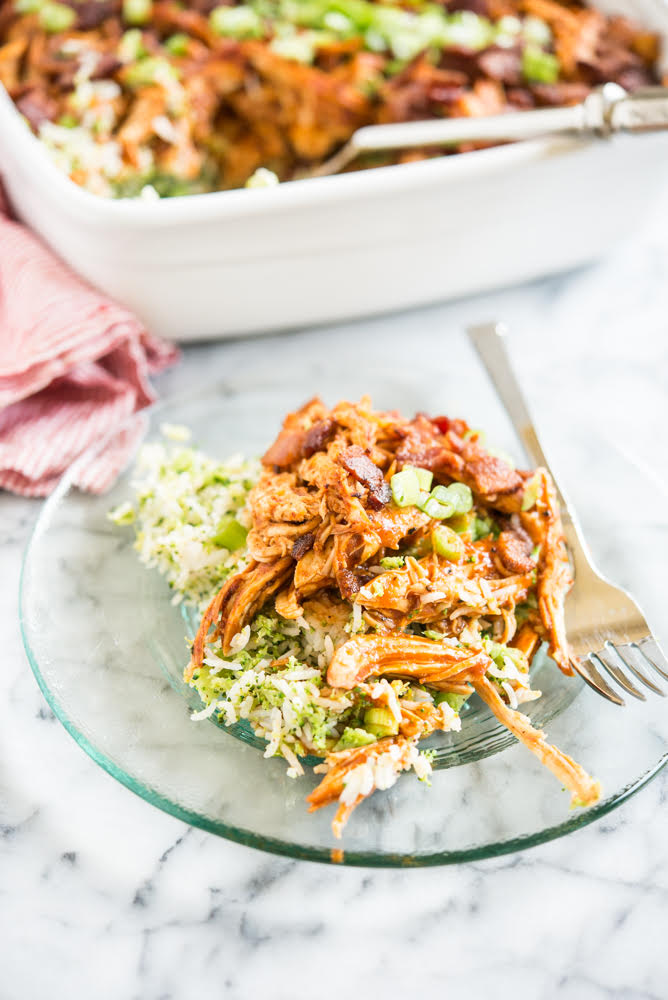 2. Melt the butter in a large sauté pan over medium heat, then add the broccoli “rice.” Season with 1 teaspoon of the salt and cook for 3 to 4 minutes, until softened. Remove from the heat.

3. Add the cooked rice, garlic powder, pepper, and remaining teaspoon of salt to the pan with the broccoli. Toss to combine, then transfer to an 8-inch square casserole dish.

4. In a medium-sized bowl, toss the shredded chicken with the BBQ sauce, then spread on top of the broccoli rice mixture. Top with the bacon.

5. Bake for 30 minutes, or until the top just starts to brown.

6. Remove from the oven, garnish with the green onions, and serve! 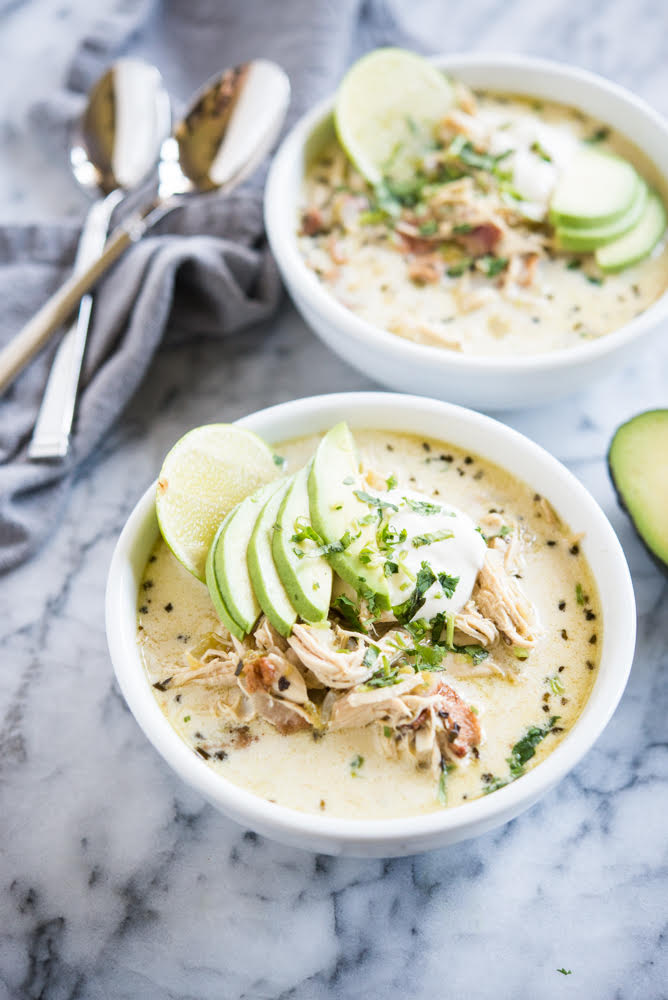 1. Heat the olive oil in a large saucepan over medium heat. Once hot, add the onion and garlic and sauté for 3 to 4 minutes, until the onion is translucent.

2. Add the green chilis and cook for 1 minute, until fragrant, then add the shredded chicken and seasonings and stir to combine.

3. Pour in the chicken broth and increase the heat to medium-high. Stir in the beans and corn. Cover and simmer for 10 minutes, then turn off the heat and stir in the sour cream, lime juice, and bacon.

4. Garnish each serving with avocado slices, cilantro, and a lime wedge and enjoy! 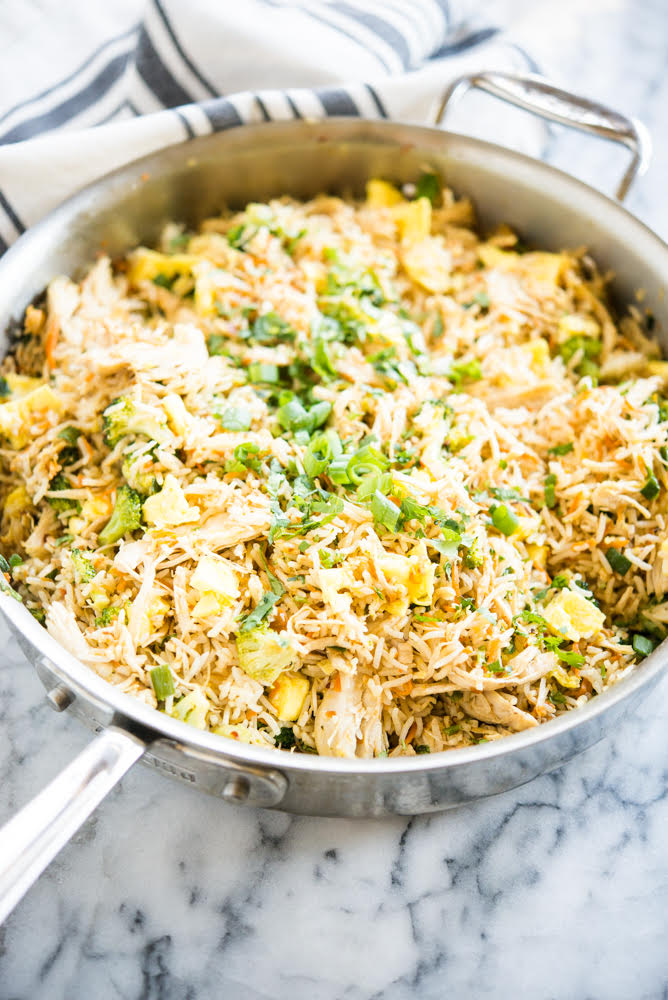 1. Heat 2 teaspoons of the oil in a large sauté pan or wok over medium-high heat. Once hot, add the whisked eggs, if using, and scramble until cooked through. Remove from the pan and set aside.

2. Add 1 tablespoon of the oil to the pan, then add the ginger and garlic. Cook for 30 seconds, until fragrant.

3. Add the carrots and broccoli to the pan and cook for 3 to 4 minutes, until slightly browned and softened.

4. Add the chicken and ½ cup of the green onions and stir to combine with the carrots and broccoli. Sauté for 1 to 2 minutes, until the chicken starts to brown slightly.

5. Add the remaining tablespoon of oil, then add the cooked rice, coconut aminos, sesame oil, salt, and red pepper flakes. Mix together, then cook, undisturbed, for 2 to 3 minutes. Stir once more, then cook for an additional 2 to 3 minutes.

6. Taste and adjust the seasoning, if needed, then remove from the heat. Garnish with the remaining 2 tablespoons of green onions and the cilantro and serve!

Tell us: do you meal prep or like to cook like this? It’s pretty great to prep a bunch one day so that cooking dinner is a breeze for three nights a week! –Jenn