Is there such a thing as fast-food karma? ‘Cause if so, I’m screwed.

On a recent road trip, I did something that I hadn’t done in years: I went in to a McDonald’s to eat dinner. While I do frequent McD’s drive-thrus for the occasional vanilla cone, coffee or even a salad to take back to the office for lunch, I rarely actually go inside and eat a full meal there. However, for this trip, we were in the middle of nowhere…and hungry. We were not alone. 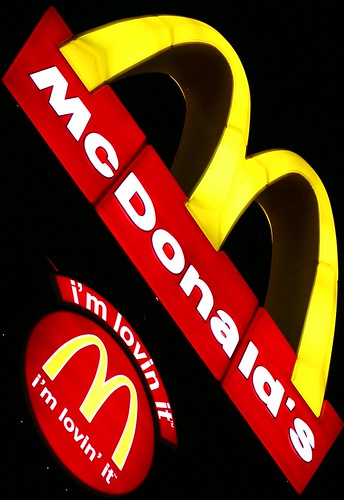 At 6:30 on this Friday night, I walked into the rural McDonald’s that was swarming with fellow road trippers. Most were families with at least two kiddos in tow. I joined the shortest line I could find and started looking around. It looked like Mickey D’s had remodeled since I’d last been in the chain. Instead of the signature red, white and orange décor, this one was decorated with neutral colors and looked kind of modernistic. Despite this, the smell and feel of the place was just as I remembered—loud and filled with the smell of greasy, french fries (a smell that I have to admit is pretty darn intoxicating and irresistible).
While in line, the woman behind me started asking her toddler basic questions. “What color is the this?” “How many straws am I holding?” “What is your name?” Normal kind of stuff that you’d ask a kid of roughly two years of age. With each question, this little girl took a little prodding to get the answer out. She carefully thought about each and had to be asked the questions numerous times before answering. Then the mother asked her daughter, “Where are we?” (I’m sure you can see where this is going…)

While I had been listening to this conversation with amusement, I turned around in horror. Do kids these days really know the branding of McDonald’s before they can identify the color yellow?

I’m not a mother, and I know that my friends who are say that no matter how hard they try to instill a healthy lifestyle into their children, it’s just darn near impossible to compete with the marketing on TV and the toys in a Happy Meal. So, I guess I shouldn’t be so aghast at this, but I was. I know fast-food joints are improving their offerings by making apple slices and milk available instead of fries and soda—but still. That’s disturbing.

However, I still stayed in line. And even ordered fries. Turns out I, like the kid, was drinking the McD’s Kool-Aid, too. I ate the fries, along with my grilled chicken sandwich and Diet Coke and felt like total crap afterwards. In fact, my husband took over the driving because I was so sleepy. And about two hours after the meal, I was hungry again.

“Yes, this is why we don’t eat fast food regularly,” my healthy eating conscience told me.

Lesson learned. I should have packed a cooler of healthy foods or at least scrounged up an apple, mozzarella stick and water at a gas station. But I didn’t. At the least, I should have gone through the drive-thruand ordered a salad. The FBGs always preach allthings in moderation, but if I’m going to splurge, I’d rather it be on something really tasty, not high-fructose corn syrup.

I kind of feel like that God punished me for going into McDonald’s. Yes, I’m being slightly dramatic here, but between the overcrowded dining area, screaming children and how craptastic the food made me feel, it wasn’t pleasant. My experience with the young girl behind me was truly disheartening, and I re-learned exactly why I stopped going Ronald McDonald land.

Sure, I may still sell out and hit the drive-thru every now and again, but the FBGs aren’t about perfection. However, I do have my morals. Once we arrived at our vacation destination, I located a local farmer’s market and stocked up on apples, tomatoes and even a variety of small pears that I’d never heard of before. That should undo any bad karma, right? I sure as heck hope so. —Jenn