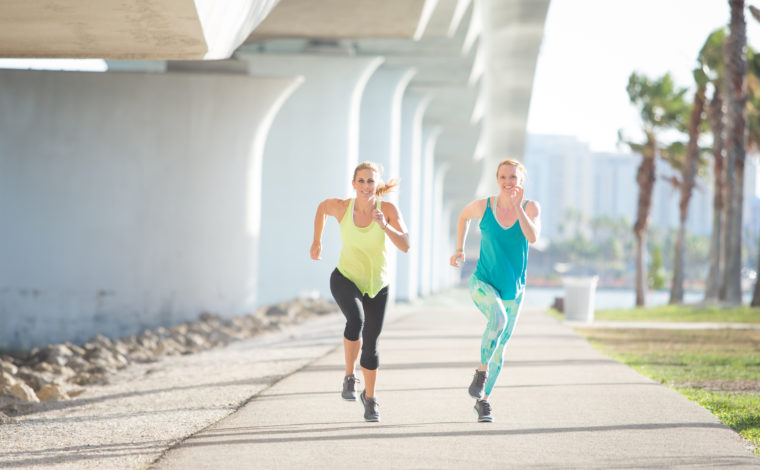 It began as a single blog with a tongue-in-cheek play on a Queen song. Today, the Fit Bottomed World, run by Jennipher Walters and Kristen Seymour (who are certified fitness professionals — Jenn is a certified personal trainer and health coach, and Kristen is certified in triathlon, swimming, and TRX coaching — but also just everyday regular women), is an online phenomenon reaching millions of women (and men!) each month. And, of course, the focus is always on the idea that fit bottoms come in all shapes and sizes — and that you’re more than the number on the scale.

(And they know because they’ve been there. Read Jenn’s personal story here, and Kristen’s here.)

True pioneers of the body-positive movement, Jennipher Walters and Erin Whitehead began Fit Bottomed Girls in 2008 as friends looking for a fun, fresh and no-diet approach to being healthy. Months after the site launched, it took off — readers were clearly hungry for something other than “how to lose 10 pounds in 10 minutes and get the perfect man.” Infusing their own experiences (both failures and successes) they created a community of “FBGs” — welcoming everyone in, including writer Kristen Seymour, who would later become a business partner.

In 2017, Erin left the company to pursue other interests and focus on her family, while the Fit Bottomed World expanded into more speaking engagements, retreats, and brand consulting. Jenn and Kristen also continue to work with major brands such as Brooks Running, Marshall’s and Pure Protein on campaigns and other influencer projects that are fully aligned with the Fit Bottomed Girls’ mission. In fact, Jenn and Kristen were named as one of The 100 Most Influential People in Health and Fitness by Greatist in 2016 and 2017, and were listed as one of the best healthy living bloggers of 2018 and 2019 by Healthline.

And the one thing that will never, ever change is the company’s mission to continue to let women (and men!) know that you simply can’t hate yourself healthy.

Multiple advertising, influencer, and sponsorship opportunities are available on the Fit Bottomed Girls’ website, email, social media accounts (including Mamas, Eats and Zen as well) and podcast for products and brands that are aligned with its mission. Spokesperson roles, consulting, product development, appearances, speaking engagements and brand endorsements from owners Jennipher Walters and Kristen Seymour are also offered. For a media kit with more information on opportunities, including specifics on reach, pricing and availability, contact advertising@fitbottomedgirls.com.