You think I’m kidding…”Oh funny Tish, Was the iddy biddy race willy willy hawd?” I shall slay all doubters with my muddy, rusty Spartan sword for that kind of talk!

I am officially one of those crazy nuts who has finished the Spartan Race and lived to talk about it. I have to warn you. This post is not for the weak of heart. I’m about to share with you the race’s truth. A truth so brutal and visceral you might just throw up in your mouth a little bit. You MIGHT just need an asthma inhaler. That race was THAT hard, ya’ll. Basically, it’s for those who are bored with traditional races. It’s three miles of obstacles and death-defying bafoonery. You jump over fire for Pete’s sake! 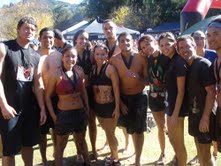 Let us begin with the pre-race mentality of me and my group. We were all goofy and energetic an hour before the race. We were warming up together and laughing. We were confident because we had been training for 10 weeks for this bad boy. Bootcamps were held every Wednesday, and we were strongly encouraged to do the same workouts at least two other times during the week. I happen to also be training for a half marathon I’ll be running in January, so I figured I was set. We were all wrong…

Fourteen people* from my job decided to do this race. While I had a personal team of four (my guy Mark, my gal pal Celina and her fiancé, Omar), all 14 of us met up at the starting line as a team. I asked everyone around me how they were feeling. Most were pumped, while one honest gentlemen said he didn’t feel like a Spartan. He felt like a German. I was personally scared out of my mind. First of all, I didn’t have Jenn there who just happens to be my runner’s rock. I also was snot-rocketing every couple minutes and clearing my throat—the product of a three-week cold I couldn’t seem to shake. Before I knew it, we were off. The very first obstacle was the fire, and I choked. I stopped right before that dang thing and made at least 30 people bump into me. I did it though. One leap and I had run through my first scary fire. I immediately started singing “Through the Fire” by Chaka Khan.

The Hills Have Our Thighs

I know some of you are looking for a new adventure, and you’re seriously considering this race. I want to give you the real deal so you won’t make my mistake. My fatal flaw at coming in 86th out of the 115 in my heat was my ignorance of the terrain. The WHOLE run was uphill. I kid you not. I started running just like everyone else and started walking about a minute in…just like everyone else. Those hills were killer! The incline was so intense you had to hold on to branches and tree trunks just to get up. People were sliding back and tripping constantly. I swear I was looking for blood on rocks the whole time. I just knew someone was going to bite it hard. And was hoping it wouldn’t be me. 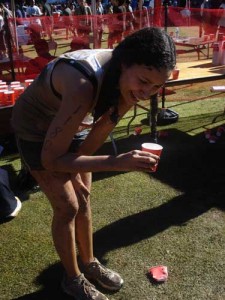 Me, Dying a Slow Death

Okay, so there are steep hills and there is dangerous, rocky terrain. We did sign a waiver, so while I was panting through the run/walk, I was still having fun. Then came the damn pond. I saw a dock looming ahead but I didn’t see the murky black water until I was on top of it. The Spartan Race volunteers were yelling at Celina and I to jump in. We looked at each other, gave each other the look and jumped, partially out of fear (those volunteers are mean!) and partially out of kiddie fun. It was hot. The pond sounded nice. Smelled like poo, but sounded nice. THE WATER WAS NOT NICE! The water was ice cold. My body immediately turned blue and my lungs started going into that weird shock where you can’t breath, but you’re making these weird grunting noises. Yeah, it was sexy. At that point, I was terrified. I looked back at my short little friend and saw that she was struggling staying above water. It’s so cold it’s hard to breath, let alone doggie-paddle to the end. Thankfully we both made it out alive, but I was snarling by the time I crawled out. I looked at the volunteers and wondered how in the world they could have just stood there as we panted for help. I got out and started cussing like a muddy wet sailor. No one ever said Spartan women were sweet.

I heard from some of the men in the group say they had accidentally drank the water. I’m pretty sure that pond wasn’t man made. It smelled of animal poo and ick, and I’m pretty sure it was swimming with friendly little bacteria just waiting to make friends with my immune system. Everyone post race was hacking and coughing. I don’t want to know what we were releasing from our lungs. YUCK!

It was a miracle I finished that race. Yes, I had a cold, but I doubt that was the reason I felt dead at the end of that run. Mark, my guy, is a trainer and one of those really annoying guys who is good at everything. He told me the hills almost killed him and that he actually walked in parts. That’s just scary to imagine the trail that could slow that type of dude down. There was no water AT ALL and people were getting mad. I heard people yelling for a medic a couple of times. At one point, I collapsed onto the ground and watched Celina’s lips move, but couldn’t hear anything coming out. When I came to, she was saying I didn’t look well and a volunteer gave me his water. Not cool man. 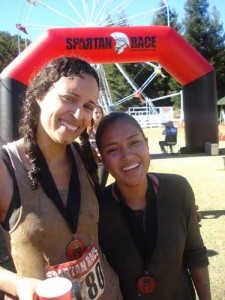 Celina and an exhausted, muddy me

When Celina and I finally crossed the finish line, we ran directly to the water cooler and started gulping. When we finally came up for air, we immediately started comparing our cuts and bruises to others in our group. Muddy and thankful…That’s what I told people who asked how I felt about becoming a Spartan.

Will I do it again? Well, a friend of mine was watching the race as a spectator and I think she caught the bug so I may be trying this again next year, but I can guarantee I’ll be making sure to take my antibiotics and practice my fire-jumping a tad bit more!

You see, it’s never really about the race. The actual races, whether they be marathons or 10K runs are hard and far from delightful. People run them because they feel this amazing rush of accomplishment and pride once that medal goes around their neck. I like being able to say I’m a Spartan woman. It’s kind of bad ass…Even if I probably wouldn’t have made the true Spartan team back in the day. —Tish