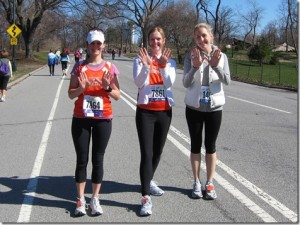 For the past month, I’ve been training for the More Magazine and Fitness Magazine Half Marathon for Thomas’ Bagel Thins. And while I haven’t been overly rigid about my training, I did feel like I was ready to run most—if not all—of the 13.1 miles. But sometimes life throws some curve balls at you. Like big ones that make you want to crawl up into the fetal position and never see the light of day again.

Okay, so I’m being way melodramatic, but I was excited to run. And I was super excited to travel to New York City, hang with some other cool bloggers (Tina of Carrots ‘N’ Cake, and Caitlin of Healthy Tipping Point,what what!), and see my fabulous friend and partner in FBG-crime Erin (aka Fit Bottomed Mama). But, alas, my body had other plans. Like getting a 101-degree fever the day before the race. *Hits head.* So those fabulous plans to visit friends, snuggle with Erin’s adorable daughter and generally not feel like a sick leper (I always feel so infectious and gross when I’m sick)? Out the window. 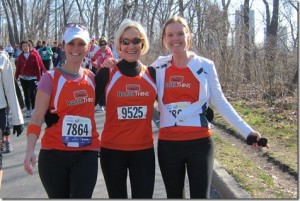 But, surprisingly, what came in the window was wicked awesome. Perhaps maybe even more awesome than running! (I won’t go all Adjustment Bureau on ya, but I do feel like it was meant to be.) The first night in NYC I had a great meal and made new pals with the aforementioned bloggers and two of the PR peeps from Thomas’ Bagel Thins (who gave us the sweet orange tanks you see us wearing above). Day two—because I felt like hell—I laid around watching not one but two guilty-pleasure chick flicks, Bride Wars and Sex and the City 2, only venturing out to pick up my race packet, eat,  and meet Erin and her hubby and daughter who graciously changed their plans to meet me in the city for dinner.

Day three was race day. And although my fever was down, there was no way my body could handle running 13.1 miles. Turns out, Caitlin was injured and has another bloggy friend Gabriele of Une Vie Saine who was also injured. So what are three not-in-perfect-running-health girls to do? Walk like mo-fos. And that we did.

The weather was a brisk yet beautiful 50ish degrees, the sun was shining, and we spent three and a half hours just jabbering away as we walked our little hineys off. Although by no means did I feel my best, the conversation and the beautiful scenery kept me going, laughing and smiling. Plus, we got to meet one hell of a 70+ year old woman who has run more than 100 marathons and looks like she’s not a day over 50 (Elaine’s pictured above). It was great—low stress, no nerves, no pressure—just out there being active.

So, pretty much it’s the best time I’ve ever had being sick. I listened to my body, took it easy, refueled with healthy foods and now I’m back to watching terrible/awesome films on HBO to rest. Although it’s not what I envisioned, it’s damn cool. Walk on! —Jenn